October 21 2017
85
The protesters at the building of the Verkhovna Rada of Ukraine began a meeting in which several hundred people took part, they put forward new demands to the president of the country, Petro Poroshenko.


On Friday, former participants in the military operation in the Donbass declared that they had taken responsibility for the further organization of the protest action at the Verkhovna Rada. Earlier, the independent parliamentary deputy Yury Derevyanko said that the protest outside the Verkhovna Rada of Ukraine was divided into two sectors: military and civilian. 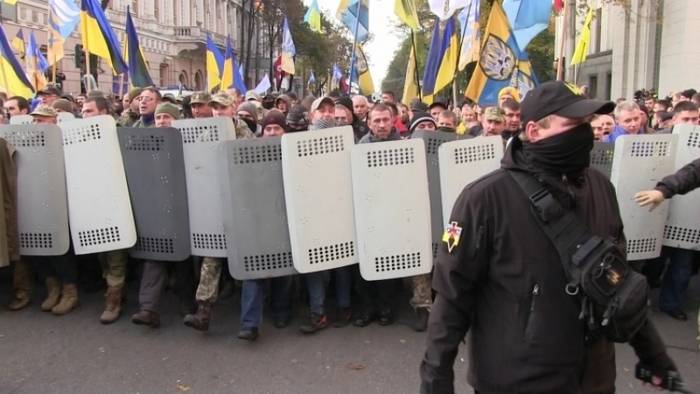 Ultimatum to Petr Poroshenko — within five working days you, Mr. President, have to submit an impeachment law to parliament. This does not specifically concern your personality, this concerns our Ukrainian people.
- A fighter from the Donbass battalion with the call sign “Katana” said Saturday during the meeting.

He also said that the protesters are demanding that the president submit a bill on the anti-corruption court to parliament.

If our requirements are not met, we will show who we are and what we can do. Do not force us, Peter Alekseevich. Remember history in romania ceausescu
- declared "Katana".

Protesters erected in the tent camp on Grushevskogo street near the Ukrainian parliament a small stage, which the former participants in the military operation in the Donbas perform. Mostly people in camouflage uniforms with chevrons of the Donbass battalion take part in the veche.

Earlier, the organizer of the rally, ex-Governor Mikhail Saakashvili, said that the protesters will remain at the walls of the Rada until President Poroshenko’s resignation.

Ctrl Enter
Noticed a mistake Highlight text and press. Ctrl + Enter
We are
85 comments
Information
Dear reader, to leave comments on the publication, you must to register.