Limit as a burning issue of the modern Russian army 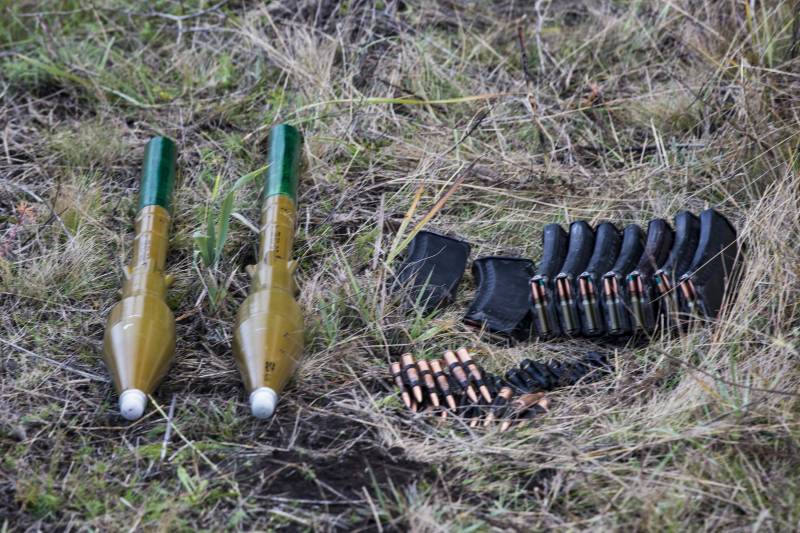 We have long thought whether to raise this topic at all. Should I throw a spoonful of tar in a barrel of honey or add black paint to a beautiful picture of the combat training of our units? But the term “beautiful picture” itself, perhaps, is the reason.

The picture is, in fact, what all the media are going to do exercises and maneuvers. Today, two concepts should be clearly separated, for maneuvers are an exemplary show of the West-2017 type, arranged with a very transparent and definite goal, and the exercises are a daily process, let's say, within the army.

So, the picture. With BTU in the course of the next inspection of ZVO troops by the district command.

The picture is quite, the test passed with a rating of "good", which also inspires a certain optimism and confidence. What's next?

And then the fact that the picture did not fall. And left behind the scenes.

The next period of study has passed. "Army Games", "ARMY-2017", "West-2017". It all ended quite beautifully. But this is already a component of the management of the modern army and the military industrial complex, without which, obviously (but it is not clear, to be honest), today’s day is impossible.

On the other hand, from the number of sudden inspections that took place during this period, even the head was spinning. In one or the other district, parts and formations were alarmed and fulfilled various, often quite serious and complex tasks.

It is clear that the equipment must be sold for a weighty dollar, and for this it must be properly advertised and shown. It is clear that it is necessary to show systematically and regularly that from the taiga and to the famous seas our army is capable of hanging anyone. The question is only in volume and quality.

Talking with officers of various units, you catch yourself thinking that the army is really doing what it should be. Combat studies are coming. Soldiers are trained. Officers are teaching. Those who are supposed to participate in combat operations. However, this still causes concern and misunderstanding, you can hear quite wild words. Not very understandable by civilians, but familiar to any military man.

From the last: "Limit pulled up." It becomes clear why during the test for the battery of mortars (8 units) allocated as much 32 charge. You can shoot it. No, if it is hypothetical to assume that the crews practiced in advance, in the FAP, at "their" training ground, then yes. Why hypothetically? Well, simply because the “firing” ground is kind of close by and you can control it.

If we add to this the “corner of the eye” about shipped trucks with ammunition to Zapad-2017, then some things become clear.

Normal people may have a fair question: have you gone crazy there? Are there no cartridges and shells in Russia? Warehouses full of poke in the face?

Do not. We know about warehouses. But there is a difference between the ammunition allocated for the training process and the reserve in case of military actions. These are two completely different boxes. And the second is more important.

But what to do if you need to splurge? Six hundred meters in the "West" were infantrymen, watering targets on several lines. Artillery plowed the field as it would have been in actual combat use. And everything was successfully amazed.

Not surprising, by the way. For the "West" personnel were collected in all districts. And we went there as the "Army Games", the best of the best. Who does not screw up and do not miss the faces of the observers. So everything is really natural.

But back to those who did not get to the “West”. And he remained to pass the standards for inspections. And then they went not that complexity, not that window dressing, no. But it is necessary to turn out.

You remember the teachings you have attended, or you look through frames that did not fit into the picture, and you understand that here, too, “not everything is so simple”. The platoon control really controls each cartridge. And sometimes, when on the tower there are especially "harmful" inspectors, it is not a deception, but a tactical maneuver. Closer to the "eyes" puts those who are trained and can "show", and those who are neither fish nor fowl - far away, on the flank. Which is quite logical, the ammunition will burn, and the target will not hit. A platoon, company, battalion will not perform a combat mission.

Why, in the presence of three grenades for RPGs, three grenade launchers? One is truly a master. The commander is sure of it. And two are so-so. They can get, or they can pick up the parapet or shoot a mythical helicopter instead tank. And then oh how difficult it will be for the unit.

Now those who served before, smiled. The usual practice has always been. They taught everyone, but on shooting they tried to put "masters" on the most "dangerous" directions. The task itself will perform and help someone. Moreover, this is the skill of the commander in managing the battle. Use your strengths and hide from the enemy weak. The main thing was and remains - his Majesty Result!

I do not argue. So it will be. However, besides the task on specific exercises, there are others. More global and significant for the country. Strange? Does a young green lieutenant perform tasks significant for the country anywhere in Siberia or in the Far East? Not in Syria, not in the "West-2017", not in the army games. Yes, oddly enough, even in the usual distant garrison.

We are always preparing for war. The army and is intended. That's why we spend a lot of money on training soldiers and sergeants. We spend "in nowhere" from the point of view of our liberal fellow citizens. A soldier served a deadline and left. Do not drive a tank or mine the road. He went to build, study, plow the land, drive a bus in the city ...

But there is also a "modern" task. The one that was not in the Soviet Army.

Today, the platoon or company commander also looks at the footage. From dozens and even hundreds of conscripts look out for those from whom the Soldier can turn out. Who needs the army. And who needs the army. Remember your service. Surely everyone has such a "copy" in memory. “Balbase is terrible, but he shot like a god” or “a sapper from God, I understood mine in my gut” ...

The officers look out for future contractors.

And today, the "double basses" are the real core of the army.

But now a completely legitimate question arises, which we hear at different ranges, in different companies, from officers of different types of troops. How can you find a good tank driver if driving is limited? "Goryuchka" does not seem to be in short supply, but ...

And with gunners even worse. It’s not only in the fuel business, but the number of shots must also be thought about the resource of the barrels. And again: "shared" with the "West".

Maybe this very "tank genius" is now in the ranks. And they didn’t see him simply because he didn’t open up until the end while driving. I almost understood the power of the engine. Not "rooted" in the dimensions of the machine ...

And how can you find another specialist? Sniper, who is not allowed to shoot? Minesweeper, who once saw a combat mine in a class? A rocketman who wiped a rocket a year and had never participated in a real launch?

From television screens, from the pages of print publications, from the lips of our statesmen and the opposition, we hear about the budget deficit, about the tasks that need to be ... We clap our hands when our crews are winning at the games ... We are talking with an understanding the need to "find reserves" and the "effectiveness" of the use of available forces and means.

Winning games is great. But these are games, these are competitions of the best of the best. But after all, in the event of something, it will be necessary to win not to master athletes, and not to the pilots of aerial teams.

By the way, they are just that reserve, which in that very case will be preparing replenishment. None "Swifts" or "Russian Knights" with bombs will not send to the BR.

And what about the lieutenant or the captain from the usual part? How to be the commander of this unit? How to teach people if deficiency is everywhere? If every liter of fuel or every cartridge is registered? Not because someone can steal. Not. Just "you allocated." Limit.

The Russian army today has really changed for the better. There are many things that make us proud of her. But the old approaches to supply simply vybeshivayut, to be honest.

It is clear that the level of a platoon, company, battalion and even a regiment is not the one from which you can shout to the minister or the head of the relevant department of the Ministry of Defense. Every hare wears its ears. But it is not clear why the generals so quickly forget their own officer youth. Own platoon, company, battalion? Or do warm rooms affect memory? Strategist can not be a tactician?

But any strategic task is solved by tactics. In order to turn "front", these same companies and battalions must turn. And not on the map, but on the ground. Under enemy fire. So give the unit commanders the opportunity, we repeat, the opportunity, to make their units capable of carrying out your strategic ideas.

We repeat for the third time that in no way do we criticize all these managerial things like exhibitions and maneuvers. But we advocate that in the modern Russian army as much time and resources as possible should be devoted to combat training.

Tvardovsky in the famous "Vasily Turkin" has the lines: "Ensure, since I am worthy. And you all must understand ..."

Yes, Twardowski writes about the award for the hero. Only after all, in order for heroes to appear, you need to grow them. To train. Inspire confidence in your own strengths. Self-confidence weapons. And such confidence gives not so much theoretical as practical possession of these very weapons. Practical!

It’s a paradox, but behind the scenes comrades senior officers (from a major and above) mostly do not talk about preferences or indexing money allowances. Although it was not indexed with 2014, despite the increase in prices. And not even on the topic of really huge workload and documentation that has grown at times. And it comes to the slowness of the army system and these limits.

And here the conclusion was: the limit should not be when it comes to proper training of soldiers.

It is clear that if the army is “entered” by a man, he will sign a contract. Everything is clear here. And if not?

Those who did not go to contract service, should not become in the future "cannon fodder", fattened, but untrained. We just can not afford it today. So, taking into account that the service life today is only one year, this year must and must be used to the full extent. Drive tanks and armored vehicles, shoot, dig, run, disguise.

Learn military in a real way.

And then what limits can we talk about?

Ctrl Enter
Noticed a mistake Highlight text and press. Ctrl + Enter
We are
Lies and truth about the deaths of soldiers in BogucharResults of the week. “If I am leaning against a warm wall in a quiet place, then I’m still nothing at all!”
80 comments
Information
Dear reader, to leave comments on the publication, you must to register.