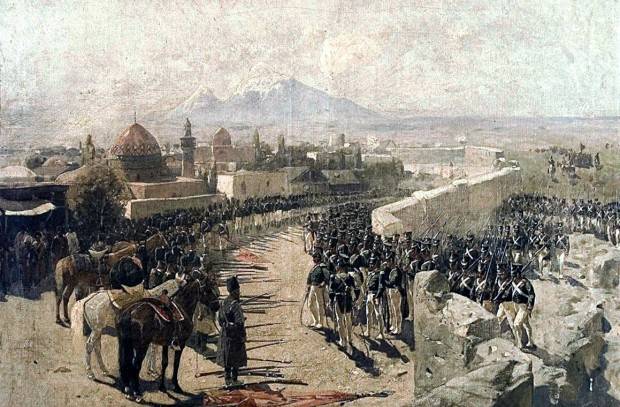 After the Russian troops liberated Erivan from the Persians, Armenians all over the world praised Russia. "Armenia was resurrected thanks to the Russians," they noted

In the 17th – 18th centuries, the Erivan khanate was the scene of struggle between the Ottoman Turks and the Persians.

All this time the Armenians waged the liberation struggle for their independence, in it they relied on the support of the Georgian king Vakhtang VI, and then the Russians. Armenians of the Erivan Khanate fought on the Russian side in the Russian-Persian wars.

The capture of the Erivan fortress was one of the last episodes of the Russian-Persian war of 1826-1828. The Russian army under the command of General of Infantry Ivan Fyodorovich Paskevich stepped up to the fortress of September 23 (old style).

Until now, Erivan was considered the “impregnable stronghold of Persia”, she stood on the steep cliff of the Zangi river and was well fortified, but the fighting spirit of the defenders of the fortress was far from fighting. Information about the success of Russian in this war significantly weakened it.

Therefore, it was not difficult for an experienced Paskevich to estimate how long a siege would take. “... Erivan will not last a few days,” he wrote to Emperor Nicholas I, with him and the General Staff Ivan Fedorovich was in regular correspondence. The same assessment was given to the manager of engineering works, MI. Pushchina: "In the cover of the day we shall cover and the fortress."

The shelling made by Russian cannons, located on the hills around the city, made a strong impression on the Persians. One of the first shells pierced the dome of the mosque, the second, breaking through the wall of the palace, tore up the portrait of the Shah of Persia. These were very symbolic hits.

The city was accelerated by the Armenian residents, over a thousand people lived in the city of Armenians over 18, they staged unrest and demanded the surrender of Erivan. The fortress surrendered, the sword of the garrison commander Gassan Khan, who once belonged to Tamerlan, was sent as a trophy to the Russian emperor.

The new owner of the sword was asked to repeat the military exploits of Tamerlane, who conquered the Turkish Sultan Bayezid, and "crush the enemies of faith and humanity." More recently, things were called by their proper names.

During the siege and capture of the fortress, Russian troops lost less than 100 people, three thousand enemy soldiers were taken prisoner, around 50 guns and 4 flags.

“Armenia has resurrected from the ashes ... and in this the Armenian nation is obliged to the human-loving Moscow nation, among which we can always live safely and protected,” wrote representatives of the Armenian diaspora in India.

Soon the war was brought to a final. According to the results of the Turkmanchay Treaty concluded, the Erivan Khanate with the ancient city of Erivan (Yerevan), founded as far back as VIII century BC King of Urartu Argishti I, became part of the Russian Empire.

Ctrl Enter
Noticed a mistake Highlight text and press. Ctrl + Enter
We are
The fall of the Erivan khanate. Brilliant completion of the second Persian warThe beginning of the Russian-Persian war 1804 — 1813 Battle for Erivan Khanate
299 comments
Information
Dear reader, to leave comments on the publication, you must to register.