Russian Grenadier - the protagonist of the Battle of the Nations 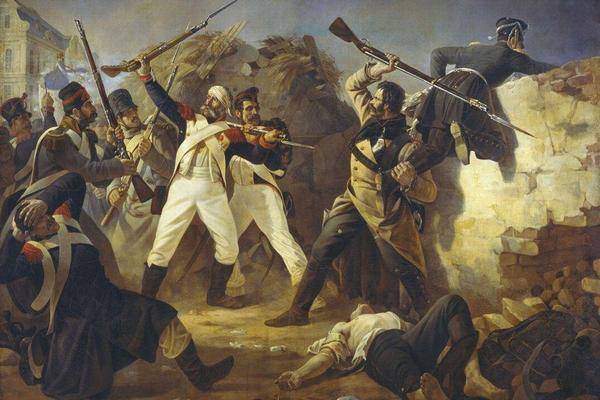 The feat of Leonty Korennogo, which he performed in the largest battle of the XIX century Leipzig battle, impressed even Napoleon

The grandiose plans of the great French commander Napoleon Bonaparte to conquer the whole world were broken by the Russians. Napoleon, having collected a huge army from almost all of Europe, moved it to Russia.

The ingenious strategist took into account many factors, but did not take into account the most important thing - a solid Russian character; a simple Russian peasant beat the Gauls and others like them, both in Russia and outside its borders, during the foreign campaign of the Russian army.

These words fully relate to the grenadier of the Life Guards of the Finnish Regiment, Leonty Korennoy. He proved himself in the battle of Borodino and in the battle of Leipzig, known as the Battle of the Nations.

Information about the place and time of birth of Leonty Korennogo did not reach us. It is known that he was recruited from the peasants and began service in the Kronstadt garrison battalion, then served in the Imperial police battalion, which in 1808 was renamed the Life Guards Finnish Regiment.

As an experienced soldier, to that having excellent physical characteristics, tall, powerful physique and unprecedented strength, he was enrolled in the 3-th grenadier company, which took the best soldiers. In this company, he met with the regiment of the Patriotic War and took part in the famous Battle of Borodino. Before the battle, the regiment was stationed at the village of Semenovskaya.

"The whole burden of the battle of Borodino, - historians note, - lay down on the parts located near the village of Semenovskaya."

Root this time was in the thick of battle. He was among the group of six grenadiers who held one of the strategic positions. For the shown courage of Korennaya, along with other distinguished 106-th lower ranks, received the insignia of the Military Order.

In the battle of Borodino, the Finnish regiment lost 554 man, up to a third of its composition, but together with other units continued to participate in hostilities: in the Tarutinsky maneuver and the battles of the Knyazhny, near Krasny, near the village of Good, and the subsequent foreign campaign and battles at Lutzen, Bautzen , Deeppiswalde and Leipzig.

In the battle of Leipzig, the Finnish regiment was located in the most important direction near the village of Gossy. The Finnish regiment tried to squeeze the enemy out of the village; in the bloody battle, the regimental commander General Maxim Kryzhanovsky was wounded four times. To speed up the assault, a group of soldiers and officers headed by Colonel Gervais decided to go from the rear, they rounded the village, climbed over a high stone wall and rushed at the enemy. The French did not immediately notice the attack from the rear, but rather quickly restructured and surrounded the group of brave souls.

A small detachment took up a defensive position near the fence, and since there was only one path of retreat — back through the fence, they helped the wounded to move back through it. Native supported colleagues: "Do not give up guys."

First, he threw all the wounded through the wall - growth and strength allowed to do it, and then he took it again weapon.

However, there were much more opponents, and the French put all those who did not manage to hide behind the wall. Root was left alone, the French offered him to surrender, but he fought to the last, and when the cartridges ran out, he began to fight off with the butt of his gun. The French floated the bayonets and plunged the Russian bogatyr to the ground.

We must pay tribute to the French, they did not finish off the Russian soldier, but even provided him with medical assistance. In the infirmary, where the grenadier’s wounds were bandaged, he was suddenly met by Napoleon himself, who decided to visit the wounded soldiers. After hearing the story of a brave Russian warrior, Napoleon acted like a king and told him to let go of him.

When the grenadier returned from captivity, the fellow soldiers were unspeakably surprised, they were already mourning the beloved “uncle Korenny”. For the courage shown in the battle of Leipzig and the rescue of officers, Leonty Korennoy was promoted immediately to the ensigns - the highest noncommissioned officer and became the standard-bearer of the regiment. He was also granted a special silver medal around his neck with the inscription "For the love of the Fatherland."

After the Battle of the Nations, the fate of Leonty Koorny was unknown. Maybe after the end of the overseas campaign, he returned to the young wife Praskovya Egorovna (in 1812, she was 24, probably Leonty was not much older than his wife), or we died the death of the brave on the battlefield, we do not know.

However, for a long time in the life guards of the Finnish regiment there was a song composed by fellow soldiers, in memory of the legendary grenadier:

We remember Uncle Native,
He lives in our memory ...

Ctrl Enter
Noticed a mistake Highlight text and press. Ctrl + Enter
We are
"Flight of the Eagle." Like Napoleon with a handful of soldiers and without a single shot captured FranceFeat grenadier Leonty Korenny
29 comments
Information
Dear reader, to leave comments on the publication, you must to register.