How does the secret laser tank of the USSR 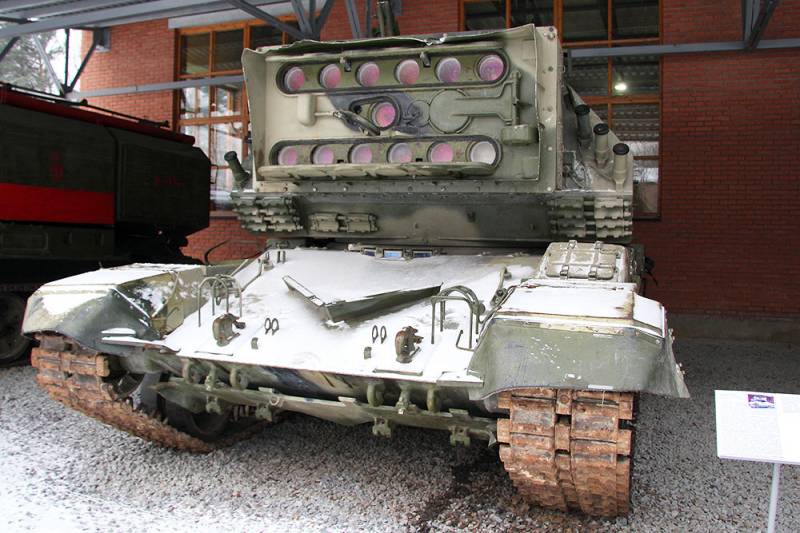 In 1990, the Soviet designers presented a prototype of a self-propelled laser complex (SLK) 1K17 "Compression", which after almost two years of government testing was recommended for use.

The top-secret machine (many of the technologies used in it are still under the heading of secrecy) was designed to counteract the enemy's optical-electronic devices. Its development involved employees of the NGO "Astrophysics" and the Sverdlovsk plant "Uraltransmash." The first ones were responsible for the technical stuffing, the second was faced with the task of adapting the platform of the newest for that time self-propelled guns 2С19 "Msta-S" to the impressive size of the SLK tower.

The "Compression" laser unit is multi-range - it consists of 12 optical channels, each of which has an individual guidance system. Such a design practically negates the opponent’s chances to defend against a laser attack with a filter that can block a beam of a certain frequency. That is, if the radiation was carried out from one or two channels, then the commander of an enemy helicopter or tankusing a light filter, could block the "blinding". It is almost impossible to counteract 12 rays of different wavelengths.

In addition to the "combat" optical lenses located in the upper and lower rows of the module, there are objectives of the aiming systems in the middle. On the right is the probe laser and the receiving channel of the automatic guidance system. Left - day and night riflescopes. And for work in the dark, the installation was equipped with laser illuminators, range finders.

To protect the optics during the march, the frontal part of the SLK tower was closed with armored plates.

According to Popular Mechanics, a rumor was spread about the 30-kilogram of ruby ​​crystal, which was specially grown for use in the Compression laser. In reality, 1K17 used solid-state laser with fluorescent pump lamps. They are quite compact and have proven their reliability, including on foreign installations.

The most probable working body in the Soviet SLK could be an yttrium-aluminum garnet doped with neodymium ions - the so-called YAG laser.

Generation in it occurs with a wavelength of 1064 nm - infrared radiation, in difficult weather conditions less susceptible to scattering compared to visible light.

The YAG laser in pulsed mode can develop impressive power. Due to this, on a nonlinear crystal it is possible to obtain pulses with a wavelength twice, three times, four times shorter than the original one. In this way, multiband radiation is formed.

By the way, the tower of the laser tank was significantly increased compared to the main one for the 2C19 Msta-S SAU. In addition to optoelectronic equipment, powerful generators and an autonomous auxiliary power unit for their power supply are located in the back of it. In the middle of the logging are the jobs of operators.

The rate of fire of the Soviet SLK remains unknown, since there is no information about the time required to charge capacitors that provide pulsed discharge to the lamps.

By the way, along with its main task - disabling electronic optics of the enemy - SLK 1K17 could be used for targeting and marking targets in poor visibility conditions for "its" equipment.

"Compression" was the development of two earlier versions of self-propelled laser complexes, which were developed in the USSR since the 1970-s.

So, in 1982, the first SLC 1K11 Stilette was put into service, the potential targets of which were optical-electronic equipment of tanks, self-propelled artillery installations and low-flying helicopters. After detection, the installation produced a laser sensing of the object, trying to find optical systems using glare lenses. Then SLC hit them with a powerful impulse, blinding or even burning a photocell, a photosensitive matrix or the retina of the aiming fighter's eyes. Laser pointing horizontally was carried out by turning the tower, vertically - using a system of precisely positioned large-size mirrors. The 1K11 system was based on the tracked mine landing gear chassis of the Sverdlovsk Uraltransmash. Only two cars were made - the laser part was being finalized.

A year later, the Sangwin SLC, which differs from its predecessor by a simplified target targeting system, was put into service, which had a positive effect on the weapons. However, more important innovation was the increased mobility of the laser in the vertical plane, since this SLC was designed to destroy optical-electronic systems of air targets. During the test, Sanguin demonstrated the ability to stably determine and hit the optical systems of a helicopter over a distance of more than 10 kilometers. At close distances (up to 8 kilometers), the installation completely destroyed the enemy’s sights, and at the extreme ranges blinded them for tens of minutes.

The complex was installed on the Shilka self-propelled anti-aircraft chassis. A low-power probing laser and a receiving device for the guidance system were also mounted on the tower, fixing the reflections of the probe beam from the glaring object.

By the way, in 1986, the Aquilon shipborne laser complex was created at the time of the Sanguine. He had an advantage over ground SLC in power and rate of fire, since his work was provided by the power system of a warship. Aquilon was designed to disable the optical-electronic systems of the coast guard of the enemy.