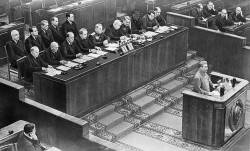 65 years ago, 5 – 14 in October 1952, after the 13-year interruption, which is connected with the Great Patriotic War and the period of restoration, the XIX Congress of the CPSU (b) took place. It was the last congress, in the work of which I.V. Stalin. One of the outcomes of this party forum was the renaming of the All-Union Communist Party (Bolsheviks) into the CPSU. But most importantly, the fundamental directives for the Fifth Five-Year Plan (1951 – 1955) were adopted, which provided for a higher rate of economic development of the country compared to the previous five-year plan (1946 - 1950), whose main goal was to revive the country. The peculiarity of the new five-year plan was the fact that for the first time it was coordinated with the corresponding plans for the development of the economy of Eastern European socialist countries (except Yugoslavia), as well as the PRC.


The directives on the new five-year plan, along with the decision to convene a congress, were published in Pravda on August 20 1952. The head of the USSR State Planning Committee (in 1949 – 1955) Maxim Saburov was appointed Rapporteur. Stalin, being the head of the Union Council of Ministers, was not among the speakers, he spoke only at the last meeting of the congress, October 14, with an 15-minute speech. And he did not say anything about the speeches of the delegates of the congress, including on the reports of G. Malenkov (report of the Central Committee) and M. Saburov.

In his last speech, Stalin spoke exclusively of the main tasks of the international communist and national liberation movement, the need to rally all the anti-imperialist forces in the world.

In this regard, foreign media, in particular, the British, noted that the most likely were two reasons for this behavior of Stalin, and interconnected with each other: either he is seriously ill, or the policy to remove him from his leadership role is increasing.
This version was confirmed, for example, by the fact that Stalin was only at some meetings of the congress, moreover in the stands for members of the Central Committee, and not in the presidium of the forum.

October 12 1952 The XIX Congress approved the Fifth Five-Year Directive. Already by 1955, the total level of total industrial production should have increased by 1950% compared to 70 year, the average annual growth rate of all gross output was determined in 12%. It envisaged the construction (and today the largest in Eurasia) of the Kuibyshev (now Zhigulevskaya), Stalingrad (now Volzhskaya), Kakhovskaya hydro plants, as well as the Kama, Gorky (now Nizhny Novgorod), Mingechaur, Ust-Kamenogorsk and several other hydroelectric stations. (About 80% of these capacities were commissioned to the beginning - middle of 1956). For example, the development of the Volga-Don water transport route (commissioned from June 1952) from the Volga-Ural navigable canal (Stalingrad region - Western Kazakhstan) was planned. By 1956, it was planned to commission the Amu Darya (eastern Turkmenistan) - Caspian Sea (Krasnovodsk port) water route, but in 1955 these and a number of other industrial projects were suspended.

By 1956, it was planned to commission the Polar Transsib: the northern Trans-Siberian railway (over 1300 km) from Salekhard to Norilsk with its subsequent extension (to 1963) to Yakutsk and further to the ports of the Sea of ​​Okhotsk. This road to Norilsk was built to the beginning of 1953-th by almost 70%, but in March of the same year the project was mothballed. However, the economic and geopolitical demand for this artery did not disappear anywhere, and in 2014-m its construction was resumed, although it is carried out with a significant delay from the schedule (mainly due to insufficient funding).

The capacity of the sea and river ports of the country should have more than doubled; in the Siberian-Far Eastern region of the RSFSR, in the Danube region of Ukraine, Azerbaijan, in the Baltic republics and the Kaliningrad region, the creation of new seaports was planned. But it was in the RSFSR that such projects were stopped in 1953 – 1954.

The gross crop of grain crops was planned to increase over the five-year period by 40 – 50%, other crops - at least by 35%. Gross production of meat and fat should have increased by almost half, milk - as much wool and hides in 2 - 2,5 times. Moreover, more than half of all this increase was planned for the RSFSR.

The well-known American economist Vasily Leontyev noted in this connection that “in the Soviet economic plans 1951 – 1955. The emphasis is on making the RSFSR a “locomotive” of economic development for the entire USSR. The Soviet leadership is striving, including for understandable political reasons, to prevent Russia from lagging behind other regions of the country in terms of economic construction. ”

But, as is known, in the subsequent period, the socio-economic development of the RSFSR was, to put it mildly, in the background in comparison with other Union republics ...
It is also characteristic that in 1952 – 1955. It was planned to build up to 2,3 million hectares of soil-protective forest plantations on collective and state farms and almost as many in traditional forest regions of the country in accordance with the state program (1948 – 1964) “Frontier plantings, introduction of grassland crop rotations, construction of ponds and reservoirs to ensure high and sustainable crops in the steppe and forest-steppe regions of the European part of the USSR ". At the same time, up to 70% of the volume of all these activities was planned in the RSFSR. Already in 1948 – 1952. their implementation has led to a significant increase in crop yields, livestock productivity, an increase in the fertility of agricultural soils and a reduction in the area of ​​degraded (sick) agricultural land. But in July-September 1953 and this program was stopped. The development of virgin lands became a priority, on the eve of and during which even experienced plantations and ponds of agro / forest research facilities were cut down in virgin and adjacent regions.

Improvement of living conditions was envisaged at the expense of state and cooperative (housing cooperatives) construction of 105 million square meters. m housing. This is almost twice the total index of the third and fourth five-year plans, since the direst consequences of the war to the beginning of the 1950's led to overcrowding in large cities and industrial centers in most regions of the country. Moreover, all kinds of barracks, decommissioned passenger and post-luggage cars, and dugouts of the war years were forced to use as housing.

But the pace of housing construction in 1946 – 1951. each year they lagged behind 20 – 25% from the real needs, and for 1951 – 1955, it was planned to reduce this disparity to 10%. However, after 1953, the country's leadership decided to reach records not only on virgin soil. In 1954 – 1955 decisions were made to speed up and simplify housing construction by eliminating the so-called architectural excesses (the so-called Stalin Empire), the use of cheap building materials and minimizing the finishing works in new buildings.

As a result, by the beginning of 1957, the corresponding figure of the fifth five-year plan was exceeded by more than a third. But these were mostly standard houses of average height from materials harmful to health: such houses were not only their tenants, but also experts, who reasonably called asbestos-phenolic ones. This housing is still a significant part of the housing stock of many cities and industrial centers not only in Russia, although the regulatory life of such houses does not exceed 25 years. But perhaps more characteristic is the fact that this kind of housing was built mainly in the RSFSR, Belarus and Eastern Ukraine.

In the directives for the fifth five-year plan it was planned to continue to hold in the spring an annual decline in retail prices. But 1 April 1955, it did not take place and, as they say, has sunk into oblivion.
Recall that the annual decline in retail prices for goods and services was initiated by Stalin at the end of November 1947 of the year (by the decision of the Presidium of the Union Council of Ministers). Decline in prices occurred, in particular, 16 December 1947 th, 10 April 1948 th, 1 March 1949 th, 1 March 1950 th, 1 March 1951 th, 1 April 1952 th, 1 April 1953 th April 1 th - the last time. As some Western media noted, the termination of this process was due to the fact that the economic situation in the country was worsening due to huge virgin costs, increased military spending and increasing USSR financial assistance to postcolonial countries.

The latter is illustrated by the fact that the mentioned help is only for 1954 – 1957. more than tripled, and these were mainly foreign currency interest-free loans / loans. But the postcolonial countries paid to the USSR (in goods and in currency) no more than 40% of the credit and borrowed funds provided to them in 1954 – 1964.

However, after Stalin’s death in March 1953, the planned targets for most sectors of the economy, unlike agriculture, were sharply reduced due to N. Khrushchev’s notorious campaign to develop virgin and fallow lands launched in the spring of 1954. The Union Council of Ministers has prescribed grain production to almost double by 1956 in comparison with the level of the 1951 of the year. Rapidly rising virgin spending required the conservation or cancellation of at least half of the industrial, energy and infrastructure projects of the five-year plan.

This decision was made at the end of March 1953 and, naturally, disrupted the coordination of plans for the economic development of the USSR and the socialist countries (it resumed — with the participation of most Eastern European CMEA countries — only from the middle of 1960's). As for the most virgin campaign, carried out mainly in Kazakhstan, its technologically and ecologically detrimental methods could not but lead to a chronic crisis, which is still felt today, in most segments of agriculture and animal husbandry in the Russian Non-Black Earth region and in a number of other regions of the country. At that time, personnel, agricultural equipment, seed stocks and even some narrow-gauge railways were urgently transferred to virgin lands. And in investments in agriculture, the virgin share in 1954 – 1958. exceeded 65%.

In the first virgin years - 1954 – 1956. grain yields in the USSR were almost twice as high as 1951, up to 75% of this growth was provided by virgin lands. However, already with 1958, the USSR became incrementally - right up to the collapse of the country! - first import livestock products, and then grain products ...

So, many of the tasks of the fifth five-year plan were revised two years after the start of their implementation. The second stage of the large-scale industrialization of the country was delayed for many years in favor of the notorious Khrushchev "innovations", especially in agriculture.
After a short time, they turned, above all, for the RSFSR, with irreparable consequences — sectoral and, in general, socio-economic.

Meanwhile, in the autumn, in the West, the upcoming changes in the country's leadership were caught in time. And when, after the congress at the next Plenum of the Central Committee of the CPSU, Stalin was not officially released from the post of general secretary (which he himself proposed), but was not elected to this post, the Anti-Bolshevik Coordination Center was established in Munich under the auspices of the United States CIA and Intelligence Agency (BND). He became the governing structure of the American Committee for the Liberation of Russia, created in January of 1951 ... The USSR and the West entered a new era of relations.

Ctrl Enter
Noticed oshЫbku Highlight text and press. Ctrl + Enter
We are
Myths of the Great Patriotic. Did Stalin have prostration in the first days of the war?Red commanders on the Alley of Mig
Military Reviewin Yandex News
Military Reviewin Google News
30 comments
Information
Dear reader, to leave comments on the publication, you must to register.