The combat work of Alexander Karpov 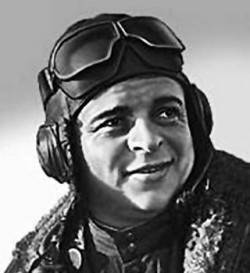 The military activities of our best fighter pilots of the Great Patriotic War, or, as they often called it, “combat work,” sometimes went beyond human capabilities, moving into that particular area of ​​psychophysical activity that undoubtedly met the criteria of high art ...


To master the art of a fighter pilot meant to cultivate a special intuition that allowed you to walk unscathed between dozens of deadly tracks, bypassing many deadly gaps, to be in the right place at the right time and instantly hit the enemy. Combat work was not only dangerous, but it required extreme mental and physical strength.

The fate of Aleksandr Terentevich Karpov, the most effective pilot of the country's air defense forces, the only double Hero among them, is a vivid example of serving the duty.

He was born into a family of Russian peasants near Kaluga, in the village of Felenevo, on October 17, 1917. He graduated from an incomplete secondary school, factory school, worked in the tool shop of the Kaluga Engineering Plant. In school, he studied in the circle of the House-Museum to them. K. Tsiolkovsky, his dream came true later, and he was admitted to the Kaluga flying club. And in 1939, the reserve pilot A. Karpov was enrolled in the famous Kachin military aviation school of pilots. In 1940, junior lieutenant Karpov was sent to serve in one of the aviation units deployed in Ukraine. His flying handwriting attracted the command, and among several pilots he was aimed at the development of the first fighter of the new generation I-26, later known as the Yak-1.

Karpov performed his first combat sorties near Moscow at the end of July, 1941, in a pair with his friend Lieutenant Iriney Belyaev. At the end of August the 1941 regiment was transferred to the Leningrad direction. Here A.T. Karpov scored his first victory in a pair over Tosno, knocking down Me-109F, recorded, which then often happened as Me-115. In October, 1941 was transferred to the 123 th Fighter Aviation Regiment of the 7 Air Defense Corps, which covered Leningrad. From departure to departure, the flying and mastery of the Belyaev-Karpov pair grew stronger.

A prominent leader, Karpov, having already become a Hero, often flew out as a slave from Belyaev. Captain I.F. Belyaev, who destroyed 11 personally and in the 6 group of enemy aircraft, was shot down in an 8 air battle on July 1943, and was awarded the title Hero by one of the last stories a great state posthumously - 5 May 1991 th ...

Rather, they were not a pair in the usual sense of “sword and shield”, but a more highly organized military unit, where the attacker was instantly determined from the point of view of combat expediency. The integrity of the pair was so organic that these pilots, who won more than 50 victories in the air, and suffered defeats together - in the autumn of 1942, when their pair was knocked down, and in July 1943, when Iriney Belyaev died, and Alexander Karpov jumped out of the unmanaged car parachute ...

“The death of Irenaeus,” A. Karpov recalled, “pierced my heart with such pain that the first seconds after what happened, I didn’t see anything around me and almost was shot down. I woke up only when I heard how bullets were drummed on my plane, and the familiar silhouette of the Messer flashed alongside. At that moment, such a rage boiled inside me that, without looking around properly, I rushed after the flashed plane. And only some time later, he noticed that he was left alone against the three fascists, who decided to do away with me. What happened next is difficult to tell. It was some kind of hurricane fight.

In this battle, I shot down two fascist vultures and, among them, the one from whose fire Irenaeus was killed. Left alone with the third fascist aircraft, I suddenly found out that my ammunition load had been completely consumed, and decided to go on a ram.

Taking advantage of the mistake of the German pilot, made by him when taking the plane out of a dive, he developed a top speed and went to the Messer at the tail ... Well, I think now I’ll get you and the tail of the screw. I just thought, when suddenly my plane dropped sharply, then fell to the side, and it began to fall randomly. I barely realized that the anti-aircraft projectile at the fighter repulsed the tail ... As a result of incredible efforts, although very close to the ground, I still managed to get out of the cockpit and with the help of a parachute to land safely. Fortunately, it was again its own territory ... "

The loss of I. Belyaev made Karpov even more selfless and persistent in the air: at the end of July 1943 in five consecutive sorties he shot down 7 of enemy aircraft.

By August, the 1943-th squadron commander of the 27-th Guards Fighter Aviation Regiment (2-th Guards Fighter Aviation Corps, Air Defense Forces of the country) guard Captain A.T. Karpov made 370 combat missions, in 87 air battles he personally shot down 16 enemy planes and 7 in the group. 28 September 1943 for courage and military prowess shown in fights with enemies, he was awarded the title Hero of the Soviet Union. By June, 1944 made 421 combat sorties, 25 of which made reconnaissance missions of the enemy troops and 19 sorties for attack, conducted 94 air battles, in which 26 aircraft of the enemy personally shot down and 7 in the group.

30 June 1943 A.T. Karpov shot down Me-109, which was decided to be considered the thousandth Hitlerite aircraft shot down on the Yaks near Leningrad. The Chief Designer, Deputy Commissar of the Aviation Industry, then Major General of the Aviation Engineering Service, congratulated him on this victory. Yakovlev.

On July 2, the 1944, by order of the Supreme Command, No. 173, the 27 guards air defense regiment was given the honorary title Vyborg. 22 August 1944 of the year to guard captain A.T. Karpov was again awarded the title Hero of the Soviet Union.

In total, during the Great Patriotic War, the squadron commander A.T. Karpov made 456 combat missions on the Yak-1, Yak-7B and Yak-9, conducted 97 air battles, personally shot down 29 enemy planes and 9 destroyed in the group. In the battles he was wounded.

October 20 1944 about the 18.00 guard Captain Karpov when making a flight on the Yak-9 fighter, paired with junior lieutenant A.F. Suzdaliev, in conditions of limited visibility, collided with water not far from Kronstadt airfield Bull River Pole ... The reasons for the disaster remained unknown, this flight was the third flight that day for the pilot ...

He was remembered by people as an exceptionally modest and silent person who does not tolerate falsehood and panache.

These traits are common to most heroes in general, as noted by Plutarch.

Forever enrolled in the lists of the military unit. A bronze bust of the Hero is installed in Kaluga, a street and a square are named after him, as well as the Kaluga Transport and Technical College. The name of the Hero is given to Vysotsk Secondary School (Duminichsky District of Kaluga Region) and a secondary school in the village of Levashovo. The street in the village Ferzikovo is named after him. In Kaluga, memorial plaques were installed on the school building where he studied, and on the factory building where he worked.

Ctrl Enter
Noticed oshЫbku Highlight text and press. Ctrl + Enter
We are
352 shot down as a way to defeatTurntables, Afghanistan. "Eight"
2 comments
Information
Dear reader, to leave comments on the publication, you must to register.