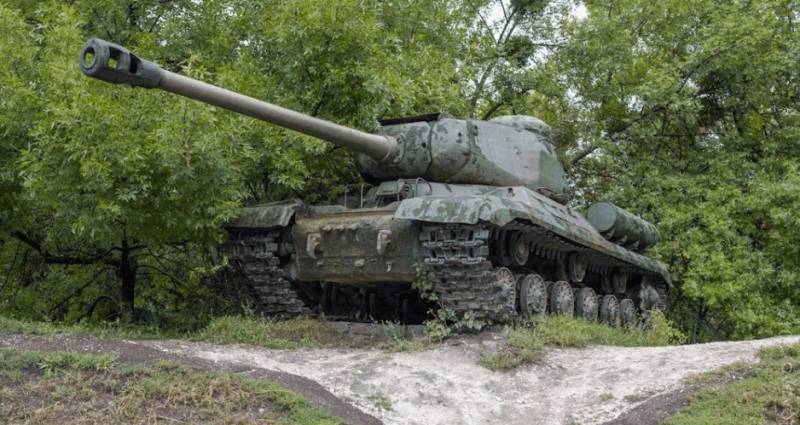 We were frankly jealous

Mikhail Reznikov, for example, appreciated the possibilities to stay alive with the crews of the T-34 and the EC-2.

At the beginning of the war he fought on the KV-1, and at the end of the 1943 of the year, after staying in the reserve regiment, became the commander of the gun on the EC-2.

Here are the conclusions he came to: “From the personnel of the end of 1943, from crews tanks Approximately 25% of tankers reached Victory. This is a high percentage. Those who fought on the T-34 died much more often than us .. We were openly envious of us. Our 120mm frontal armor, our 122mm cannon. Our tanks were more tenacious, and in the "thirty-four" a couple of times went into battle and was ready - "fell the death of the brave." They called us “black skins,” because we wore black leatherette jackets. The Germans often retreated from the battlefield, seeing IS-2. If they didn’t have heavy tanks or just self-propelled guns, or direct-fire anti-aircraft guns on the defensive, the Germans preferred to step back. They recognized us from afar, unmistakably different from the T-34, by the long "knob" at the end of the barrel - the muzzle brake. So the tankers who fought on the T-34, thought of reinforcing on the trunks of their tank guns an ordinary bucket, which from afar could be mistaken for the "knob" of the IS-2. Seeing the approaching T-34 with this “invention” on the barrel, the Germans often left their positions and retreated. But there was no enmity between us. Both we and they burned in tanks and perished for our Motherland. ”

Opportunities to make observations and conclusions about the tank survival chances of Mikhail Reznikov were: “I was lucky in some way: all the time I fought in the 57 Guards Regiment of the 3 Tank Army, having survived three redevelopments after the losses incurred by the regiment. In the 3 th TA under the command of General Rybalko, our regiment was for a long time the only unit equipped with EC-2 tanks, so we were always at the forefront where the critical situation was created. The regiment began the military way, freeing Right-Bank Ukraine, then fighting for Lviv, Przemysl, Yaroslav, forcing the Vistula and fighting near Sandomir, taking control of the Oppeln fortress, bloody battles in Silesia and on the bridgeheads on the Oder, fighting near Breslau, breaking through the Neisse river, taking Berlin and the liberation of Prague is the glorious battle of the 57 Guards Poltava Red Banner Order of Bogdan Khmelnitsky and Suvorov heavy tank regiment. "

Not everyone had so long to fight in the same regiment. Time for the accumulation of information and understanding it was quite enough.

How exactly did Reznikov explain that those who fought on T-34 died much more often than those who went into battle on EC-2? First of all, of course, with the technical data of "Joseph Stalin":

But it was not only the technical capabilities of the EC-2, but also the peculiarities of their use: “Heavy tank regiments took care. We were extremely rarely thrown into the attack in front of us all. Usually T-34 marched forward, revealing the enemy firing points, such a kind of reconnaissance in force. The Germans opened fire, then we appeared, as they say, “our way out,” and with their guns and might they provided a breakthrough. ”

It is difficult to doubt that the more powerful EC-2 was taking care of more than the T-34. But the survival of his crew, Reznikov was largely considered the merit of the driver: “My best front-line friend was our tank driver Nikolai Popov. In the same carriage we went with him all our way in the war. Nikolai carefully watched the war machine, was downright in love with her. In moments of calm, when everyone was resting or “giving in,” he cleaned and repaired all the mechanisms. Our tank was always on the move. In battle, he skillfully maneuvered, many times he saved the crew from harm. Nikolai was awarded five military orders ... Largely thanks to Kolya, his courage and ability, our crew survived to Victory. " And to live to Victory was not easy.

Germans would burn us all to the last

According to Reznikov, the difference in losses between the EC-2 and T-34 disappeared by the end of the war: “At the end of the war, our EC-2 Germans began to incite in the same quantities as the T-34. In 44, the Germans began to use a new cumulative projectile, which burned through the armor of a tank, like a drill. After such a hit from the crew, even the belt was left. ”

Here is what he writes, for example, about the storming of Berlin: “In the Berlin battles, our regiment was ramming, punching defenses, we forced the Spree, and then we ran out of shells and fuels and lubricants. 27 on April 45 of the year, the regiment's tanks occupied all-round defense, sitting in a large clearing in a Berlin park, and did not take part in the battles for the city. If we were moved further to the center of the city, most likely, the Germans would have burned us one and all ... ".

Of course, excerpts from the memories given above - this is the opinion of only one veteran - tankman. Of course, any memories - the source is very subjective and the assessment - “those who fought on the T-34 died much more often than us” was made according to personal observations, which is called “by eye”. But it looks quite logical. The thickness of the armor of the EC-2 and the characteristics of the use of heavy tanks could well have made them less vulnerable than the Thirty Fours. And the alignment of losses by the end of the war can be explained not only by the appearance of a new cumulative projectile among the Germans. In the last months of the war, tankers in battles on the territory of Germany more often than before had to take part in street battles that were extremely inconvenient for them. Here and the loss of EC-2 from the actions of German faunters inevitably increased.

It is curious how the point of view of Mikhail Reznikov regarding the comparison of losses of EC-2 and T-34 is common among veterans of the tank crew?

Ctrl Enter
Noticed oshЫbku Highlight text and press. Ctrl + Enter
We are
Once again about tanks, Soviet and GermanThe best main battle tanks of the world 2012 of the year
Military Reviewin Yandex News
Military Reviewin Google News
161 comment
Information
Dear reader, to leave comments on the publication, you must to register.