The Chinese army will become the strongest in the world

October 21 2017
21
At the congress of the Communist Party of China, international issues do not occupy a large place, but already on the first day, Xi Jinping’s report made two important statements: about world hegemony and the Chinese army. One of them can even be called sensational, if you follow not the letter, but the spirit of what has been said. And it directly concerns the fact that in a few years it will be the Chinese army. 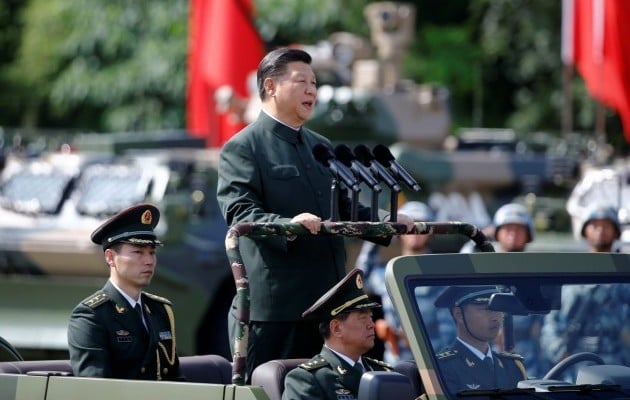 The report of the General Secretary of the Central Committee at the XIX Party Congress lasted three and a half hours - and the key figures in it were 2035 and 2050. These years are stages on the way to the "great rebirth of the Chinese nation."

The first date is the time for the completion of socialist modernization, and the second is the time for turning China "into a rich, powerful, democratic, harmonious, civilized, modernized socialist state." That is, by the centenary of the proclamation of the People’s Republic of China, the Chinese dream must come true and the country must “become great again”, in the words of Trump.

At the same time, China’s ambitions are not only real, but also completely natural - most of their stories China was the biggest power of the world in every sense. It is only in our Eurocentric view that seems surprising. But an objective analysis suggests that over 4 thousands of years of its history (this is a proven minimum), China has experienced many neighboring and distant civilizations, including those who claimed to be on a global scale, and retained their independence and self-sufficiency.

Not only its population, but also the economy were the largest in the world, even two centuries ago making up a third of the global volume. Just in the XVIII century, the country started having problems, aggravated by the fact that in the XIX century it was forcibly opened the world. The West, which came to the coast of China fully armed, took advantage of internal crises, aggravated and provoked them, put the Chinese on opium and eventually made the great country their semi-colony.

Over the past 40 years, China has made a huge leap - but, on the other hand, it just returned to its rightful place in the world. I restored the lost, becoming before our eyes the main power of the world. It already has the largest economy in the world and the highest growth rates in the world, the world's largest population and the most ambitious plans. In a good way, ambitious. China does not claim to world dominance, the fact to replace America as a global hegemon. More precisely, it will inevitably replace - and is already replacing it as the strongest - but all the time emphasizes that it will not become the new global hegemon.

So at the XIX Congress, Xi Jinping said that China would never pursue an expansion policy and would not sacrifice the interests of other countries for its own benefit:

"Whatever level of development China has attained, it will never claim to be a hegemon."

Well, of course, they say kitafeboby, this is all a lulling Chinese melody. And as soon as they become the strongest in everything, they will immediately turn into new Americans, dictate their conditions, seize territories and impose their customs.

It is clear that Russia, which has a wealth of experience in relations with Europe and the West as a whole, is used to measuring everything in the Western manner, but the Chinese geopolitical strategy is just as different from the Western one as the Chinese civilization is from the European one. The Chinese do not impose their values ​​on anyone. Including because they consider all nations different and, to put it mildly, inferior to the Chinese in development, they do not seek to control the whole world through military force, diplomacy and covert operations.

The Chinese seek to gain control over trade and various businesses in foreign countries, but it all depends on the strength of the rival partner, and not on the strength of Beijing’s pressure. Russia, for example, has nothing to fear of any form of "Chinese expansion," if we in each joint business with the Chinese clearly and intelligently defend our national interests. Our countries do not have unrecoverable contradictions - and there are many truly mutually beneficial and strategically important common affairs.

The fact that the rise of China is objective and inevitable is already understood by the Anglo-Saxons for a long time, but they have a completely different relationship with the Middle Kingdom. And the problem here is not in the Chinese. For almost 40 years, competent American analysts have been talking about the inevitability of the American-Chinese clash in the struggle for global dominance - and this is only partly true.

Yes, China is challenging America - but only because it does not just lay claim to world hegemony, but also tries to act as if we live in an “American-style world.” The US has been holding back China since the proclamation of the PRC, and although in the post-war period they were much more engaged in confrontation with the USSR, already at the end of 1980, after reconciliation with Moscow, the “Chinese question” again became the key issue for the USA.

A mere glance at a map to understand how the United States in a military sense, literally besieged China. Especially in the east and southeast direction, from Japan and Korea to the South China Sea. In a great country, whose economy also depends on the import of energy resources and the export of goods, such a “blockade” naturally causes nothing but irritation. And the desire to break the shackles - which, undoubtedly, will be done. And in an informal alliance with Russia, which, as well as China, is interested in changing the existing world order.

But if Russia traditionally holds an active foreign policy, China has also traditionally been publicly adheres extremely cautious tactics. This is due to a number of reasons. Now we can single out the one that China does not want to reveal its plans until the moment when it will be useless to hide them. Such tactics are quite arbitrary - after all, Atlantic geopolitics see what is happening in reality.

And it is not only an active Russian-Chinese rapprochement, but also a major program of modernization of the Chinese army. Xi Jinping also spoke about it at the congress.

“We have reached a new historical key point in strengthening national defense and the armed forces ... We must fully implement the party’s ideas on strengthening the army to enter the new era and adapt the military strategy to the new conditions. Build a strong and modern army, navy, air force, ground forces, as well as strategic support forces ...

We'll do it our mission to 2035 year to modernize our national defense and the armed forces has been basically completed. And by the middle of this century, it is necessary to turn the People’s Army of China into armed forces of the advanced world level. ”

These words have already caused a bit of a stir - the fact is that some media have translated the "advanced world level" as "the strongest in the world." If Xi really said that by 2050, the Chinese army would be the strongest in the world, it would be a sensation. Not because it is surprising or outrageous, but because the Chinese never say anything that could be used to accuse them of their claims to world domination. They do not want him - but who doubts that the United States would immediately have seized upon such a statement and would have declared it a threat to American and international interests.

At the same time, the United States not only constantly emphasizes that they have the strongest army in the world (which corresponds to reality since 1991), but they constantly state that they will not allow anyone to become stronger than them. Well, in general, what is allowed to Jupiter ... Naturally, neither China nor Russia disagree with this - but Russia does not need to arrange an arms race with the United States. We have nuclear weapon, ground forces are being modernized, updated aviation and the fleet - for now, that's enough for us. But China, which needs to print its own borders, straighten its shoulders at least in the zone of its own national interests, simply cannot do this without squeezing the United States out of it. Therefore, accelerated military construction is for Beijing the only possible option to achieve the "Chinese dream".

So Xi Jinping, speaking of the achievement of the “advanced world level” by the Chinese army in 2050, really meant that it would become the strongest in the world. And there is no doubt that it will. The strength of the Chinese economy, the funds allocated to the army (and the official military budget shows only a fraction of the costs), and, most importantly, the weapons issue program for the coming decades leaves no doubt about it. By 2050, China will have the world's largest fleet (including more than a dozen aircraft carriers) and the largest air force in the world. This is what is needed to extrude the United States from the Pacific. At the same time, the United States itself all these years will gradually lose ground not only in this region (which, by the way, becomes the most important), but also in the world as a whole. So it is likely that the case of the Sino-American war will not come.

Well, what about the option of provoking a “war ahead of time” that Great Britain applied to Germany in 1914 (in London it was understood that the German construction program fleet will inevitably lead to the empire losing control of the oceans), the United States will not work for China.

Only the internal crisis and the new unrest in China can prevent the Chinese army from taking the first position in the world. But the CCP is doing everything to prevent this from happening. Including carefully studying the Soviet experience: from the October Revolution to the collapse of the USSR. And the construction of the Soviet Red Army - the most powerful army in the world in the second half of the XX century.

Ctrl Enter
Noticed a mistake Highlight text and press. Ctrl + Enter
We are
About Stalin and KhrushchevWhat you didn't want to know about England
21 comment
Information
Dear reader, to leave comments on the publication, you must to register.