Poroshenko and Avakov scandal over the tents at the Rada

October 20 2017
32
President of Ukraine Petro Poroshenko squabbled with Interior Minister Arsen Avakov because the protesters were able to set up tents at the parliament, writes "Ukrainian Truth " with reference to the sources.


President of Ukraine Petro Poroshenko gathered in his administration on Bankovaya Street in Kiev police heads and Interior Minister Arsen Avakov. The reason was the so-called Mikhomaydan, the initiator of which was the former governor of the Odessa region, Mikhail Saakashvili. 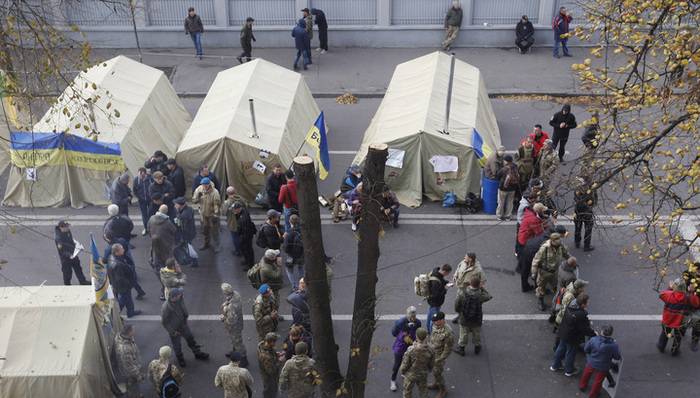 The publication notes that Poroshenko was extremely annoyed and blamed Avakov for everything. In his defense, the head of the Ministry of Internal Affairs of Ukraine replied that he had a choice: to allow a bloody fight or to allow tents to be set up. In the end, he chose the latter. According to the publication, 19 October in the evening Avakov was again at Poroshenko on Bankova, however, the results of the meeting are not reported.

The protest in the center of Kiev began on October 17. Protesters launched a tent city near the building of the Verkhovna Rada of Ukraine. At the same time, local police have already demanded that the participants of the “Mikhomaydan” move their tents to the territory of the nearby Mariinsky park.

Ctrl Enter
Noticed a mistake Highlight text and press. Ctrl + Enter
We are
Misha "vanguet" about the reasons for the further disintegration of UkraineMinister of the Leaky Network: Avakov's Facebook Hacked
32 comments
Ad