Sobchak against all or all against Sobchak

October 21 2017
48
Ksenia Sobchak September 18 announced its intention to participate in the presidential elections in Russia. About her nomination Xenia said in a letter published on the website of the newspaper Vedomosti. There is a video on her official website explaining why she decided to nominate herself. Sobchak is positioning himself as a candidate "against all." 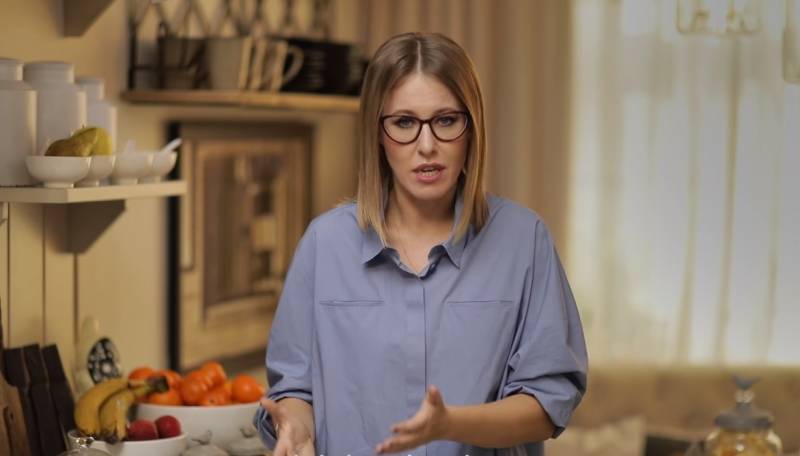 If a person sees Ksenia Sobchak for the first time in his life on this video, then, most likely, he will think of her as a diligent hostess, homemaker, who is very worried about the fate of the country. Ksenia is a journalist, so she knows how to submit the material correctly. This video is pleasant to watch, warm tones predominate on it, filmed in the kitchen, which Russians associate with the heart of the house, she speaks smoothly, with pauses, a pleasant tone of voice. However, it did not help her. Ksenia is known even far beyond the borders of Russia, thanks to her turbulent past, and the Russians are very familiar with her activities.

The video was also published on her page on the Instagram social network, where she has more than five million subscribers. During the day, this video was watched by more than one million and was commented by over eight thousand people. Most commentators suggest that if she wins, the country will become similar to the show “House-2”, of which Ksenia has long been a TV host. Her past negative statements and actions are remembered, in general, she is considered not as a serious politician, but as a representative of show business. However, it is worth noting that, despite the numerous opponents of Xenia’s initiative, there are those who support it. These are mainly women of the age category, the same as in Xenia.

This news caused a stir not only among ordinary citizens, but also among political scientists, sociologists and celebrities. The Russian Public Opinion Research Center reported that during a survey in 2015, 95% of respondents said they had heard about Ksenia Sobchak, of which 60% had a negative attitude towards her. Political analysts predict her election no more than 7% of the vote. And representatives of show business jokingly declare that in this case they will also run, offering to make Buzov the prime minister, Shnurov the foreign minister, and Mavrodi the finance minister.

On popular pages of social networks polls are conducted: would you vote for Xenia in the elections? 90% of voters chose the option "no." Also, many are puzzled by the slogan of her “candidate - against all” election campaign. He is called absurd, because if she calls to vote against all, it means against herself. Xenia has a long time to explain to voters the essence of her position. Recall, before the presidential elections, 5 is still months.

In her letter and in the video, Ksenia briefly described her goals in the pre-election race and, if possible, in the presidency. Sobchak will talk more about his plans at the October 24 press conference.

Ctrl Enter
Noticed a mistake Highlight text and press. Ctrl + Enter
We are
About Stalin and KhrushchevWhat you didn't want to know about England
48 comments
Information
Dear reader, to leave comments on the publication, you must to register.