October 20 2017
2
The US Department of State acknowledged for the first time that Hayat Tahrir ash-Sham terrorists associated with Dzhebhat an-Nusroy * use chemical weapon in Syria, said the official representative of the Ministry of Defense Igor Konashenkov.

Such a statement the State Department made on its website in the message, which explains why Americans should not come to Syria.

This is the first official recognition by the State Department of not simply the availability, namely, I emphasize, the use by terrorists of "Dzhebhat an-Nusra" * "chemical weapons" in this part of Syria to carry out terrorist acts, which we have repeatedly warned and declared at all levels
- noted Konashenkov. 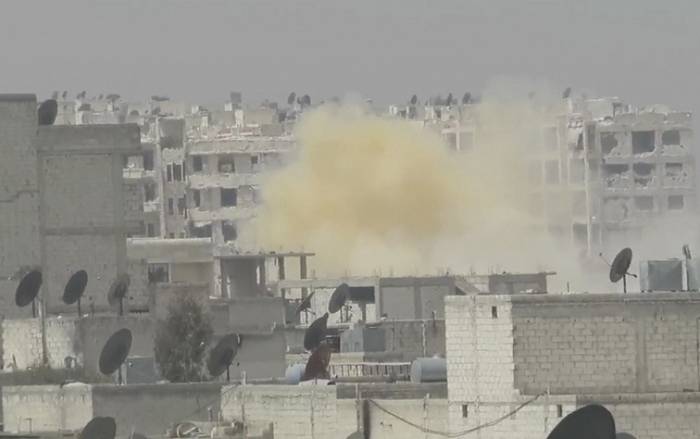 Konashenkov reminded that now in the province of Idlib only one case of the use of chemical weapons is known - in Khan-Sheikhoun.

However, the United States stubbornly accused him of government forces. And the militants who organized the terrorist attack, as the US State Department figured out, from Dzhebhat-en-Nusry *, they called the "moderate opposition"
- he added.

The representative of the Defense Ministry stressed that now "everything fell into place": in Idlib there is an al-Qaeda * group called Dzhebhat-en-Nusra *, which "uses chemical weapons against civilians".

It is not clear just why Washington needed a loud attack with expensive Tomahawk cruise missiles at the Syrah Shirath airbase. After all, it was possible to burn tens of millions of dollars and with benefit for business - by striking at the terrorists "Dzhebhat-en-Nusra" *
- added Konashenkov.

He also commented on the State Department’s statement about the “bombing” of the Russian aviation Idlib city.

Russian planes, unlike the US and the coalition that wiped out Raqqa from the face of the earth, do not strike at populated areas.
Here the State Department, to put it mildly, is mistaken, and American citizens have nothing to fear.
- he concluded.

In August, official Damascus reported that chemical weapons, which were produced by American and British companies, were found in the warehouses left by the militants. At the same time, the Syrian authorities repeatedly stressed that they had never used toxic substances against civilians and terrorists, and the entire chemical arsenal was removed from the country under the control of the OPCW, reports RIA News

Ctrl Enter
Noticed a mistake Highlight text and press. Ctrl + Enter
We are
2 comments
Information
Dear reader, to leave comments on the publication, you must to register.