October 20 2017
14
The CAA, with the support of the Allies, took control of the Conoco field in Deir ez-Zor, the 30 terrorists surrendered to the CAA and left Aleppo, reports FAN with reference to Syrian sources. 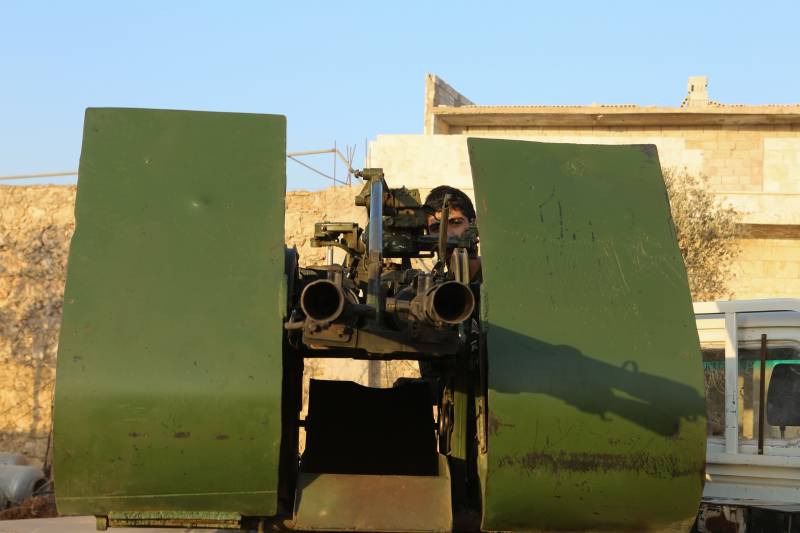 The Syrian Arab Army (CAA) continued its attack on the positions of radical groups in Eastern Ghouta Damascus. In the morning, government forces attacked the Failak ar-Rahman fortifications in the Dzhobar district. A new attack by government forces was repelled by the militants. Earlier, the Syrian army took several strategic positions in the area.

In the northeast of the province of Aleppo 30, the militants "Dzhebhat al-Nusra" (grouping prohibited in the Russian Federation) laid down weapon and surrendered to the government army. Negotiations with the militants were mediated by the Russian Center for Reconciliation of the warring parties in Syria. The Russian Space Forces conducted a series of targeted attacks on the fortifications of the Islamists in the height of Al-Hass in the south of Aleppo province.

In the southeast of the province of Homs continued clashes between the CAA and the group of the IG (banned in the Russian Federation) in the vicinity of the city of Al-Qaryatane. Government forces, with the support of the Russian Aerospace Forces, freed from terrorists the Al-Marmal region and a number of heights to the north of the strategic settlement. Also, the Syrian Arab Army (CAA) conducted shelling of the positions of militants of radical groups in the area of ​​the settlement of Al-Farhania.

Yesterday afternoon, it became known that the Syrian army, with the assistance of allies, took control of the Conoco field in Deir ez-Zor. As a result of the recent clashes between the IG and the SAR army, 13 radicals were destroyed, and 20 Islamists were injured. In the area of ​​the settlement of Abu Hashab, east of the city of Deir ez-Zor, there were fights between the Syrian Democratic Forces (SDF) and ISIS terrorists. The radicals retreated, leaving weapons and ammunition at the disposal of the Kurdish militia fighters.

The troops of the Syrian Free Army (SSA) took control of the Al-Bakar checkpoint and the Wadsham school on the outskirts of the settlement of Tasil in the western part of Dar'a province. At the end of the day, terrorists attacked the positions of the SSA in the area of ​​the previously occupied Al-Bakar settlement. As a result of the igilovtsev attack, 12 militants of the “free army” were destroyed.

Turkey continued to increase its military presence in the Syrian province of Idlib. In addition, the Turkish Armed Forces are building fortifications along the border with Syria. The construction of fortifications is carried out on an elevation height of 455 meters. In the meantime, the Russian Aerospace Forces and the Syrian Air Force continued to strike the radical dislocation zones in the south and east of the province.

The Syrian air force launched a series of strikes against fortified militants in the vicinity of the settlement of Al-Khurzania and Qasr ibn Vardan in the north of the province of Hama. In addition, the CAA conducted artillery shelling of the positions of the militants of "al-Nusra" in the area of ​​settlements of Harb Nafs and Al-Latamin.

In the province of Hasaka in the area of ​​the city of Marcada, clashes between Syrian Democratic Forces (SDF) and ISIS terrorists were recorded. A water station and a police checkpoint have passed under the control of Kurdish. Earlier, as a result of fierce fighting with the radicals, the fighters of the “democratic army” managed to stop the IG’s attempt to break through to Deir ez-Zor.

Ctrl Enter
Noticed a mistake Highlight text and press. Ctrl + Enter
We are
Situation in SyriaThe situation in Syria on Google Earth satellite images
14 comments
Information
Dear reader, to leave comments on the publication, you must to register.