Saakashvili: We will discuss the plan of victory over the oligarch Poroshenko

October 20 2017
41
Without foreign "buns" Maidan in Ukraine is clearly not wondered. If at first, the representatives of the radical groups that came to the rally declared their readiness to carry out an indefinite protest - “until all the necessary reforms were carried out”, it now turned out that the protest did not last for days at the parliament.


The so-called activists said that they are winding up the tent camp and leaving the building of the Verkhovna Rada of Ukraine. The game of democracy is over.

From the message of the leaders of the protest action in Kiev:
At this stage, we are stopping the street action “Big Political Reform” until the next session.

At the same time, supporters of the new party of Mikhail Saakashvili said that they intend to remain under the walls of the building of the Ukrainian parliament. However, most of the protesters still dispersed to their homes, saying that "the action will be carried out by other methods." What specific methods are we talking about, the ex-protesters did not report. 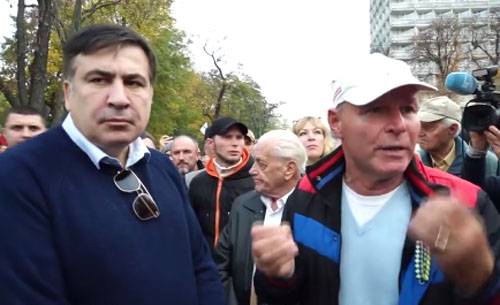 Only the ex-governor of the Odessa region does not calm down. On Facebook, he posted an “appeal” to the citizens of Ukraine to come to a new “veche”. Saakashvili is organizing it on October 22 Sunday.

Saakashvili:
Let's discuss the plan of victory for the oligarch: Ukraine after Poroshenko.

Saakashvili’s supporters say they now intend to call on Ukraine’s national police to side with them.