October 24 2017
60
Evpaty Kolovrat - the epic Russian bogatyr, the Ryazan boyar or voivod, the hero of folk tales from the time of the Batu invasion of Russia. The Old Russian “The Tale of the Ruin of Ryazan Batu” tells about his feat. This story is preserved in the lists, the oldest of which date from the end of the XVI century. At the same time, three types of this text were reflected in the three oldest lists according to the classification of academician Dmitry Likhachev.


Despite the remoteness of events concerning this person, Evpaty Kolowrat is a famous figure, who was widely represented in Russian literature, mainly in poems, poems and ballads. In the Soviet Union, in 1985, the cartoon “The Tale of Evpatiy Kolovrat”, directed by Roman Davydov, was shot about this Russian hero, comprising a cycle dedicated to ancient and medieval stories Russia, it also included the cartoons “The Childhood of Ratibor” (1973 year, about the formation of the Russian statehood) and “The Swans of Nepryadva” (1980 year, about the Kulikovo battle). Also, several slides were devoted to this hero in the USSR at once. 30 November 2017 of the year on the screens of the country comes out the film "The Legend of the Kolovrat". It is safe to say that this hero is still an important part of the Russian epic and an important figure for the formation of its own Russian identity, which began to be laid back at the turn of the XI-XII centuries.

The history of Evpatiy Kolovrat is connected with one of the most tragic episodes of the history of Russia - the Mongol invasion, also known as the Invasion of Batu. It was the invasion of the Mongol Empire in the territory of the Russian principalities in 1237-1240 in the framework of the Western campaign of the Mongols 1236-1242. A serious external threat came to Russia at the moment that was not the most suitable for it, the Russian state was in a state of feudal fragmentation and could not resist the forces of the invaders by combined forces. On the other hand, united tribes and states could not resist the Mongolian army of that period, as evidenced by the conquest of the large states of China, the Caucasus and Central Asia. 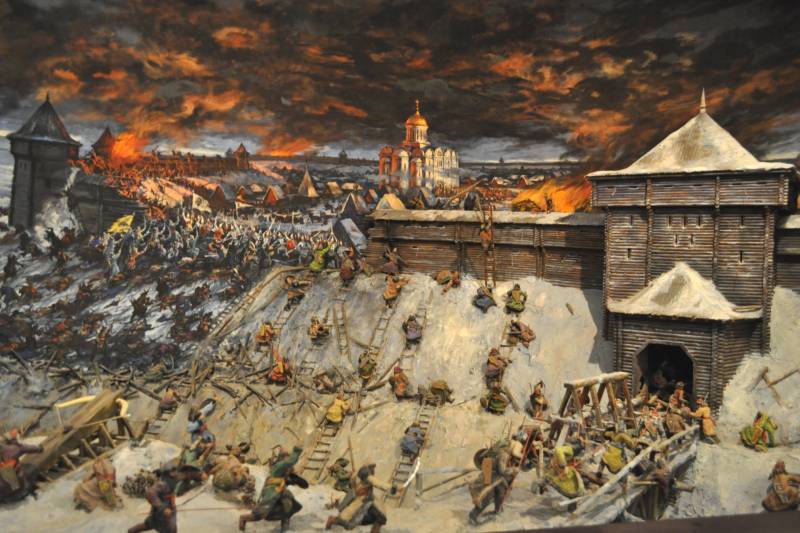 Fragment of the diorama "Defense of the old Ryazan in 1237 year"
The Mongol invasion of Russia itself began at the end of 1237. The Ryazan principality was the first under the rink of the Invasion of Batu. Having defeated the combined army of the Ryazan Prince Yuri Igorevich and the Murom Princes Yuri Davydovich and Oleg Yuryevich on the Voronezh River, the Mongols moved into the depths of the Russian lands. The prince of Ryazan himself survived this battle and returned to Ryazan, to which the Mongol army began its siege on December 16 of the year 1237. The first attacks of Ryazan were able to repel, but the forces of the defenders were melting, and more and more new troops were approaching the Mongols, who were returning from Pronsk, Igeslavl and other cities from December to 16-17. It is worth noting that Ryazan was protected by ten-meter ramparts, on which there were high oak walls with loopholes. The fortifications in winter were poured with water, which froze, making them even more impregnable for the storming troops.

The defenders of Ryazan heroically defended the city for five days, bringing stones, arrows and boiling tar on the heads of the Mongols, fighting in hand-to-hand combat. However, on the sixth day, their forces were almost exhausted, many soldiers were killed and wounded by that time, and those who remained in the ranks practically fought on the walls, while the Mongols could give their troops rest, rotate and receive reinforcements. In addition, at the final stage of the assault, the Mongols widely used stencils. The last assault on the city began on the night of 20 on December 21, after a stubborn battle, the Mongols broke into the city, it fell on the sixth day. In this case, the invaders staged a massacre in the city, destroying the vast majority of the inhabitants of Ryazan, including children and infants, and the Prince of Ryazan, Yuri Igorevich, was killed. The fortifications were also completely destroyed, and the city itself was never rebuilt in this place. In this case, the Mongols ravaged not only Ryazan, but the whole principality, destroying a large number of cities and settlements. Some of them historians can not identify today. For example, the exact location of Belgorod Ryazansky, which was erased by Batyi’s tumens from the face of the earth and was never restored, is unknown.

By the time the Mongols invaded Russia, Evpatiy Kolovrat was about 35 years old. Apparently, he occupied a rather honorable place under the Ryazan prince, was a boyar or rather a voivod. He was also quite an experienced warrior, a talented commander, and possessed great physical strength. Even before the fall of Ryazan, Prince Yuri Igorevich sent his people with a request for help to the princes Vladimir and Chernigov. It was in Chernigov that Evpaty Kolovrat was at that time, and here he found the news of the death of Ryazan and the death of the prince. 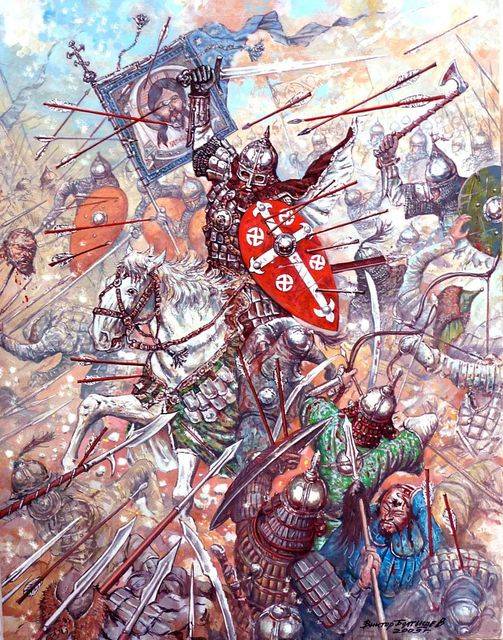 Returning to his homeland, he found the city and the principality ruined and plundered. He met only scorched earth and ashes littered with the corpses of the slain. Kolovrat was shocked by the cruelty of the conquerors. Perhaps he returned to his native land already with a small detachment of Ryazan soldiers, who were at the embassy to the Chernigov prince. On the spot, he replenished his forces with surviving people who were outside the city walls and hiding in the woods. In total, he managed to assemble a detachment with a total of up to 1700 people. With these small forces, Evpaty Kolovrat set off in pursuit of the Mongols.

It was already possible to overtake the conquerors on the territory of Suzdal lands. The Mongols did not expect attacks from the rear, confident that the Ryazan detachments had already been completely destroyed. Evpatius Kolovrat's attacks on the rearguard of the Mongolian troops turned out to be sudden for the latter. Most likely, Kolovrat also used guerrilla tactics, attacks from ambushes, from the forest. In any case, he with small forces inflicted serious losses on the enemy. The Mongols, who did not expect attacks from the devastated Ryazan principality, were horrified, believing that the dead had rebelled to avenge themselves. At the same time, how many battles the squadron Evpatiy Kolovrat spent is not known for certain, no consensus on this matter exists. It is believed that there could be several of them and they were quite successful, as they were able to sow real panic in the rear of the Mongolian troops.

What was happening in the rear agitated Batu, and he turned considerable forces against the attackers. In the end, an overwhelming advantage in troop numbers decided the outcome of the confrontation. The Mongols were able to impose the battle of Evpatiy Kolovrat on the field, in fact, in complete encirclement. At the same time, Baty sent against his brother Kolovrat his wife Hostovrul. He praised the khan that Kolovrat would bring him alive, but he himself died in battle. As noted in the chronicle “The Tale of the Ruin of Ryazan Batu”, Kolovrat cut it in half with his sword, straight to the saddle. 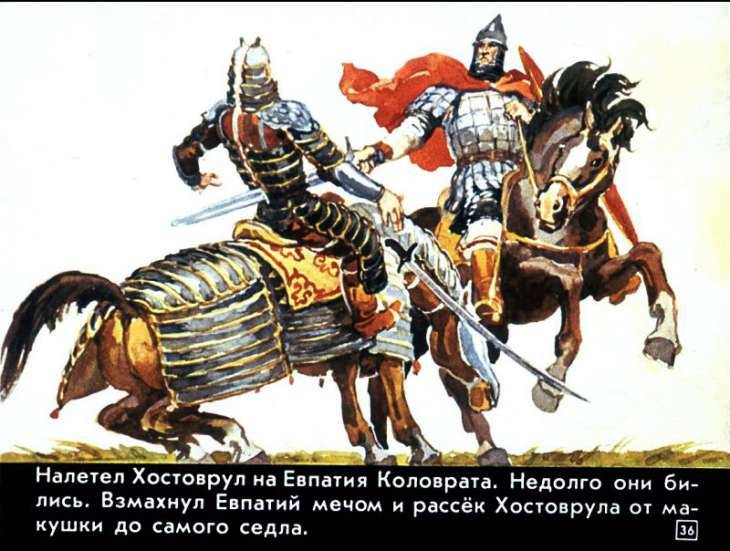 Shot from 1988 filmstrip of the year "The Tale of Evpatiy Kolovrat"
According to legends, Baty, who did not want to lose his people any more, sent an ambassador to the Russian soldiers with the question: “What do you want?”. “Only die!” Was the answer. In the end, seeing the stubbornness with which a handful of Russian warriors fight, the Mongols used vices against them (stone-throwing machines intended for the destruction of fortifications). It was under a hail of stones that the last Russian soldiers from the Kolovrat squad and the hero himself died. Admittedly admiring the courage of Yevpaty Kolovrat, and also as a sign of respect for his courage, Baty released the captured wounded Ryazan soldiers from his detachment with the body of a killed hero, so that they would bury him according to their customs.

Evpatiy Kolovrat's personality, as well as many characters and events of the XIII century, for obvious reasons, is shrouded in many questions and secrets. For example, questions are often discussed whether Yevpaty was a Christian or a pagan? Those who consider him a pagan indicate his name and surname. In their opinion, Kolovrat is a Slavic pagan symbol of the sun, and the name Yevpatny is not in Svyattsy. Both statements are incorrect. There is no ethnographic source that would confirm the ancient Slavic pagan origin of the word kolovrat and its relation to the sun. On the contrary, it is reliably known that a gear device for cocking machine gun self-propelled guns mounted on a special machine-frame with wheels (in Russia crossbows were called gun guns for self-rifles) was known as a gunworm. And the name Evpatiy can be directly related to this device or crossbow case.

If we talk about the name of Evpaty himself, then this is a modified form of the Greek manor Hypatius. In ancient Russia, it was quite common, as it was associated with the revered holy priest-martyr Ipatiy Gangrsky. In honor of him in Kostroma, even one of the oldest Russian monasteries was built. At the same time, small changes in the pronunciation and spelling of the name Ipatii are associated with the peculiarities of the linguistic tradition and do not constitute anything special. The same Greek name George in the Slavic tradition was modified at once into two different derivative names - Yegor and Yuri. 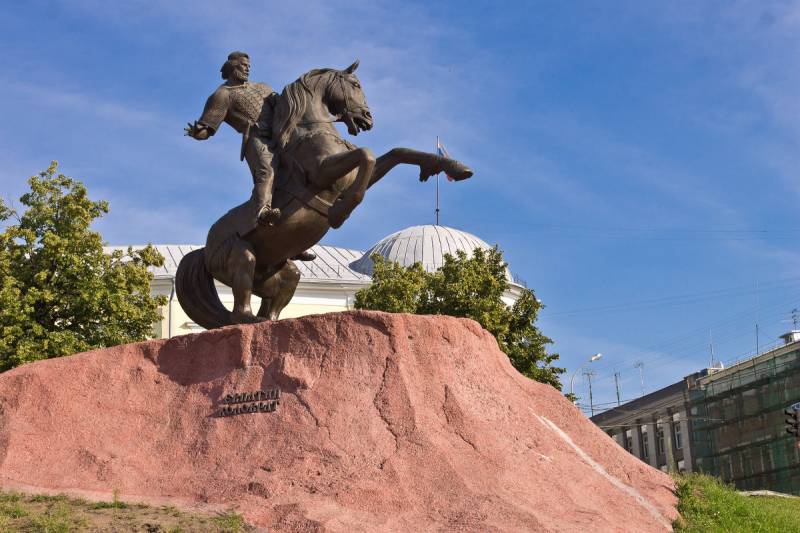 Monument to Evpaty Kolovrat in Ryazan
There is also a version that Evpaty is a collective image that can symbolize not even different people, but all of Russia, which perishes, but does not surrender to the invaders. The same “Tale of the Ruin of Ryazan Batu” is characterized by features of epic epic songs of the XIII-XIV centuries. This work can be regarded as more artistic than historical. Symbolism and hyperbole, which are present in the narration, may also point to this, as well as in the text of the story there were numerous inaccuracies associated with historical characters. However, even if Evpaty Kolovrat is only a beautiful legend and he is a collective image of the best Russian warriors or even of all of Russia, it is still important for our history. Whatever it was, during the Mongol invasion of Russia, it was quite possible to meet Russian people of unprecedented fortitude, capable of performing various feats. Thanks to such people, the Russian warriors were able to gain fame in the world, and the Russians themselves are perceived as a people deserving respect.

Currently in our country there are three monuments dedicated to Evpatiy Kolovrat. All three are located on the territory of the Ryazan region. The first was located in the town of Shilovo, according to some sources it was this town that was the birthplace of Kolovrat. The second monument, he is the most famous, was installed in 2007 in Ryazan itself, it is located in the center of the city on Pochtovaya Square and is relatively close to the Kremlin. The third monument was erected on the outskirts of the village of Frolovo towards the village of Ryasy (in the Shilovsky district of the region).