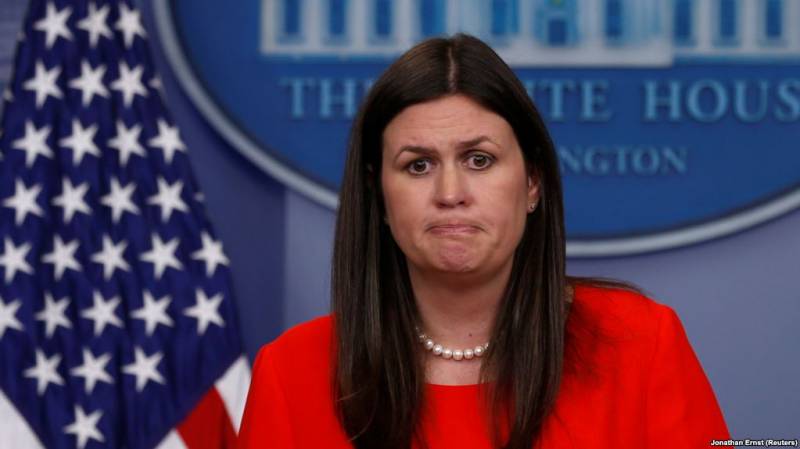 From the material of the resident of Syria Riyadh Farid Hijab, reporting on the situation in the SAR and around the SAR:

Throughout this week, overseas intelligence services and diplomats almost daily boasted of the complete release of the secret capital of ISIL (* banned in the Russian Federation). And then it turns out that this once peaceful city (Raqqa), which the Western coalition has practically razed to the ground, is not yet protected from terrorists? Otherwise, what can prevent our military?

We are talking about the comments of Sarah Sanders (USA), in which she accused the Syrian troops of allegedly trying to block the release of Raqqi. The statement of Sanders really raised questions: if Raqqa, as stated in the United States, has already been liberated, then what is Assad’s troops “preventing”? ..

Continuing Riyadh material:
No less anecdotal looks and the statement of the representative of the US foreign ministry. On its website, the State Department warned citizens of the country about the danger of traveling to Syria, to the province of Idlib, where Russian and Syrian forces allegedly continue to inflict air strikes.

In this unsubstantiated accusation, the wording amused me personally. After all, even in relatively safe for life cities like my native Aleppo, the capital of Damascus or settlements of the province of Lattakia, I have never met a crowd of tourists and businessmen who came from overseas. As for Idlib, he is actually occupied by the terrorists of “Jabhat an-Nusra” (* banned in the Russian Federation).

Perhaps, in such an absurd way, the representative of the US diplomatic agency decided to warn his intelligence officers and special forces, who, according to the residents of this locality, are fully in the ranks of the militants ?!

Further in the material it is said that the Serbian sappers began the demining operation of the cities of Aleppo liberated from the militants of Aleppo. In a number of cases, they participate in joint demining actions with their Russian and Syrian counterparts. Recall that the Russian officers have prepared several hundred Syrian sappers, who have already been able to neutralize tens of thousands of explosive devices in Aleppo, Palmyra, Deir-ez-Zor and other cities of the SAR.

For reference: Riyadh Farid Hijab (1987 r.). Born in the Syrian city of Aleppo. He graduated from St. Petersburg State University. In 2017, he returned to Syria, in his native city.

Ctrl Enter
Noticed oshЫbku Highlight text and press. Ctrl + Enter
We are
Reports from the militia of New Russia for 27-28 September 2014 of the year
Military Reviewin Yandex News
Military Reviewin Google News
36 comments
Information
Dear reader, to leave comments on the publication, you must to register.