October 20 2017
9
The reason for fame is Perkins' book Confessions of an Economic Hit Man, which was released in 2004 in the United States, then translated into four dozen languages ​​and published in different countries. In the United States and in many other countries, it has become a bestseller, taking the top lines of the ratings. In Russia, this book appeared on the book market in the 2006 year, and since then several of its publications have been published. 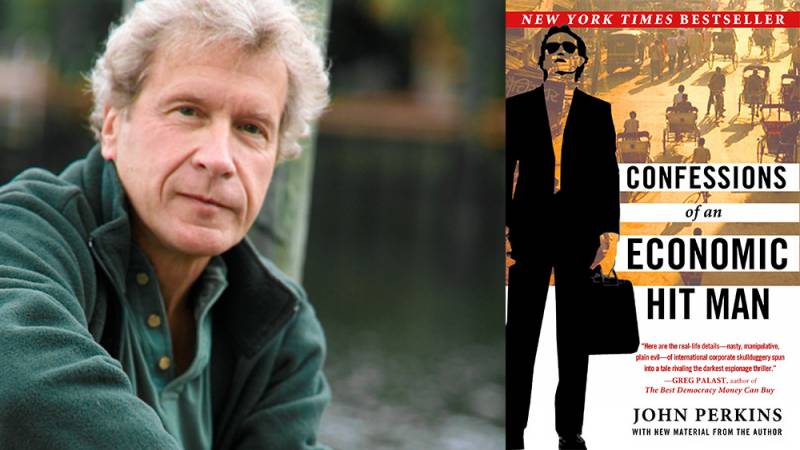 John Perkins was born on January 28 of 1945 in Hanover, New Hampshire (USA). He refers himself to those who are called self-made man. In 1966, he entered the College of Business Administration at Boston University (Boston University). He got married and met his wife's uncle named Frank, who, according to Perkins, held a high position in the US National Security Agency (NSA). In 1968, after graduating from college, on the recommendation of "Uncle Frank", he enters to serve in the American Peace Corps, through which he goes to work in Ecuador. There, in the jungles of the Amazonia, he performs the task of providing the American oil corporations with favorable conditions for oil exploration and production. Since local tribes were seriously resisting these corporations, which destroyed the jungle and destroyed the aboriginal habitat, John spent with them "explanatory work, persuading them to move to" civilized "places. In the Amazonian jungle, he met the vice president of a major American consulting company, Maine (Chas. T. Main) from Boston, and from 1970 he began working at this company.

According to Perkins, the company took him to work only because, having made out in the Peace Corps, he passed the NSA test. The test was conducted on the subject of John’s ability to perform the functions of an employee with the conditional name “economic killer”.

Since that time, he began an exciting life: traveling around the world, stopping at luxury hotels, dining at the best restaurants, meeting with representatives of the American establishment, negotiations with important foreigners, good salary.

Quickly enough, John has grown to the post of chief economist at Maine.

From the height of this position, he realized that the company should pave the way for the International Monetary Fund, the World Bank, transnational corporations and transnational banks in the third world countries.

First, impose loans to IMF, WB, and American banks on other countries, placing these countries on a debt hook. Secondly, to make contracts for the supply of goods, work and services exclusively with US companies. Thirdly, to promote in these countries such “reforms” that cleared the way for the arrival of other American companies (a gentleman's set of reforms, which later became known as the “Washington Consensus”).

Perkins himself had to solve mainly the first task - to throw a debt loop on the neck of the country. Both “carrot” and “stick” were used. "Gingerbread" were promises to connect companies with projects close to the first persons of the states; to accept in a company participating in projects for a good position relatives of the first persons; send their children to free education in America. If the “carrot” did not work, they resorted to the “carrot”: they casually reminded about the fate of some presidents, prime ministers and monarchs who refused to accept the “gifts of the Danaans”. A classic example is the fate of Iranian Prime Minister Mohammed Mossadegh, who was overthrown by American and British intelligence agencies in 1953 (Operation Ajax).


Economic killers are the first echelon of American pressure on the country. If they did not succeed, the second echelon came into play - the special services.
John Perkins calls them "jackals". The first persons of states were overthrown, and more often they were killed. Perkins recalls that a number of the first persons with whom he had to work died in disasters or died mysteriously. John was especially struck by the deaths of Panamanian President Omar Torrijos and Ecuadorian President Jaim Roldos. Both died in aviation disasters.

Sometimes the "jackals" could not achieve the desired result. Then the third echelon, the armed forces, entered into force. During the time of John Perkins, Cambodia, Vietnam, Laos, and the Dominican Republic underwent invasions, which sometimes turned into protracted wars.

In Confessions of an Economic Killer and subsequent works, Perkins pays great attention to the topic of so-called economic growth. This growth has become the religion that Washington imposes on other countries. Economic killers, driving around to different countries of the world, are telling their leaders: IMF loans, the World Bank, and Western banks will provide you with “economic growth”. What is it real?

Firstly, economic growth (even if it really takes place, and does not represent drawn figures) provides the West with profits that leave the country either to America, or to Europe, or to offshore.

Secondly, even if the crumbs of economic growth remain in the country, they get rich.

Third, economic growth is achieved at the cost of plundering natural resources and environmental pollution in countries where export-oriented production facilities are built with the money of the World Bank and other Western lenders. So, in Amazonia, tropical forests disappeared, and rivers and lakes were covered with oil divorces.

The work of John Perkins in the role of economic killer lasted about a decade - from the beginning of the 70-x to the beginning of the 80-s. Over the years, he visited Ecuador, Colombia, Peru, Panama, Indonesia, Egypt, India, Pakistan and other countries. And everywhere the same picture: the growth of external debt, progressive social polarization, economic degradation and simplification of the structure of the economy, increased corruption, the economy going into the shadows.

At the start of the 80, Perkins began to experience agonizing experiences. Conscience signaled that his professional activities were incompatible with moral norms. And he left the company "Maine".
I was engaged in my own business; He headed the company, which was one of the first in the United States to produce electricity from coal slime. In 90, he became involved in environmental protection, became a co-founder of the public organizations Dream Change and The Pachamama Alliance (their profile is environmental protection, sustainable development, social work). He was interested in questions of psychoanalysis, anthropology, and social psychology. He has been doing this so far, the books Psychonavigation, The Spirit of the Shuars, Without Stress, The World Is What You See It, The Change of Face have come out from under his pen.

And the main project of his life was the writing of a book in which he tried to summarize everything he had seen over the decade of work as an economic killer. He wrote the book in complete secrecy, realizing that the "owners of money" and the special services can destroy not only the manuscript, but also its author. The finished manuscript was sent to dozens of publishers, but none of the publishers decided to publish the book. Only one publishing house, which was on the verge of bankruptcy and no longer lost anything, ventured to take the manuscript into work. The book was released in 2004 year.

The reaction of official Washington and American big business to the book "Confessions of an Economic Killer" was instantaneous. The author was accused of the fact that the book is the fruit of a sick fantasy. What is another "pearl" in the market conspiracy literature. Many leading American newspapers and magazines have stated that the facts presented by the author are not documented and do not correspond to reality. That John Perkins is a poorly educated person, compensating for the lack of education with rich fiction. Later it turned out that the State Department and the US intelligence agencies literally checked every sentence of the book under a magnifying glass, but no inconsistencies were found. The fact that everything said in “Confessions” corresponds to reality is recognized by many former statesmen. The book was highly appreciated by the former Minister of Finance of Greece, Janis Varoufakis, confirming that he himself was at one time under the gun of economic murderers from the IMF, the ECB and the European Commission.

Attempts to discredit the book and its author failed miserably. Publishers rushed to replicate the book. Perkins began to be invited to television studios, to film films, to give university lectures.

He spoke in the auditoriums of Harvard, Oxford, more than fifty universities around the world.

John Perkins sympathizes with Russia. In June 2017, he was a guest of the St. Petersburg International Economic Forum. In an interview with Russian journalists, Perkins constantly emphasized that Russia must step down from the path of capitalism. This, in his opinion, is a model of the "economy of death." It is very difficult for America to jump out of the rut of “death”, and Russia, according to Perkins, has much greater chances to start building an “economy of life”. Here is a fragment of his interview with Russian television 4 June 2017:

“... The so-called predatory capitalism ... has a single goal - to maximize the short-term benefit of shareholders, not improving the world around us, not helping society, and we should change this situation. We need to get away from the current form of predatory capitalism, when corporations kill competition or buy rivals, generating only short-term profits. The system should work in such a way as to bring a decent income to investors, but at the same time investing profits in the ecology and society so that the world becomes better for your and my grandchildren. Therefore, profits should be invested in the development of new technologies, renewable resources, the creation of an economic system that itself would be renewable. As I call it - in the economy of life. And Russia is in an excellent position to participate in the creation of this new economy. You have your leader, Putin is a strong leader. And Russia has a great technological история».

In conclusion, I will give the names of other (besides “Confessions”) books by John Perkins (the year of the first edition is indicated):

The game of the old empire: the secret world of economic killers and the network of global corruption (2007;

The Secret History of the American Empire, 2007;

Deceived: The economic killer explains why the global financial markets exploded and what we need to do in order to restore them (XC); 2009;

From the pen of John Perkins comes a lot of articles and notes posted on his personal website.

Ctrl Enter
Noticed a mistake Highlight text and press. Ctrl + Enter
We are
How the US uses surveillance and scandals to spread its global control (AlterNet, USA)List of destroyed the largest and most high-tech enterprises
9 comments
Information
Dear reader, to leave comments on the publication, you must to register.