"Kalashnikov" for the Navy 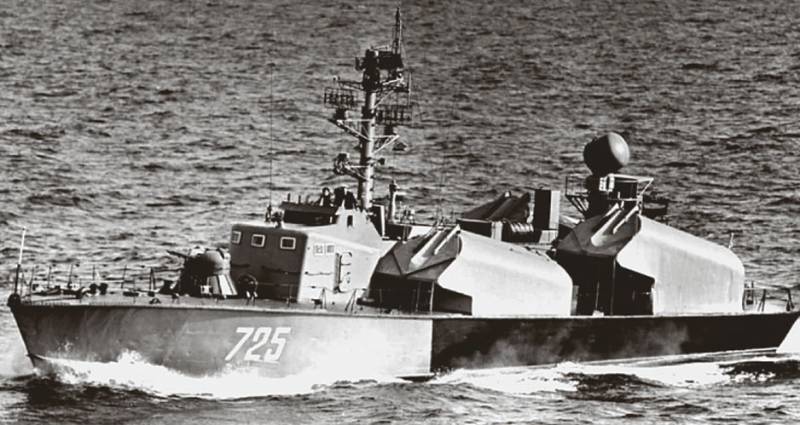 Two small Soviet-built missile boats (Project 183P) Egyptian fleet sank the Israeli destroyer Eilat near Port Said, which conducted radio intelligence. Of the four P-15s launched by the KR, three fell into the destroyer, and the last flopped directly onto the heads of his crew sailors who were in the water: their broken ship was already sinking. In principle, the destruction of the Eilat would have more than enough the first two missiles, because three or four could have sunk a light cruiser like, say, the American Brooklyn.

The loud naval victory of Egypt took place primarily thanks to Soviet military advisers who helped to master, and then apply the new weapon. For Western countries, the death of "Eilat", even if the old ship (the former English destroyer Zealous - "Zealous" 1944, built), was a shock. Of course, the enemy was aware that by the beginning of the 60's, the Soviet Navy had acquired the world's first missile boats and soon began delivering them to friendly regimes. However, in the West, these boats of projects 183Р (according to NATO classification Komar) and 205 (Osa), armed respectively with two and four missiles of П-15 (SSN-2 Styx) type, were contemptuously called the weapon of the poor. Maybe not unreasonably, but their “sting” turned out to be very sharp.

The P-15 rocket, born in Dubna near Moscow in the design team of Alexander Bereznyak (now the Raduga GosMKB), has become the world's equivalent of Kalash in terms of its worldwide popularity. The boats with the P-15 received from the USSR, except Egypt, the allies of the Warsaw Pact, Algeria, Angola, Vietnam, India, Indonesia, Iraq, China, Cuba, Libya, North Korea, North and South Yemen, Syria, Somalia, Finland, Ethiopia (then went to Eritrea) and Yugoslavia. In addition, the production of P-15 (and the construction of boats on the model of the Soviet projects 183Р and 205) mastered the PRC and the DPRK. This guided projectile with an active radar or thermal homing head in the first modifications could hit targets at a distance of 40 kilometers. A powerful high-explosive warhead allowed the Stix to punch 180-mm steel and tear apart the stuffing of an enemy ship within 10 radius. To assess these indicators, we can say that the thickness of the armor belt of American heavy cruisers of the Baltimore type, which also served in the 70, was 152 millimeters.

In December, 1971, the victim of the P-15, in this case released by the Indian missile boat of the 205 project, was another destroyer of British origin - the Pakistani Khaibar. The Indians also sank three vehicles in the port of Karachi. According to some reports, in the 1974, the PLA fleet successfully applied its “Styxes” against the South Vietnamese Navy when China seized the Paracel Islands.

The first of the countries of the “American orbit” were learned by the Israelis from a collision with Soviet-made missile boats, hurrying to equip their Navy with similar ships (type Saar of French design) with the Gabriel RCC. The combat unit "Gabriel" was less powerful than the P-15. However, it was enough to sink Arab boats, given the superiority of the “Saar” in the number of missiles on board (up to eight) and the advantages in artillery weapons (76- and 40-mm AU against 30- and 25-mm). Skillfully using the "Saary" in cooperation with helicopters, as well as electronic warfare, the Israeli sailors in 1973, were able to destroy several missile boats of the Navy of Egypt and Syria, without losing any of their own, and this with a smaller range "Gabriel."

Impressed by the debut of the Styx, many naval forces of the world began to be equipped with missile boats, including such non-poor countries like Germany, Italy, Sweden (which, by the way, was the first in the West to adopt the rather awkward type) Robot 60 for destroyers), Norway, Denmark, Japan. The main RCCs abroad were the French Exoset, the American Harpoon, the Swedish RBS-08, the Norwegian Penguin and the Chinese variations on the P-15 theme.

It is obvious that rocket boats with the P-15 in the Soviet philosophy of naval combat were originally intended to fight primarily with large warships and enemy transports, and not with "classmates." Following this, our developers proposed to re-equip the large-scale “classic” destroyers of the 30bis project, which no longer met the requirements of the time, with three three-container launchers with П-15 (instead of torpedo tubes and aft 130-mm turret). Sound rocket ships would have turned out, but the Main Command of the Navy "hacked down" the idea at the root, finding the P-15 unpromising for the sea and ocean zone. In truth, those destroyers themselves looked such, while maintaining the design composition of artillery and torpedo weapons. Meanwhile, it was in this way that the Chinese began building up the strike potential of their fleet, equipping the Hayin-2 (Chinese P-15) missiles of the 7 project built by the USSR, built in 1941 – 1942, and also sentinel ships of the project 50. In our fleet, these veteran patrols (“fifty dollars”), the last of which were written off by the 90 years, remained almost with the original weapon set. Moreover, China put into operation a rather large series of rocket destroyers (type “Lyuda”) based on the Soviet “classic” project 56. Initially, unlike the prototype, instead of torpedo tubes, they had three-container launchers for Hayin-2.

In the 70-ies after a serious improvement of the P-15, the result of which was the emergence of the Termite SCRK (the P-15М with a range of 80 km), they began to equip large ships in our Navy. This complex was obtained during the modernization of the BOD project 61М and large rocket ships of the project 56У. For "Termit" was provided and a nuclear warhead.

P-15 in the "termite" incarnation is still in service with our and a number of foreign fleets (including NATO’s Black Sea neophytes). She equipped the rocket boats of the type "Lightning" and coastal mobile SCRC "Rubezh". Even in the archaic Navy of the DPRK, carriers of the P-15 operating in the coastal, especially the island zone, pose a real threat to modern ships of a potential enemy, including the destroyer and missile cruiser. Therefore, the fight against the "Styx" command of the US Navy and South Korea is considered one of the important tasks.