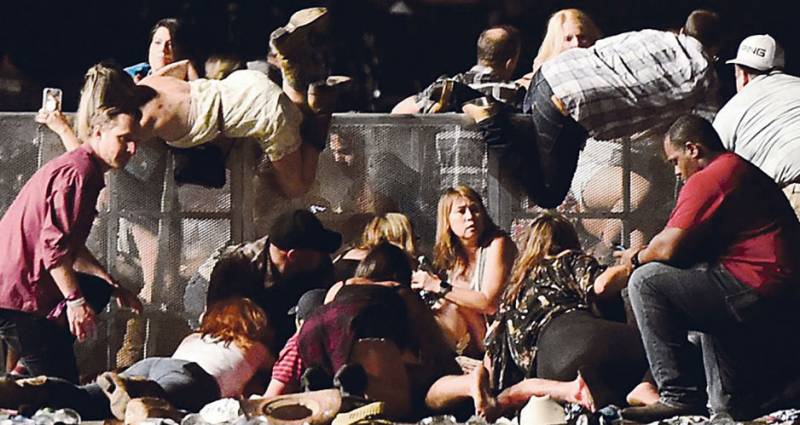 On the night of October 2 in Las Vegas, the largest massacre occurred in the entire history USA. 59 people died, 527 suffered.

64-year-old Stephen Paddock, according to available information, committed suicide even before the arrival of special police forces. A search of the hotel room where the fire was fired from was found in excess of 20 units. weapons. It was suggested that the shooter was mentally ill, but no evidence of this was found. The Las Vegas police sheriff Joseph Lombardo stated: Paddock intended to escape from the room, and judging by the number of weapons, he could hardly have committed a massacre alone.

Already 2nd news Amaq, a banned Islamic State agency in Russia, called Paddock "a soldier who converted to Islam just a few months ago." However, US law enforcement agencies have already stated that there are no grounds to consider it somehow related to the IG. It would seem that one can close this topic, but certain doubts remain. The thing is how the arrow was called in the IG. According to the Igilov’s classification, “warrior” is a member of the Islamic State, and “soldier” is a supporter who has joined this organization. Usually, when a terrorist act is committed somewhere, the media affiliated with the Islamic State indicate that the terrorist act was committed by a supporter (“soldier”), that is, a person who, under the influence of terrorist propaganda, decided to prepare and carry out an attack. A “warrior” is a person who, in addition to what was said, gave IS Bayat (oath). According to a Site Intelligence Group resource tracing terrorist content on the Internet, the IS issued an official communique in which Paddock was named as Abu Abdul Barr al-Amriki, heeding the call of IG leader Abu Bakr al-Baghdadi for the need attacks on coalition countries.

Of course, such a statement can be argued that the IG takes responsibility for attacks, to which it has nothing to do, in order to earn the image of a group capable of arranging attacks anywhere, and thereby create the impression that its capabilities are quite large. This view has the right to exist, but the IG does not always “fit” even for resonant terrorist attacks. If Paddock was indeed considered a “warrior” by the igilovtsy, this means that he was assigned to this cell by this organization. Given the statements of the Las Vegas police chief, the question of whether the terrorist prepared alone or assisted was open.

Let us analyze the version in which the IG really had to do with the shooting from the first to the second of October in the largest city of Nevada. The destruction of the Middle East, including Syria and Iraq, the creation of conditions for the IG phenomenon led to a reciprocal effect, when fundamentalists of all stripes, using modern technologies in combination with organizational experience, distribute thousands of militants from all over the world to jihad remotely without direct contact. Without addressing the issue of their motivation, we can safely say that the task was performed more than successfully. US authorities to recognize the shooting in Las Vegas as a terrorist attack is extremely disadvantageous, because it calls into question the professional suitability of the special services and the dubiousness of allocating huge amounts of money to them. In particular, it may become clear that the measures taken since the time of the Patriotic Act of 2001 of the year (USA PATRIOT act, canceled in the summer of 2015 of the year) to oversee citizens are ineffective and insufficient to prevent new types of terrorist attacks. In addition, the multibillion-dollar funds allocated to such wiretapping programs like PRISM, only partially eliminate the threat that the United States itself under various administrations created. PRISM - a whole range of activities of the US National Security Agency (NSA) for monitoring Internet traffic, for which IT giants such as Microsoft, Apple, Google, Facebook, YouTube, etc. were attracted. In addition to this program, there are other, much less illuminated in press. The data intercepted from satellites or cable lines, internal communications, etc., is then stored in the colossal NSA data centers located, for example, in the state of Utah, with storage capacity, according to some estimates, of the order of 12 exabyte. However, the exact specifications are classified.

The huge costs of surveillance both for its citizens and for foreigners around the world may suggest that if you do not prove their justification, you will need to either reform the approach or reduce the budget of the entire intelligence community. In reality, this is unlikely to come to this, but the American intelligence services need no extra noise around this issue. Accordingly, the version of Paddock as an “IS soldier” is extremely disadvantageous to them.

Let us see why new information and cognitive technologies are effective for organizing terrorist acts and often pose a serious problem for security and intelligence services in the matter of countering. Apparently, the answer should be sought in the features of the recruitment of new members who identify themselves as IG. The fact is that modern communication technologies allow to receive significant amounts of very different information, including propaganda video and audio clips, propaganda messages, etc. With proper presentation of extremist ideas, they are inspired without any connection with those who prepare content. A potential supporter, after having seen and heard enough, decides first to join the IG, and then to launch an attack in order to confirm his bayat. Often, recruiters communicate with remote recruiters secretly from everyone (in some cases, it is possible, without using the Internet at all or with the use of code phrases) and it is hardly possible to identify such a recruit ahead of time.

Previously, for recruitment, terrorists had to meet with a potential member of the organization, now the involvement in their ranks has become contactless. Consequently, no tracking programs and algorithms used by them are able to identify the future "soldier-soldier." At best, out of the billions of messages, a huge number of potential accomplices will be filtered out who cannot be shown anything. And the likelihood of the next shooter only increases, and to prevent such a course of events is extremely difficult both at the stage of prevention and in the process of preparing an attack by a terrorist.

Buy yourself a terrorist attack

In addition to the above, there is another serious aspect that facilitates the work of terrorist structures in the United States, however paradoxical it may sound. Of course, the point is the availability of weapons, including automatic ones, to citizens of this country, which is guaranteed by the 2 th amendment of the constitution of 1791 of the year. In many states, it is easy to acquire enough weapons and ammunition to commit the most serious crimes, - the statistics of the last decades confirm this very clearly. Massacres in the United States have long been, if not the norm, then at least common, as everyone is accustomed to suicide bombing somewhere in Iraq. Accordingly, in the United States, any potential recruit who identifies himself as a terrorist organization, with the availability of funds and compliance with conspiracy measures, is able to independently organize and carry out an attack. The difficulty of identifying a potential offender along with the peculiarities of local law increases the chances of successful implementation of the planned. If in Russia or, for example, in the EU countries, terrorists most often use improvised means - cars, knives, IEDs, in the States it is much more opportunities due to the free access of their citizens to military weapons. In a particular case, it does not matter much whether Paddock had personal, mental problems, because of which he succumbed to Islamist propaganda, or acted for ideological reasons. It is important that the IS managed to convert his desire into concrete actions, which he financed, prepared and committed. Properly applying propaganda work, terrorists achieve an effect when their vices begin to prevail in people, even if they are based on ambition (in particular, on the desire to become famous) or a sense of justice (alternatively, retaliation to the US government for wars in other countries). From the point of view of efficiency for the organizers of the IG, it does not matter whether a person is imputed or not, there is a pathological propensity to violence in him or he is guided by the above-mentioned reasons. The main thing - to turn it into a weapon in their hands. Then the information resonance follows, which is used to advertise and stimulate the arrival of new recruits.

Some conclusions. The protection created by the American government against terrorist organizations, largely cultivated by him, shows, by the example of Paddock, the limit of its effectiveness. Psycho-cognitive technologies, under certain conditions, make it possible to recruit recruits from among sympathizers remotely, without direct contact in verbal form, by correspondence or by telephone. Thus, the capabilities of the special services for the preventive detection of a recruit associating himself with a terrorist organization are significantly reduced or even completely leveled out. He himself, without the help of the parent structure, is looking for resources and opportunities for attack, which eliminates the likelihood of tracking transactions, since in financial terms a recruit is usually self-sufficient. Free access to a wide range of weapons in the United States only makes it easier for a potential terrorist to attack and increases the number of future victims. All of the above is a vulnerability in the US security system, which for a variety of reasons may be hidden by their authorities. After all, the promulgation of such information raises questions about the desirability of spying on citizens and restricting their freedoms in favor of state security, and also strengthens the position of those who advocate a revision of the right to bear arms or at least toughen the law. In the latter case, the changes are unprofitable to the arms lobby, and if it was previously pressured after executions, for example, in schools, when the problem was largely confined to difficult teenagers and inadequate people with mental disorders, now this list can add an item on the need to deprive potential terrorists opportunities to prepare an attack. Thus, if the version with the involvement of the shooter from Las Vegas to the IG corresponds to reality, there are a significant number of influential organizations within the United States that will not publicly admit the real state of affairs that is so inconvenient for them. So, they will try to do everything so that the version of the lone psychopath remains official, after which the case will be closed.

Ctrl Enter
Noticed a mistake Highlight text and press. Ctrl + Enter
We are
Jihad 4.0What you didn't want to know about England
10 comments
Information
Dear reader, to leave comments on the publication, you must to register.