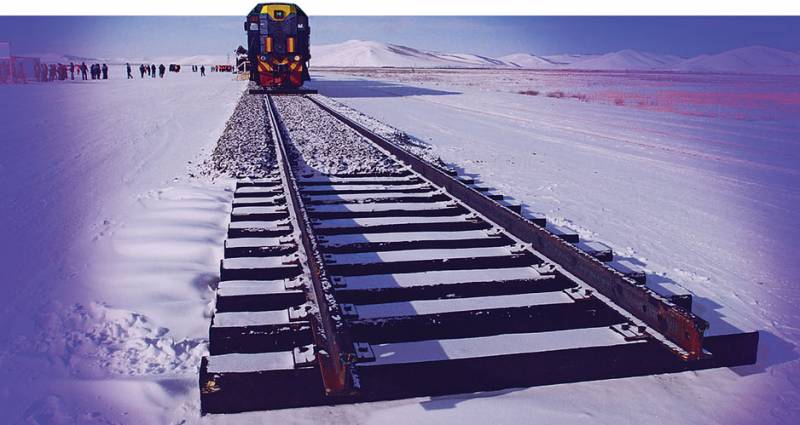 The increasingly complex military-political situation in the border with Russia abroad increases the relevance of railway projects in the Caucasus, in the Lower Volga region, in the North-West, in Siberia. The need is already high due to the economic development of the territories and interregional economic relations. But most of these projects, developed at the end of 40-x - the beginning of 70-x, are still being postponed indefinitely. Recently this fate befell the Northern Latitudinal Passage, or the Polar Transsib.

There is no need to prove the strategic importance of steel highways and port-railway corridors for strengthening the country's defense capability and, accordingly, ensuring its military-political security. But the transport system of Russia is still full of significant flaws. It is worth remembering at least some canned projects.

The importance of the Priarctic region of the country in ensuring the economic and military security of Russia is difficult to overestimate. Not to mention the colossal resource base of this region. Nevertheless, the construction of the Polar Transsib has already been transferred year after year.
"The parameters of the Northern Latitudinal Railway (NL) will be considered in the second half of October at a meeting of the interdepartmental working group on railway transport issues," said Alexey Chichkanov, Executive Vice President of Gazprombank. And the vice-president of the Union of Railway Builders, Alexei Stepanenko, explained: “The project is sufficiently developed, it is already on the verge of launch. Now it is up to the government to determine the configuration of the concession agreement ”(the project is planned to be implemented in the form of a public-private partnership).

This construction began in 2014, continued, albeit intermittently, in 2015. And then it was actually stopped, mainly for financial reasons. Moreover, the NLR, built at the end of 40-x - the beginning of 50-x, already qualified as a land complement to the Northern Sea Route. And if the NSR, including its port infrastructure and operational, that is, the ship base, is being revived from the beginning of 2000's, then the NLR is alas ...

This is the 800 kilometer highway Chum - Salekhard - Nadym - South Yamal (Bovanenkovo) - Urengoy - Korotchaevo with a branch to the LNG port of Sabbet (West Yamal) and exit in the future (plus 350 – 400 km) to Igarka and further to Norilsk . The total investment capacity of the main project of the NL (Chum - Korotchaevo) project is in excess of 600 billion rubles, the cargo traffic in the third to fourth years of operation is estimated to be at least 30 million tons.

The polar trans-Siberian railway was built, including to Igarka - Norilsk, from 1947, but was directively frozen already at the beginning of April, 1953. Although, we emphasize, even at the turn of 40 – 50-s, experts foresaw the military-strategic importance of the highway, as well as the insufficient transport support for the development of not only northern Siberia and the Far East, but also their links with other regions of the country.

The demand for this artery is due to the implementation of a large LNG project in Yamal and, again, an increase in traffic on the Northern Sea Route. The commissioning of the Chum - Korotchaevo route, according to the latest data from the Russian Railways and the Ministry of Economic Development, is planned no later than 2023. If this term will not be postponed ...

Back in 60-x - the beginning of 70-x, projects of Trans-Azov ferry communications of the Rostov region (Taganrog, Azov) and Krasnodar Region (Yeisk, Primorsko-Akhtarsk) with the Crimea were developed. This was required by the already predicted thickening of cargo and passenger traffic in the Taman-Kerch region, due to the development of rail routes to the peninsula through the Kuban. But under pressure from the leadership of the Ukrainian SSR, these projects were rejected. 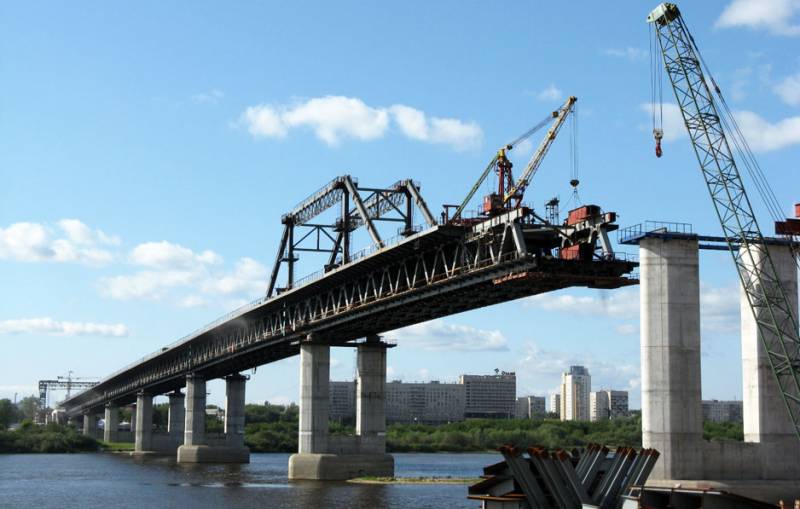 Today they are even more relevant, in view of the upcoming, moreover, a sharp increase in traffic in the direction of the Crimean bridge and the congestion of the Novorossiysk port-railway junction. But this is the citadel of the Black Sea fleet. And transport blockages are fraught not only with economic consequences.

An equally significant project is the trans-Crimean railway Simferopol-Belogorsk-Vladislavovka (130 km), which makes it possible to shorten the route from Kerch and Feodosia to Yevpatoria and Sevastopol by half in comparison with the current roundabout route through Dzhankoy. This construction was planned for 1949 – 1952 years and started in 1950. But soon the project was stopped under false pretenses.

Probably, intentionally, because the trans-Crimea railway was aimed at the development of economic ties between the Russian Crimea (via Kerch) with Krasnodar, Rostov and other regions of the RSFSR. But the political, economic and legal basis for including the Crimea in the Ukrainian SSR and changing its borders began to be prepared almost immediately after Stalin’s death (“Underground Crimea Lovers”).

The construction of the highway, repeatedly proposed by Russian experts, was rejected by the authorities of the Ukrainian SSR. In 2014, the project was planned for 2015 – 2017 years, but then it was postponed, ostensibly for financial reasons, until 2030. Although it is this artery that will prevent blockages at the entrance-exit to the eastern part of the Crimean Bridge and at the same time increase the throughput of the entire port-railway system of the peninsula. Not to mention the fact that this highway is extremely relevant for operational cooperation between the Sevastopol base and other facilities of the Black Sea Fleet in the region. But if the bridge enters into operation in the next year or two, the trans-Crimea railway will be at best on 2030 ...

Off-road in the border

For economic and geopolitical reasons, projects of the unified railway network in the North Caucasus and its additional “linking” with the Volga region, the Central European part of the Russian Federation and Transcaucasia remain no less relevant. These projects Novorossiysk - Tuapse, Southern Adygea (Khadzhokh) - Sochi, Azov port Achuevo - Slavyansk-na-Kubani, Salsk - Marvelous (Rostov region - the northern Stavropol), Cherkessk - Karachaevsk - Sukhum, Alagir - Tskhinval, Elista - Astrakhan, Budennovsk - Kizlyar. But the exact dates for the implementation of these projects, which were first developed in the first half of 50's - mid-70's, have not been officially announced yet.

Recall once again that the Lower Volga region with the North Caucasus - border areas. Therefore, the developed railway-port network in these regions and the presence of interconnected exits to other regions of the Russian Federation is a two-fold strategic task.

But still the railway tracks to Sochi and Tuapse - exclusively through Krasnodar / Khadyzhensk, and these are extra 150 kilometers. Which in turn aggravates traffic jams at the entrance-exit of the Tuapse port. The problem of almost 100 percent is solved in the presence of the Maykop-Khadzhokh-Sochi railway. To be more precise, the southern sector of our Black Sea coast adjacent to the border of the Russian Federation with Abkhazia is connected with the rest of the country only by the coastal Tuapse-Sochi-Sukhum railroad, which is increasingly overloaded in its Russian section. Until now, the mileage Novorossiysk-Tuapse has been in conservation, the launch of which would provide a direct rail link, we emphasize, along the entire Black Sea coast of the Russian Federation, and connection with the military-political ally - Abkhazia. It is hardly necessary to prove the significance of such a path in geostrategic terms.

It is noteworthy: according to many military leaders of the White movement, the capture by Georgian troops of Sochi, Krasnaya Polyana and Tuapse in 1918 – 1919, as well as the defeat of the Volunteer army in the Black Sea region in 1919 –– the beginning of 1920 –– was due that there was no possibility of operational troop transfer between Tuapse and Novorossiysk due to the lack of a direct railway line. The same flaws were listed in the Nazi military plans (1941 – 1942) as a factor conducive to the seizure by the Wehrmacht of Tuapse, Novorossiysk, the coast between them and the invasion of Georgia (through Abkhazia) along the coast. The situation was saved by the heroism of the defenders of this area.

No less problematic situation with the connection of the border of the Lower Volga region with the North Caucasus. There are two options so far: the super-long-haul route oriented along the Black Sea coast through Rostov-on-Don and the railway from Astrakhan to Derbent (hereinafter referred to Azerbaijan) along the Caspian coast. But, firstly, these highways are not connected with each other, and secondly, with such a configuration, vast territories of the North Caucasus are deprived of additional, and at the same time, the shortest, exits to the Volga region, and to the Caspian Sea, and to the Central European region of the country.

These issues were included in the agenda again at the beginning of 50 and later, but decisions were postponed every time. More precisely, we are talking about railway projects Elista - Astrakhan, Budyonnovsk (north-east of Stavropol) - Kizlyar (near-Caspian region of Dagestan), Salsk-Divnoye (connecting Rostov region with Stavropol and Kalmykia). But these projects remain on paper.

The same with the restoration of the Pskov-Gdov railway (125 km) along the coast of Lake Peipsi. Coming to St. Petersburg (along the current line from Gdov), it is of great strategic importance in connection with the Russian border located not far away with NATO members Latvia and Estonia. In addition, the social and economic development of the adjacent vast areas of the Pskov and Leningrad regions is directly linked to the same highway. But this project is still without movement. But the road worked with 1915-th, and even in the war. The Nazis completely destroyed it in 1944, and the projects of the beginning of 50-x and later on its restoration are still not implemented.

Geostrategic and socio-economic factors are closely interrelated in the country's railway-port system. In the Soviet period, they could be said to be in the background, for the majority of the aforementioned regions were not frontier ones. But with 1991, the geopolitical configuration has changed dramatically. Therefore, the elimination of flaws in the ways of communication cannot be postponed for the distant future.