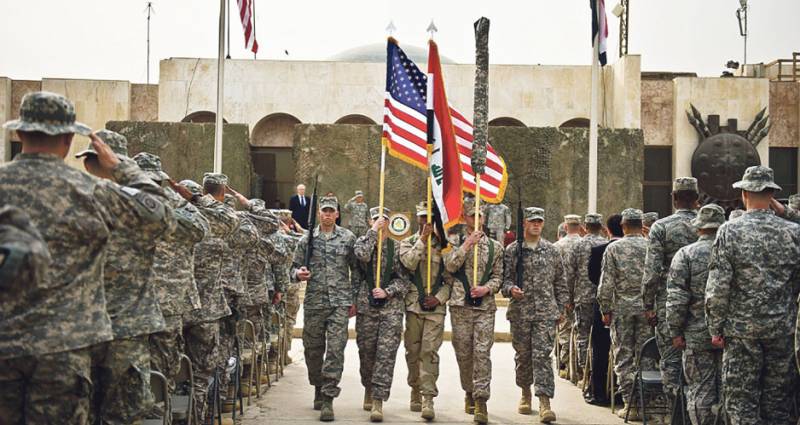 Think, if you like, over two undeniable facts. First, the United States today, on a more or less permanent basis, participates in hostilities not in one distant country, but in at least seven. Second: the vast majority of Americans do not care.

And you cannot say that we don't care because we don’t know anything about these wars. Yes, the authorities are silent about certain aspects of military operations, or announce only those details that they consider convenient for themselves. But information about what the US Armed Forces do and where they do is readily available, even if it has been overshadowed by the flow of presidential tweets in recent months. For those who are interested, here are the press releases issued by the US Central Command in just one recent week.

September 20 (http: //www.centcom.mil/MEDIA/PRESS-RELEASES/Press-Release-View/Article/1 ...): Continued air strikes against IS terrorists in Syria and Iraq;

September 22 (http: //www.centcom.mil/MEDIA/PRESS-RELEASES/Press-Release-View/Article/1 ...): Continued air strikes against IS terrorists in Syria and Iraq;

September 23 (http: //www.centcom.mil/MEDIA/PRESS-RELEASES/Press-Release-View/Article/1 ...): Continued air strikes against IS terrorists in Syria and Iraq;

September 26 (http: //www.centcom.mil/MEDIA/PRESS-RELEASES/Press-Release-View/Article/1 ...): Continued air strikes against IS terrorists in Syria and Iraq.

Since the US began the war on terror, oceans of press releases have been shed. And this is only for seed. To update the various current US military campaigns, generals, admirals, and high-ranking defense officials regularly give testimony to congressional committees or hold press briefings. Almost directly from the battlefield, journalists offer newswhich complement in details something about the losses of the civilian population, for example, that the authorities prefer not to disclose. Authors of editorial articles and “experts” paid for by TV channels and cable news shows, including a bunch of retired military officers, give their analysis. They are followed by books and documentaries that offer a broader view of things.

But what is the matter. None of this makes any difference.

Just like traffic jams or telephone conversations with answering machines, war falls under the category of things that Americans may not welcome, but with which they have become accustomed. In America, the XXI century, war is not something special.

During his tenure as defense minister in 60, Robert McNanamar once once said that the “greatest contribution” of the Vietnam War could be the possibility for the US to “wage war without the need to incite anger in society”. Half a century later, his dreams came true.

Why are Americans today showing so little interest in the wars being fought on their behalf? Why don't we care?
There is no answer to this question.

But I will try. Here are eight different, but each other reinforcing explanations, set out in order from blindingly obvious to more or less speculative.

Americans do not pay attention to the current American wars because:

1. The level of American losses is low. Using their henchman fighters and mercenary contractors, relying heavily on AviationThe managers of the American wars controlled the level of losses. For the whole of 2017, for example, 11 American soldiers died in Afghanistan - about the same as from a gunshot weapons die in Chicago on average per week (https://www.dnainfo.com/chicago/2017-chicago-murders). Meanwhile, in Afghanistan, Iraq and other countries where the United States is participating in hostilities, directly or indirectly, many people are killed and injured, who are not Americans. The number of Iraqi civilians killed this year is estimated at more than 12 thousands of people (https://www.iraqbodycount.org/database/). But these losses for the United States have no political significance. They are not taken into account, since they do not interfere with the conduct of military operations. 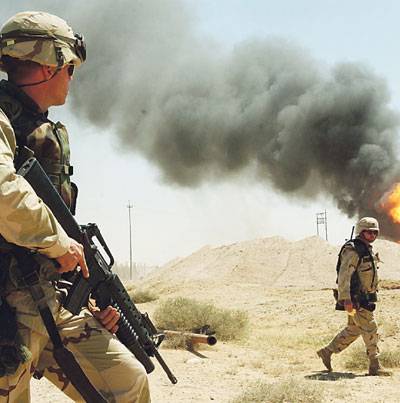 2. Washington’s real costs of war can’t be calculated. In his famous speech, * President Eisenhower said: "Every gun produced, every warship launched, every missile launched, means ultimately a theft from those who are undernourished and hungry, who are freezing and not dressed." The dollars spent on armaments, insisted Eisenhower, directly transferred to unbuilt schools, hospitals, homes, highways and power plants. “This is not at all a way of life in any sense of the word,” he continued. “Humanity is hanging on the iron cross.” For more than six decades, Americans have become accustomed to be on this iron cross. In fact, many see this as a boon, a source of corporate profits, jobs, and, of course, election campaign contributions. Therefore, they avert their eyes from our endless wars. The dollars spent on our conflicts after 11 September will eventually amount to many trillions (http://watson.brown.edu/costsofwar/). Imagine if these amounts were invested in the aging infrastructure (https://www.infrastructurereportcard.org/) of the country. But just do not expect that the leaders of the congress and other politicians will mark such a logical connection.

3. On issues related to the war, American citizens "went into denial." The Americans have already defined their obligation to "support the troops" in the most direct forms, with the understanding that the above support is not connected with any casualties on their part. Members of Congress encourage this civic apathy, while isolating themselves from any responsibility. Practically, citizens and their representatives in Washington agree on one thing: “supporting the troops” means placing the responsibility on the shoulders of the commander-in-chief. But at the same time, the Americans do not ask themselves whether the smallest sense is what the troops are doing. Sipping a beer, we applaud those who wear military uniforms, and chic them on those who refuse to participate in compulsory patriotic rituals. What we do not do is not demand something that even remotely resembles genuine responsibility.

4. Terrorism is fanning more and more. While international terrorism is not a trivial problem (and was not such a decade before 11 September), it was not even close in importance to what might be called an existential threat to the United States. In fact, other threats, such as climate change, pose a significantly greater threat to the well-being of Americans. Are you concerned about the safety risks of your children and grandchildren? So the opioid epidemic is an infinitely greater threat than "Islamic radicalism." But when, under the label “war on terror”, they sell a set of goods necessary to “preserve America’s security”, it is easy to convince ordinary citizens of the need to spread the American armed forces around the Islamic world and to carry out bombings of those who were appointed as villains. Calling it into question is like doubting that God gave the Tablet of the Covenant to Moses.

5. Chatter displaces the essence. When it comes to foreign policy, American public discourse becomes empty, lifeless, and thoughtlessly repetitive. The New York Times William Safire once described American political rhetoric as a BLOG (Brotherhood of the People and Fatherhood of God). And ask any politician - a Republican or a Democrat - about the role of the USA in the world and you will receive the EESPCD (the only SuperHard with the Right to Distribute Freedom and Democracy). Terms such as “leadership” and “irreplaceable” are introduced, as well as warnings about the dangers of “isolationism” and “appeasement” with hints of the “Munich Agreement”. One who has taken such a pretentiously-pompous pose does not need to delve too deeply into the true causes and objectives of the American wars, past or present. There is no need to assess the likelihood of any successful completion of current wars. Fanaticism ousted thought.

6. Besides, we are so busy. Consider this as a corollary of item number 5. Even if there are figures such as William Fulbright ** in the American political arena, who warned about the danger of militarization of American politics, the Americans are unable to perceive them. As it turned out, the answer to the requirements of the Information Age does not contribute to deep reflection. We live in such an era (as we are told), when having an insanely huge number of tasks has become a kind of duty, and an overloaded schedule is a duty. The range of our attention narrows, and with it the time horizon. The problems that we solve arose just a few hours or minutes ago. And forgotten later the same time. They will be overshadowed by others who immediately and completely absorb our attention. As a result, fewer and fewer Americans — those who do not ransack on Facebook or Twitter — have the time or inclination to ask such questions: “When will the war in Afghanistan end?”, “Why does it last 16 years?”, “Why” are the best in stories Armed forces "can not win?", "Is it possible to pack a serious answer to a serious question in 140 characters or 30 television seconds?". Not enough 140 characters and 30 TV seconds? Then you are stupid. Well, slow-witted, then do not expect that someone will pay attention to what you say.

7. And in general, the next president will save us. At regular intervals, Americans indulge that if we put the right person in the White House, everything will be fine. Ambitious politicians quickly respond to these expectations.
Presidential candidates are struggling to stand out from their competitors, but all of them in one way or another offer to dump the burden of old mistakes - Make America Great Again. And the presidents are not gods at all, but vicious mortals. They ignore the country's historical track record and its promises - just that data and already broken. And Americans - above all journalists - pretend to take it all seriously. Election campaigns are becoming longer, more expensive and less meaningful. One would think that the election of Donald Trump would lower the expectations that the presidents would correct everything. Instead, especially in the antitump camp, the desire to get rid of Trump himself (Collusion! Corruption! Obstruction of justice! Impeachment!) Has become a unifying imperative. No one cares about restoring the balance of power, which the founding fathers once cared about. The bitter irony is that once Trump criticized the endless wars, and now he completely gave them to the generals, who have no idea how to stop these wars.

8. Our "cultural and progressive" armed forces received immunity from criticism. Back in 90, the US military establishment belonged to degenerates. Who can forget all this controversy about gays in the military during the time of Bill Clinton? Everything is long over. In a "cultural" respect, the armed forces moved to the left. Today, the US Armed Forces are climbing out of their skin to tighten the mask of tolerance and devotion to the ideas of equality in matters of race, sex and sex. Therefore, when President Trump announced with Tweete his disagreement with the presence of transgender people in the army, the leaders of the types and branches of the armed forces politely but firmly disagreed with their Supreme Commander. The military’s willingness to “absorb diversity” helps them isolate themselves from criticism. Simply put, those critics who previously could have crucified the military for their inability to bring current wars to a successful conclusion simply do not “open fire”. The release of female cadets from the rangers school or the admission of women to the management of martial operations compensates for the inability of the armed forces to win.

Collective indifference to war has become the emblem of modern America. But do not expect your neighbor or the editors of the New York Times to lose sleep because of this. Indeed, even in order to notice this indifference, it is required that they - and we - should not be indifferent.

Ctrl Enter
Noticed oshЫbku Highlight text and press. Ctrl + Enter
We are
A great interview with Sergey Lavrov: about Ukraine, Obama and IranWhat you didn't want to know about England
7 comments
Information
Dear reader, to leave comments on the publication, you must to register.