October 20 2017
27
Beginning with the opposition rally 17 of October near the walls of the Verkhovna Rada Maidan is called “Saakashvili’s Maidan”, “Mihomuidan” and “Kozlin Maidan”, because its heroes carried the slogan “Let's take the goats!” , and now the "Euro-goats" were divided into the first-second, some were left without power, others in power, like goats in the garden. Therefore, the people of Kiev, who gained the Maidan experience, are not inclined to participate in what is happening, because they are not goats. 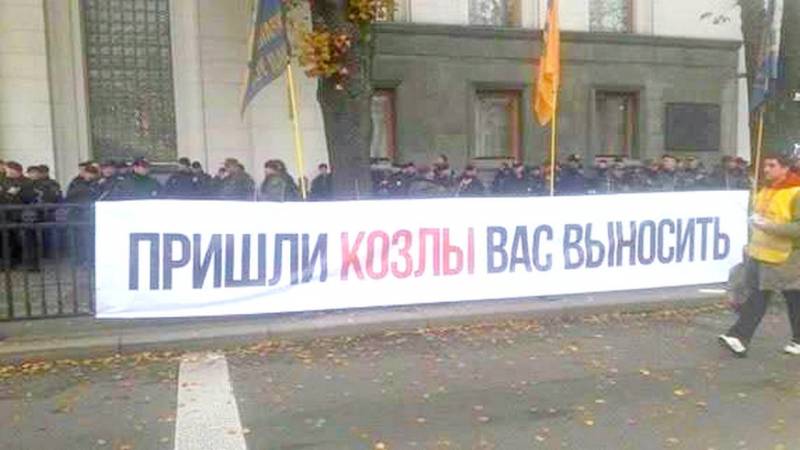 Independence political analysts do not want to recognize what had begun with Maidan, because for them it is a great symbol, the will of the people, and here ... Georgian ex-President Saakashvili with goats ... 90's failure in education affects this, otherwise they would know the great words of Leo Tolstoy: patriotism - this is the last refuge of the goats! (Slightly paraphrasing.)

However, the role of Saakashvili in this Maidan is somewhat exaggerated. His breakthrough to Ukraine through Poland, straight from America, unequivocally tells everyone that the blessing of some goats in America for this Maidan to remove the presumptuous “goat-huckster” from the government has been received. Therefore, he was recognized by all the goats in Ukraine and gave him the first word, so President Poroshenko, although he received the nickname “huckster”, is afraid to use force on him, like Yanukovych at the time to Euromaidan, and calls Goat Maidan democracy, allegedly began to demand it .

All the goats who joined Saakashvili view him as a symbolic ram, and he willingly agrees to be used as such. “We will consult on what to do next,” Saakashvili repeats from the moment he arrived in Lviv to Mayor Sadovyi. Who does Saakashvili advise? Probably with Tymoshenko, Nalyvaychenko, Sadovy, Tajik journalist Nayem and others, and by telephone in English with goats from Washington and, possibly, from Warsaw, from where he arrived directly to Lviv.

Independence political analysts wonder how quickly and dexterously goat maydanshchiki act, with a relatively small number of them, although the otgadka in sight, in the form of the commandant of Maidan Semyon Semenchenko, who walks with tents and tents among the household supplies. This is his battalion "Donbass" arrived under the walls of the Rada, and settles its positions.

Kiev political analyst Mikhail Pogrebinsky appreciated the first successes of Kozlino Maidan: “Everything looks like a special operation, the game has begun. The matter will not stop there, there will be an increase in demands. ” And we already know to what requirement: “We will take out the goat!”

The position of the power goat looks hopeless. All the shock forces of Euromaidan against him, from the demagogue Nayem to the centurion Parasyuk and Nadia Savchenko. And financial too: from Kolomoisky to Firtash. The problem Poroshenko that he could not create his "Praetorian Guard", I thought everything you need for power, you can just buy. In fact, for Poroshenko only the radical homosexual Lyashko, and some people's deputies, tear the throat. Poroshenko also relies on the police, but she is supervised by the super minister Avakov. Therefore, no coincidence is surprising: Semenchenko with the whole battalion broke under the Rada as easily as Saakashvili across the Polish border into Ukraine.

The Azov battalion of Avakov-Biletsky is not particularly active yet, allegedly because of the Saakashvili figure, perhaps the old dislike of the Azov sponsor Arsen Avakov and Saakashvili is having an effect. “Azov” and the Avakov police are neutral on the whole, but “Azov” is shared by the requirements of Kozlinogo Maidan, and such neutrality is already a disaster for Poroshenko.

The “Right Sector” is completely on the side of Kozlinogo Maidan, led by Semyon Semenchenko and the Mayor of Lviv, Sadov. This means that he has a reliable rear in Western Ukraine, and his former leader Dmitro Yarosh understands this well. Apparently, that is why he fell ill, between the commander-in-chief of Poroshenko and his tsereushnym curator Nalyvaychenko. For whom Yarosh is sick, for that he will recover. And hardly for Poroshenko, it is very opportunely ill.

In general, the intrigue of this Maidan: who will be its vanguard, "Right Sector" or "Azov"? Nazis "Western" or Nazis "Eastern"? Without a clear answer, so far the main question is: why is it that the goat is “taken out”? Really for corruption? She was, is and will be, the mafia - is immortal! Corruption is only an excuse, Poroshenko is being demolished, apparently because he did not start a war with Russia, did not even seize the Donbass. These accusations are expressed to him by Semenchenko, and Biletsky, and Yarosh and Nadya Savchenko. The State Department and Kurt Volker are silent about this, but Saakashvili speaks about his breakthrough across the border and his biography of the South Ossetian war with Russia. Therefore, Poroshenko is not the “Führer of the Nation,” no matter how he speaks Russophobia, but a goat for real Nazis!

By the way, this was also said by the pastor of the National Security and Defense Council Turchinov right in the Rada, when he suddenly demanded Poroshenko to issue a decree on entering the Armed Forces of Ukraine to the Donbass, that is, he demanded war, and immediately! In fact, Kozlinsky Maidan, his obvious and secret supporters, give Poroshenko an ultimatum: either a declaration of war to the Donbas, in the long run, to Russia, or they will “carry the goat”. Although the war will only be a delay Poroshenko until the first defeat.

There are secret scenarios. Washington would like to preserve the continuity of its puppets in Ukraine, that is, I would like to gently displace Poroshenko, with a quasi-legitimate surrender of power to the next acting president. To convince Poroshenko to quit in a good way, so as not to quit on the bad, it seems that Zlatoust Maidan Mustafa Nayem is charged. Poroshenko agreed to meet with Nayem. The first audience failed, but it is important that the president agreed to meet. Why Hire? For some reason, Pogrebinsky calls Hiren Leshchenko “the faction of the US Embassy in the Rada”.

Will the soft ending of this Maidan succeed? Poroshenko does not believe and is afraid: deceived. He knows all the goats well, they will always be afraid that he will write memoirs. Yanukovych was lucky, but Poroshenko has no place to wait for luck. He has a ghostly chance to successfully surrender, but not to Goat Maidan, but to Washington. Will his capitulation in Washington? Not a fact, but he has no other options ...

Ctrl Enter
Noticed oshЫbku Highlight text and press. Ctrl + Enter
We are
Reports from the militia of New Russia for 27-28 September 2014 of the yearResults of the week. "Well, do not change me because of every idiot!"
Military Reviewin Yandex News
Military Reviewin Google News
27 comments
Information
Dear reader, to leave comments on the publication, you must to register.