October 19 2017
29
The Russian national team performs at the third WorldSkills championship of professional skill. The prestigious tournament, identifying the best professionals in their field, is being held this year in Abu Dhabi. One of the stages of the main tournament includes the so-called presentation competitions, which were made by members of the Russian national team aged from 14 to 16 years. 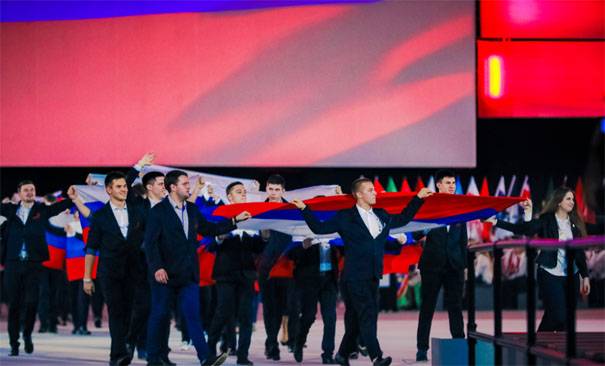 The Russians note a significantly higher complexity of the tasks of the world championship in comparison with the domestic tournament, as well as the WorldSkills tournament of the European level.

The names of our winners are:
Daria Fradkina (St. Petersburg) - 1-place in the competence of "Graphic Design".

Sophia Gorpenko and Roman Magonov (Republic of Tatarstan) - 1-place in the competence of "Mobile Robotics".

Maxim Alzhanov and Daniil Kalinin (Chelyabinsk) - 1-place in the competence of "Electrical work."

In total, more than 1,3 thousand applicants from 77 countries take part in the tournament.

Today will be the closing ceremony of the WorldSkills World Professional Skills Championship. In 2019, the tournament will take Kazan.

Ctrl Enter
Noticed a mistake Highlight text and press. Ctrl + Enter
We are
More than hockey: about baiting the Russian national teamThe victory of Russian hockey players celebrates the whole country
29 comments
Information
Dear reader, to leave comments on the publication, you must to register.