In St. Petersburg, to replace the "Meteora" will come "Griffins"

October 19 2017
40
In St. Petersburg, will begin to run the newest Russian catamaran "Griffin", reports Polyexpert with reference to the press service of the company-developer of the Sredne-Nevsky shipbuilding plant (included in OSK). 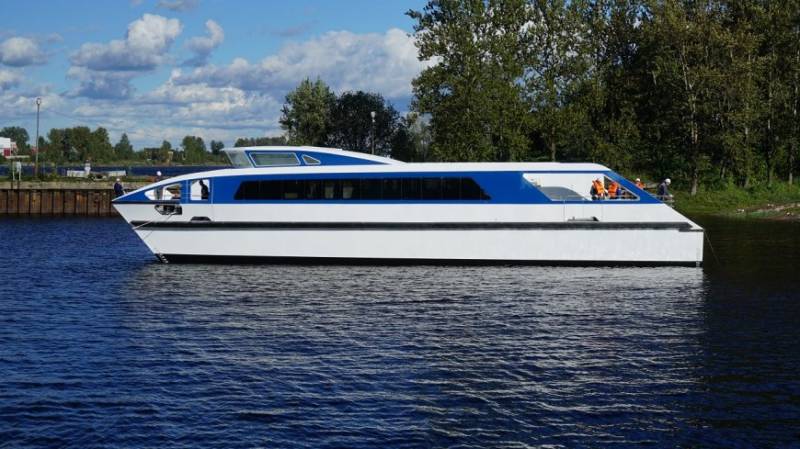 “The 23290 project" Griffin "is a modern ship, which has no analogues in Russia. The new catamaran will be involved in transportation on the Neva. Due to the low superstructure of the “Griffin” hull, it passes under low Petersburg bridges without any problems, ”the message says.

The presentation of the vessel will take place within the framework of the III International Passenger Forum “SmartTransport”, held in St. Petersburg. The catamaran will replace the legendary "Meteora".

According to the developers, "a feature of this vessel is the manufacture of the hull from modern composite materials, which significantly reduces its weight without loss of strength properties." It "is intended for transporting passengers along major rivers, as well as in the near sea zone."

It is noted that due to the design decisions, the ship can move even in the 4-point storm without loss of speed.

The Griffon is capable of transporting 150 people a distance of up to 1000 km without refueling, which makes it possible to use it virtually throughout Russia.

The state is actively engaged in expanding transport infrastructure, and the development of a modern catamaran will positively affect the emergence of a full-fledged river fleetconcludes edition.

Ctrl Enter
Noticed a mistake Highlight text and press. Ctrl + Enter
We are
"Alexander Obukhov": the first ship of a large seriesChina expands its amphibious capabilities
40 comments
Information
Dear reader, to leave comments on the publication, you must to register.