October 20 2017
18
On Monday, the UN General Assembly elected Ukraine as a member of the UN Human Rights Council (HRC) for the period 2018-2020. It happened in the framework of the rotation of the members of the Council. At this time, the 15 states, whose powers in the UNHRC expire on December 31, are to be replaced. News hurried to comment on the representatives of the Ukrainian authorities. Deputy Minister of Foreign Affairs of Ukraine Sergey Kyslitsa was pleased in his Twitter microblog: “Another platform in which Ukraine will defend human rights in the world and in the occupied territories of Crimea and Donbass in particular.” 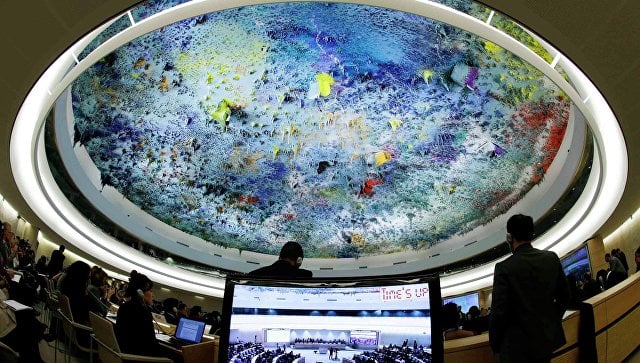 What did the UN report on the situation in Ukraine show?

With particular pleasure, the Ukrainian media noted that at the General Assembly last fall, Russia could not be re-elected to the UN HRC, although it had the right to do so. During the vote, she ceded (112 votes against 114) to Croatia her seat on the Council. In Kiev, they explain that the world reacted in this way to the “Russian aggression against Ukraine”.

In fact, last year’s failure of Russian diplomacy is directly related to our participation in the liberation of Syria from terrorists. The irritation of the Americans with the success of the Russian Aerospace Forces was transmitted to the assistant coalition of the Western coalition. More than 80 human rights and humanitarian organizations (completely familiar names - Human Rights Watch, Care International, etc.) turned to the General Assembly, who signed a petition demanding that Russia not be elected to the UN Human Rights Council because of its actions in Syria.

The Russian Foreign Ministry responded to this petition with a tweet from its official representative, calling the position of human rights activists "hypocritical and dishonest." There was also an explanation that the struggle of Russia against terrorists directly concerns the protection of human rights. Probably, in order to win over to himself and his argument the journalists accredited with the department, the official representative of the Ministry of Foreign Affairs even danced to the participants of the Kalinka press tour.

All these foreign minded efforts have not outweighed the serious backstage work of Western opponents. As a result, Russia lost the UNHCR election, and Ukraine is now self-confidently taking credit for last year’s failure of Russian diplomacy. Ukrainians can understand. In the confrontation with Russia, they feel the obvious support of the West.

Not without it, and when Ukraine was elected to the UNHRC. Otherwise, it is difficult to explain why the protection of human rights throughout the world has been entrusted to a country torn by a burning civil conflict and shamelessly violating these very rights. There is no need to go far for examples. Just look at the documents of the UN itself.

Last year, the United Nations High Commissioner for Human Rights published a report on the human rights situation in Ukraine. He came out incomplete. Ivan Shimonovich, Assistant Secretary-General of the United Nations for Human Rights in the British The Times, complained that the Ukrainian authorities simply did not allow the inspection that prepared the report to enter the five secret prisons of the SBU.

However, even what the UN specialists were able to see caused a real shock. It can be felt without figures and facts only under the title of one of the sections of the report “Extrajudicial executions, enforced disappearances, illegal and arbitrary detentions, torture and cruel treatment”. That's what it was.

“An unofficial detention network was established, where they illegally detained without issuing relevant documents, access to a lawyer and communication with relatives of dozens of people,” UN inspectors noted. This happened both in the basement of the SBU and in the administrative buildings. In Slavyansk, for example, the basement of a local college was used. This phenomenon was quite massive. Human rights activists believe that approximately one-fifth of all prisoners were in custody without any formalization of charges.

People were beaten and tortured. Statements about this came from almost two thousand people. True, the local prosecutor's office (hand washes his hand) left most of them without consequences and opened up only five hundred criminal cases. But even they testify to the arbitrariness of the Kiev authorities and the obvious violation of human rights in Ukraine.

The report gives a lot of real cases. In particular, made public история 74-year-old resident of the village Shchurovo Donetsk region. Employees of the SBU detained her in their own home. The old woman was beaten and tortured to learn about her son. Then they accused of terrorism and arrested. The UN mission found a poor woman in the Mariupol SIZO.

She was lucky. She survived. Others are not. UN inspectors found 1000 unidentified corpses in Ukrainian morgues. It is assumed that among them are those who could not stand the torture and conditions of detention. It makes no sense to repeat all the numerous facts. The examples already cited from the UN report paint a sad picture of the situation of people in Ukraine. It changes little.

This August, the UN mission familiarized itself with the attitude of the Ukrainian authorities towards refugees and internally displaced persons. The topic is different, but the attitude towards people is similar. They spend hours at the checkpoints, left without food, water and medical care. About half a million Donetsk residents are deprived of the opportunity to receive legally earned pensions, etc.

These are the findings of UN experts. But how the situation is assessed by the Ukrainians themselves. A survey conducted by the Democratic Initiatives Foundation showed that only 4 percent of Ukrainian citizens believe that the situation with ensuring human rights and freedoms in the country has improved since Euromaidan. 35 percent of respondents state a sharp deterioration. In the Donbas, this estimate is even worse. 60% of respondents in the region noted negative trends in respect for human rights.

In the wake of political speculation

The human rights situation has always been a matter of political speculation. With their help, they ruined the reputation of states and exalted their own worthlessness. In recent years, the situation has only worsened. Experts attribute this to the appointment of Jordanian Prince Zeid al-Hussein to the post of UN High Commissioner for Human Rights.

Previously, Al-Hussein headed the Jordanian mission to the UN. He managed to work as ambassador of Jordan to the USA. In the 2006 year, at the age of 42, he was a candidate for the post of UN Secretary-General, but then the choice was made in favor of the Foreign Minister of the Republic of Korea, Ban Ki-moon. Only in 2014, the Jordanian prince was able to occupy a high and fairly independent (by status the High Commissioner is also the chairman of the HRC) a post in the UN structure.

Immediately after his appointment, Zeid al-Hussein noted that he had become "the first high commissioner from Asia and from the Muslim and Arab world." Al-Hussein took his appointment as “the determination of the international community to strive for ensuring human rights in this part of the world.” The words were said about the fight against terrorism, the protection of "religious and ethnic groups, children threatened with forced recruitment and sexual violence, and women who are subject to severe restrictions."

The world connected the last passage of the new appointees with the Islamic State Islamic Group (ISIL), banned in Russia, but the Jordanian prince turned to 180 degrees and turned his gaze to the disliked Arab state of Israel, adding to the dozens of anti-Israeli resolutions.

About "Islamic State" al-Hussein somehow forgot. But he became interested in denouncing the Syrian President and his policies. He condemned Bashar al-Assad for "chemical attacks of the civilian population", "barbaric bombardments" and other "crimes" committed in fact by the aforementioned ISIL.

During the battle for Aleppo, Commissioner Al-Hussein once again accused the Syrian government of war crimes and promised to transfer the case to the International Criminal Court. However, this position did not surprise anyone, since the native Jordan was part of the Western coalition, which sought to retain control over the largest city of Syria.

It got, of course, and VKS of Russia. Even now, when the war against terrorists in Syria is nearing its logical end, the Jordanian prince does not abandon attempts to discredit the army of al-Assad and his allies. At the end of September, the next resolution on Syria was adopted at the 36 session of the UN Human Rights Council.

“It, in particular, says that (I quote from RIA Novosti) that“ foreign fighters-terrorists and foreign organizations ”are fighting on the side of Damascus, and the Syrian authorities are committing war crimes, as well as actions that can be regarded as crimes against humanity ".

The resolution contains a direct accusation of the Syrian air force of using sarin in the Khan-Sheikhun. The HRO demands to provide her with immediate, full and unhindered access to the entire territory of the Syrian Arab Republic. With this initiative, the member countries of the Council included in the Western coalition.

As we see, there is a biased attitude towards the conflict in Syria of the UN High Commissioner for Human Rights Zeid al-Hussein and his subordinate structures. In this regard, it is not surprising that the tough reports of bona fide UN inspectors on the violation of human rights in Ukraine remained without any consequences.

Moreover, during the formation of the new composition of the HRC, these violations were left outside the discussion of the candidature of the Ukrainian state. So another “peacemaker” appeared, but the world is unlikely to get any better from this ...

Ctrl Enter
Noticed a mistake Highlight text and press. Ctrl + Enter
We are
Reports from the militia of New Russia for 27-28 September 2014 of the yearResults of the week. "Well, do not change me because of every idiot!"
18 comments
Information
Dear reader, to leave comments on the publication, you must to register.