"They worshiped the bull!" The most developed Mediterranean civilization of the Bronze Age (part two)

October 24 2017
78
Last time, we only slightly came into contact with the ancient Minoan civilization. Today we will look at it in more detail and, of course, we will start with chronology, which was proposed by Arthur Evans at the beginning of the 20th century, and then repeatedly specified. In his opinion, there were early, middle and late Minoan periods (the latter already coincided in time with the Mycenaean civilization on the mainland). Alternative chronology of the Minoan stories It was proposed by the Greek archaeologist N. Plato, who divided the history of the Minoan civilization into ... "palace periods." 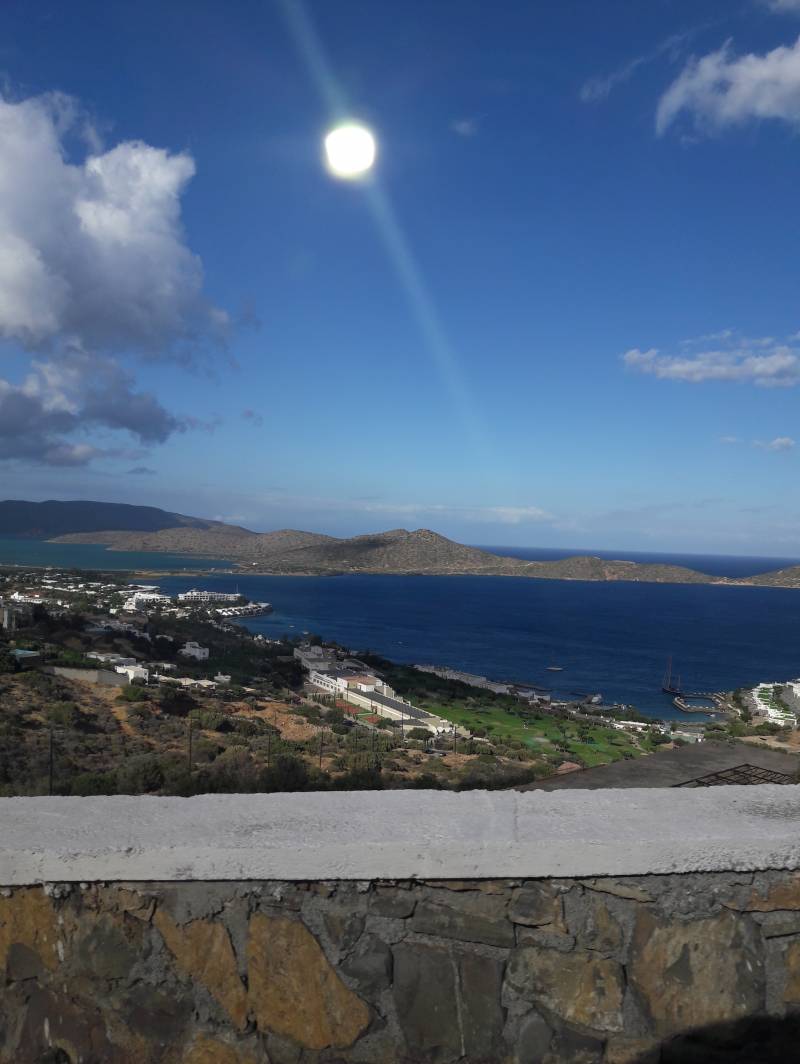 The Sun rises over Crete, and we continue our story about his ancient Minoan civilization ...

Modern map of the island.

The ancient people's labor tools found in Crete suggest that more than 130 thousands of years ago, Neanderthals arrived here by sea (on boats or rafts, most likely). Then, in the era of the early Neolithic, people reappear here and they are engaged in carving dwellings in the rocks, which are later used as tombs. Many such rocky caves are still today can be seen near the city of Matala. 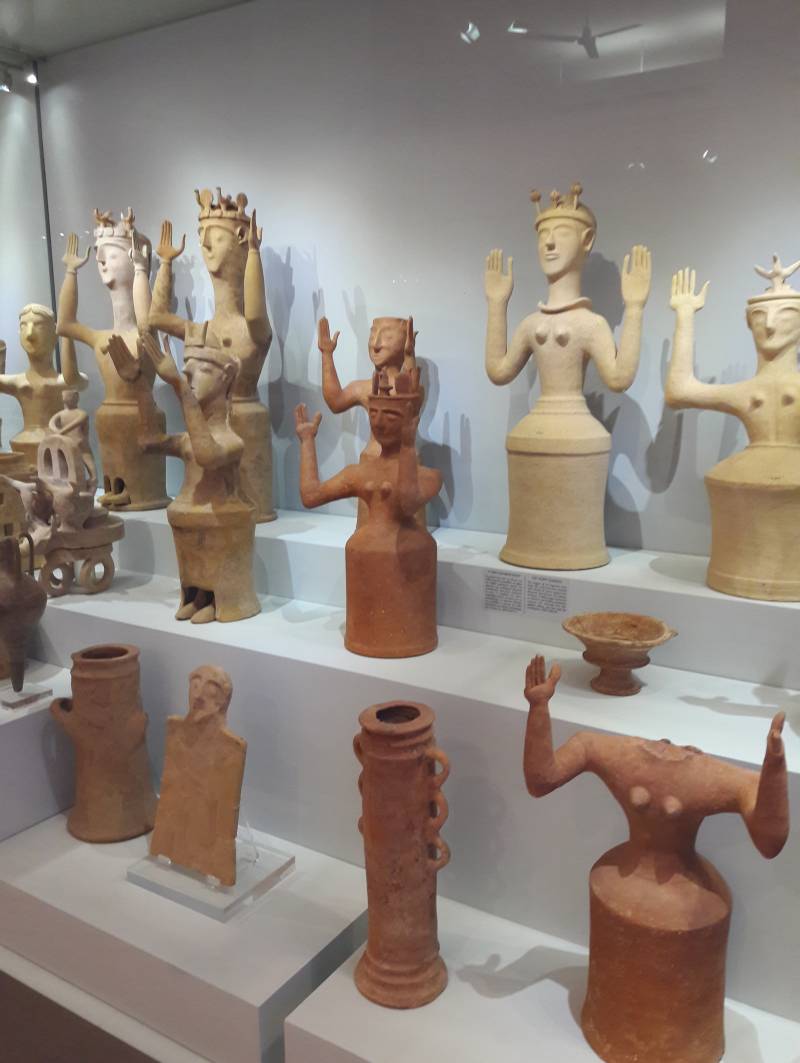 But where, then, did the Cretans come from, if people did not live on the island until the Neolithic era? Experts note that the iconic images of the bull and the goddess “Oranta” (female figure with raised arms) were known in the east of Anatolia during the time of the ceramic Neolithic. In the IV th. BC. er cylindrical seals appeared in Arslantep, very similar to those that existed among the Minoans, and in the 3rd millennium BC. er a palace was built in Beyzesultan, the architectural features of which have a certain similarity to the Cretan palaces built later. 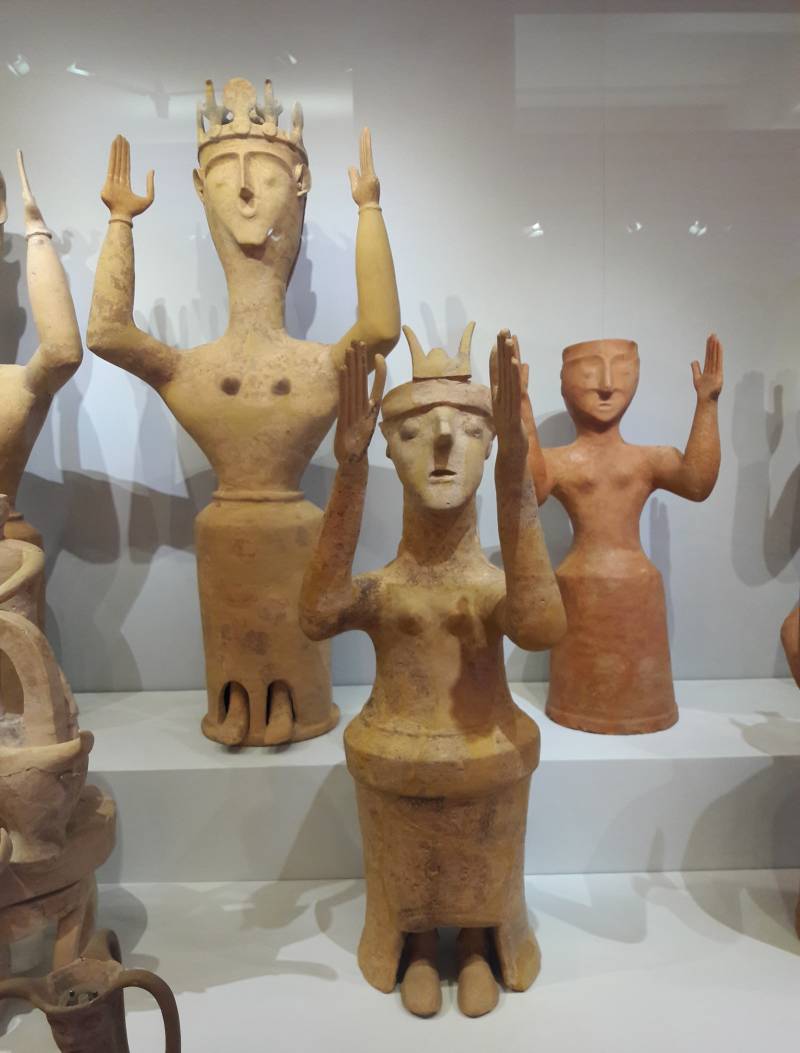 There is an opinion that the Minoan culture was created by the descendants of the Khalaf culture, and that in turn continued the traditions of the ancient Neolithic proto-towns of Anatolia, such as Chatal-Huyuk (about which there was a large article here), whose inhabitants, following the onslaught of the ancestors of the Sumerians ), moved to the West, and then completely moved to the island of Crete. From the Khalaf culture, they adopted the iconic labrys and stamps from steatite. True, there is one ambiguity. Khalaf culture had no navigation skills. It was a purely continental culture. 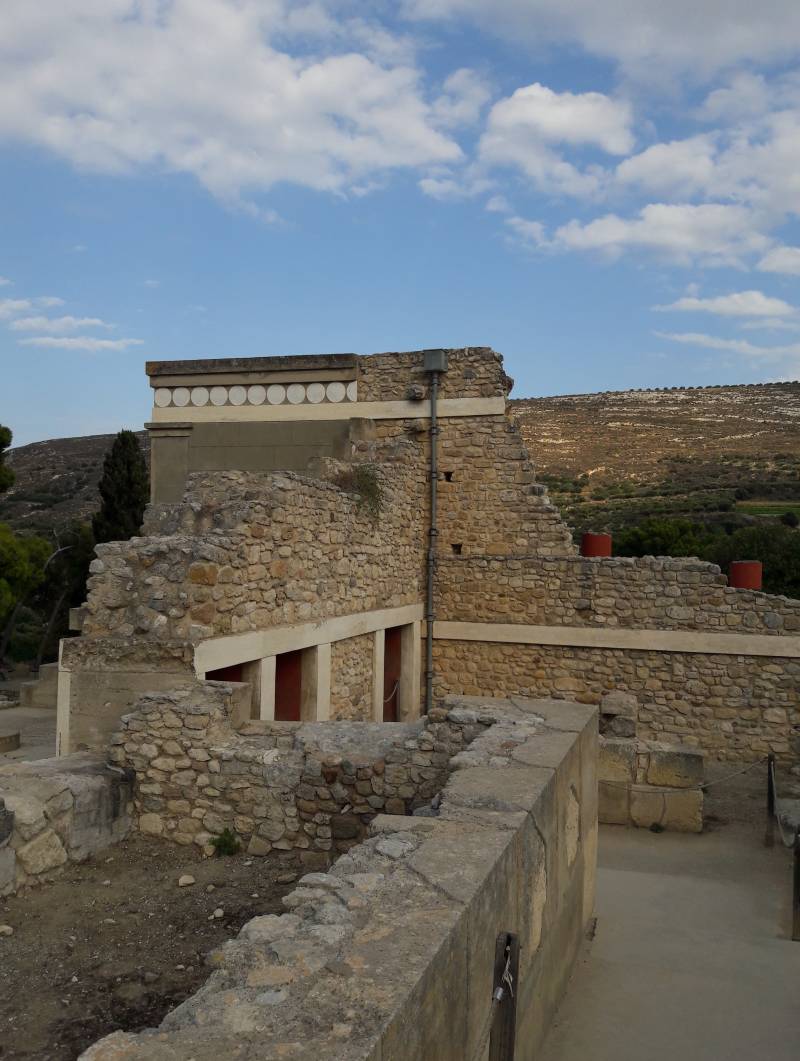 We continue to inspect the Palace of Knossos and - obviously, what a huge structure it was. Today, only a small part of it has been restored, but it also makes a very impressive impression.

Culture is developing rapidly. The most ancient Cretan hieroglyphic "Arkhanesk letter" appears. The tradition of stamping seals on clay arises and is widely spread, and there are no hieroglyphs on many prints. That is, not everyone was literate, but property relations “mine is mine, and yours is yours” have already developed. It is possible that this tradition was originally of Middle Eastern origin, but it could come to Crete from the territory of mainland Greece, where similar seals were already used. 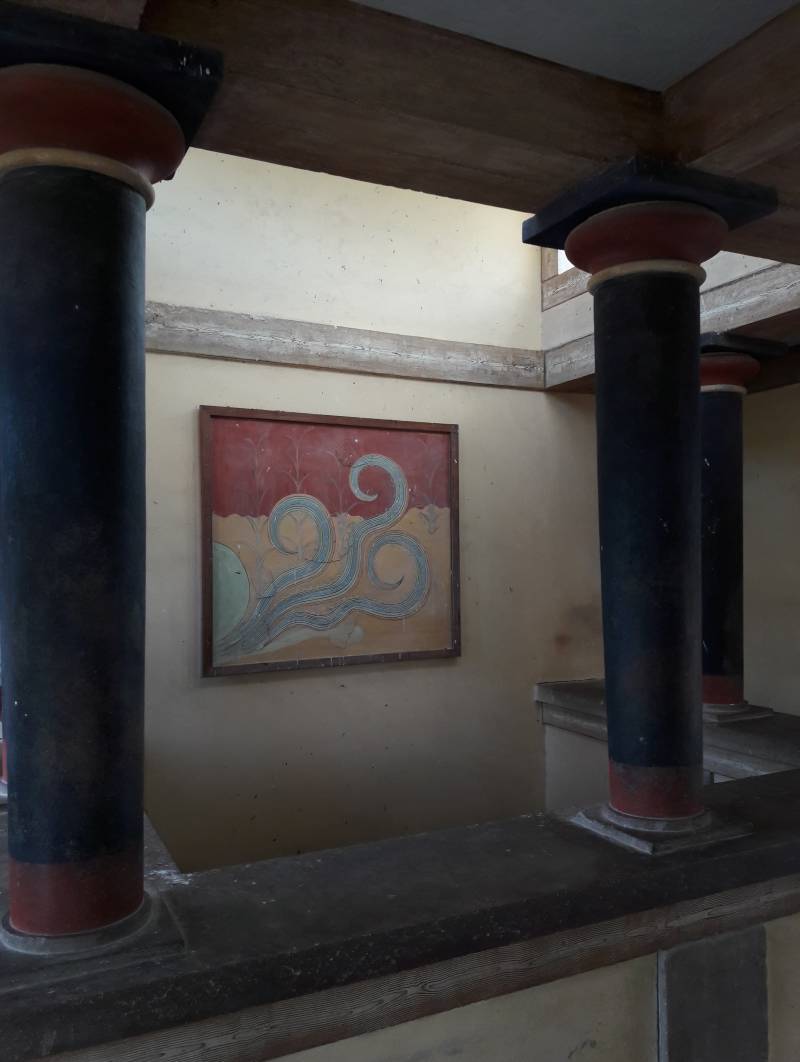 In some rooms the frescoes are preserved, but of course, they are not able to convey the magnificence and the riot of colors that was here once upon a time.

The inhabitants of the island begin to build the first palaces. Moreover, construction is underway in the central and eastern parts of the island, while in the west people still cling to the old traditions. Arkhanesky hieroglyphs (that is, from Arhaness) begin to gradually spread to the southern and eastern regions. 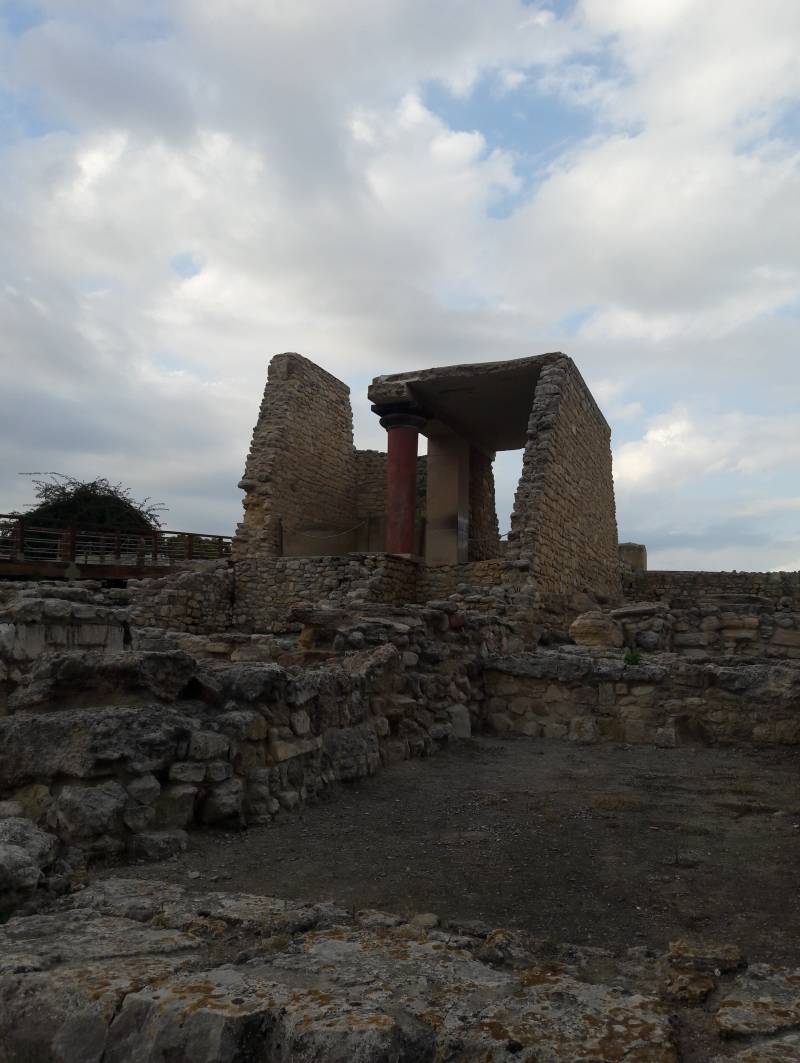 Apparently, the conquerors of the island, the Achaeans, were so suppressed by the grandeur of the Palace of Knossos that they did not destroy it, but simply adapted it to their needs.

In 1700, something is happening in Crete, and the old palaces are destroyed, and new ones are being built in their place. In the southern part of the island (Fest), “Linear A” appears, but it displaces hieroglyphic writing not immediately, but about a century and a half later. With the disappearance of hieroglyphic writing, carved seals, however, do not go out of use, although there are no texts on them. At the same time, their iconography becomes very complex and even fanciful, as if the owners of these seals are trying to praise each other in this way. 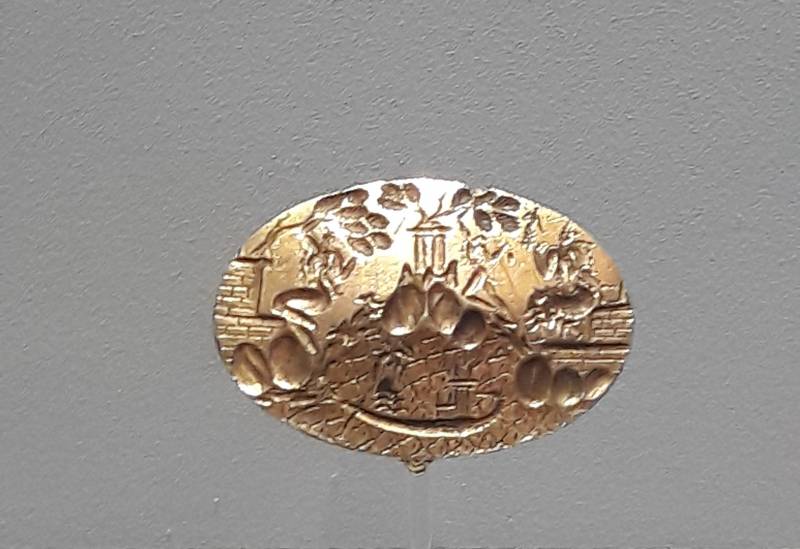 Here is one of these frilly seals. (Heraklion Archaeological Museum, Crete)

At the same time, there are also cylindrical seals on Crete, very similar to those used by the people of Mesopotamia. 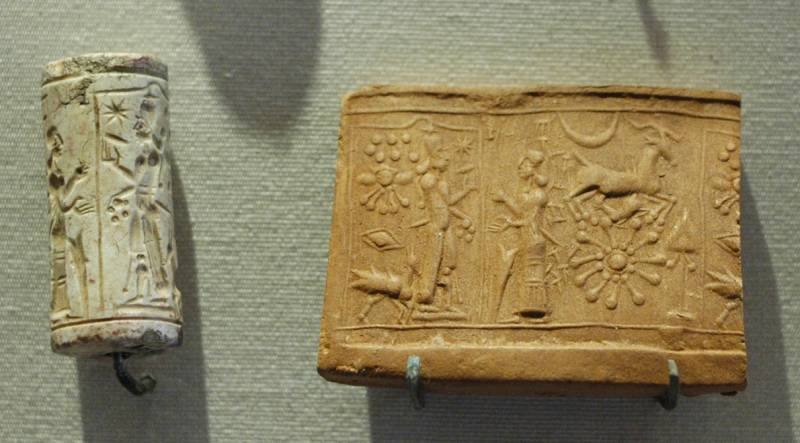 Assyrian cylindrical seal made of limestone and a plaster cast made from it depicting the worship of the god Shamash. (Louvre)

At the same time, the Minoan civilization is dealt a very strong blow by a monstrous natural cataclysm - an explosion of a volcano (which happened between 1628 and 1500 BC) on Fira Island (today Santorini Island), which resulted in a very strong earthquake, and then the same catastrophic tsunami, not to mention the layer of ash that covered fertile land. It is possible that the death of this island was the basis for the myth of the death of Atlantis. 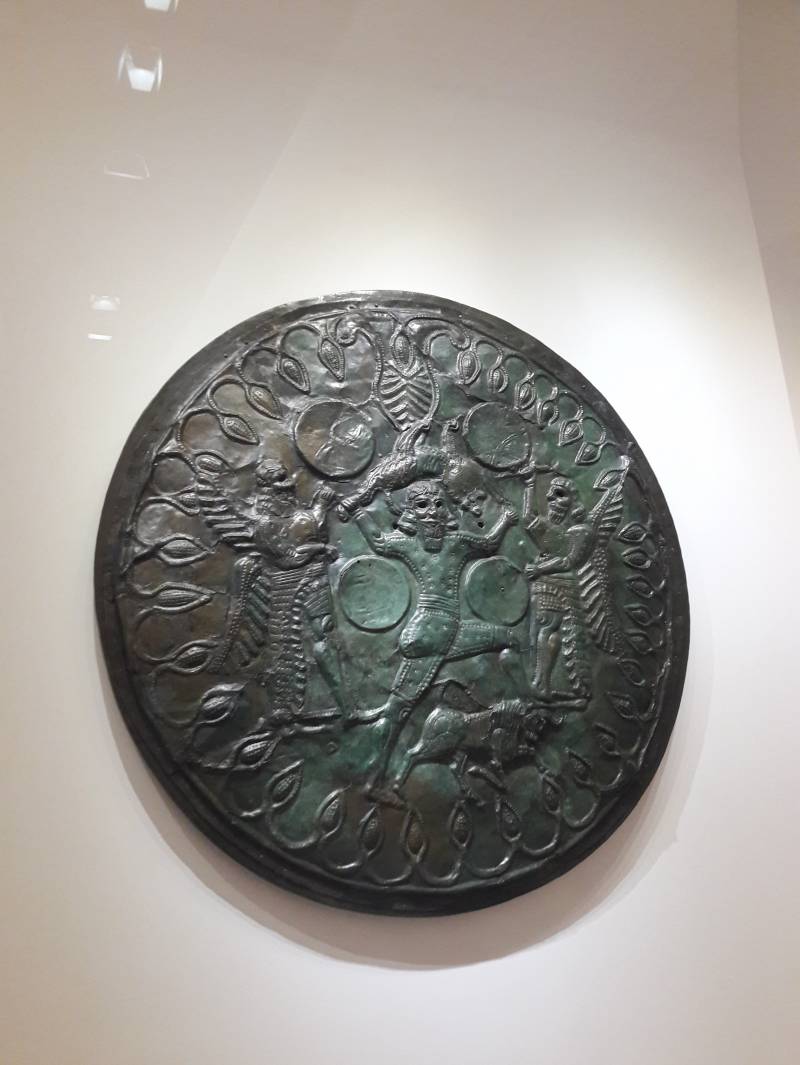 Another Mesopotamian find on the island of Crete: a plaque with the image of the Sumerian winged deities and armed with the club of Gilgamesh. (Heraklion Archaeological Museum, Crete)

It was previously believed that this eruption led to the total destruction of the Minoan civilization, but archaeological finds in Crete proved that this was not the case, and despite the blow received, the Minoan civilization still survived and existed for at least 100 years. It proves this layer of volcanic ash is already under a number of buildings from this period.

However, this catastrophe led to the decentralization of power in Crete, and each of the Cretan cities turned into an independent political center. It is interesting that when the Egyptian sources of this period speak of "Keftiu" (that is, the Cretans), they do not mention the rulers of this island, although the rulers of other regions are mentioned in them repeatedly. 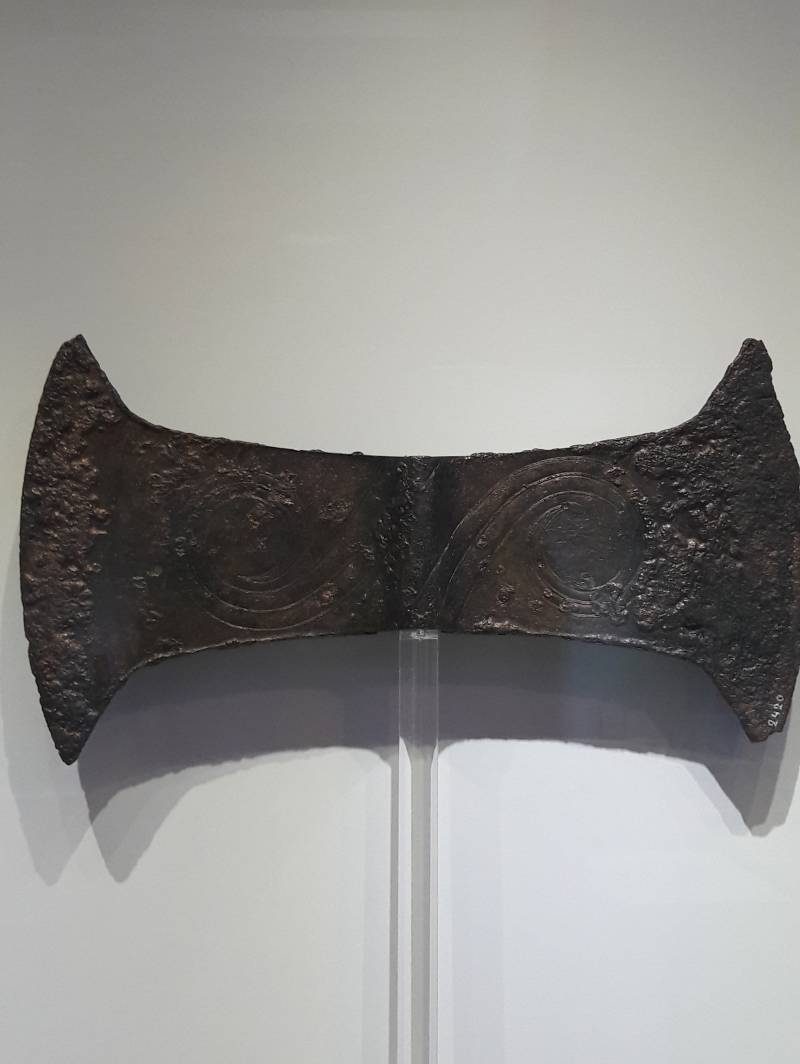 Around 1450 BC. Many of the island’s palaces died in the flames of the fires. And most of them were not restored, although the palace at Knossos was not damaged. What was the cause of these fires? The invasion of the Achaeans? For example, Homer among the non-indigenous population of the island calls the Pelasgians, but it is unclear how they got to the island: together with the Achaeans or the profits themselves. It is important that the nature of the burials changes, which means that one culture is being assimilated by another and this new culture comes from mainland Greece. 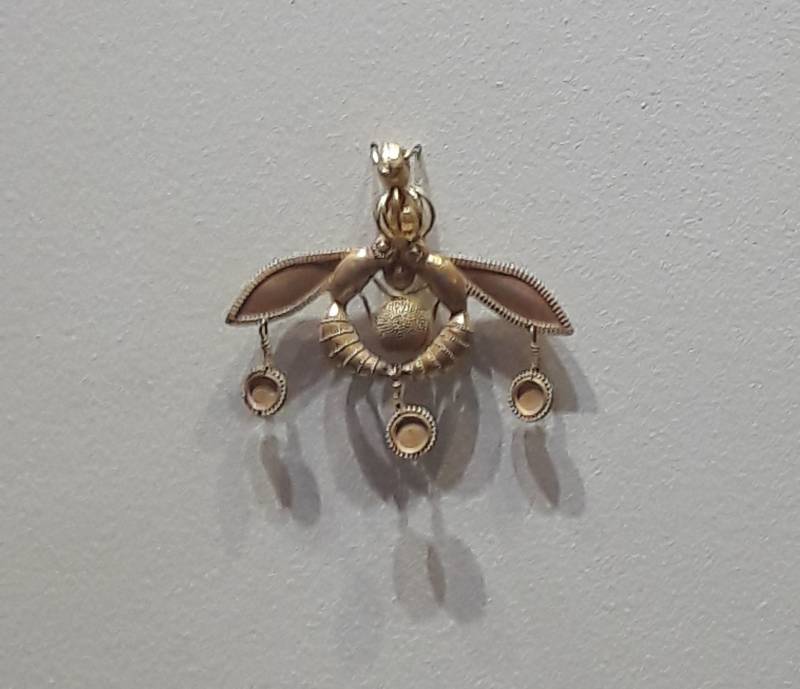 The Minoans were jewelry makers. Here is this suspension, for example - well, isn't it perfection itself? (Heraklion Archaeological Museum, Crete) 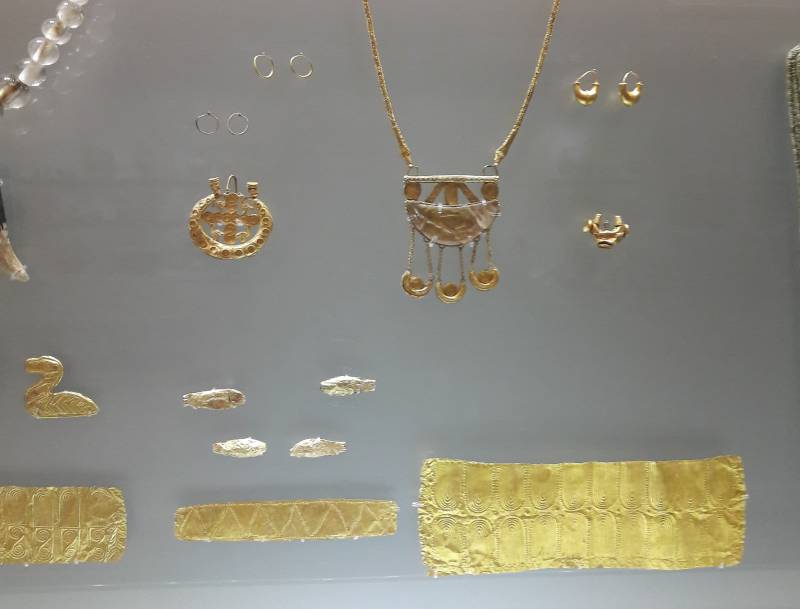 At the same time, along with the destruction of the palaces, the “Linear A” also disappears for some reason. And the paradox is that it was the fires that destroyed these palaces that simultaneously burned clay tablets, and thus kept this letter to our time. But then, with the Achaeans, “Linear B” appears, and the government is finally centralized. By the way, the same Minos - whose name this civilization is named - according to Greek mythology was by no means a Minoan, but ... a Greek! 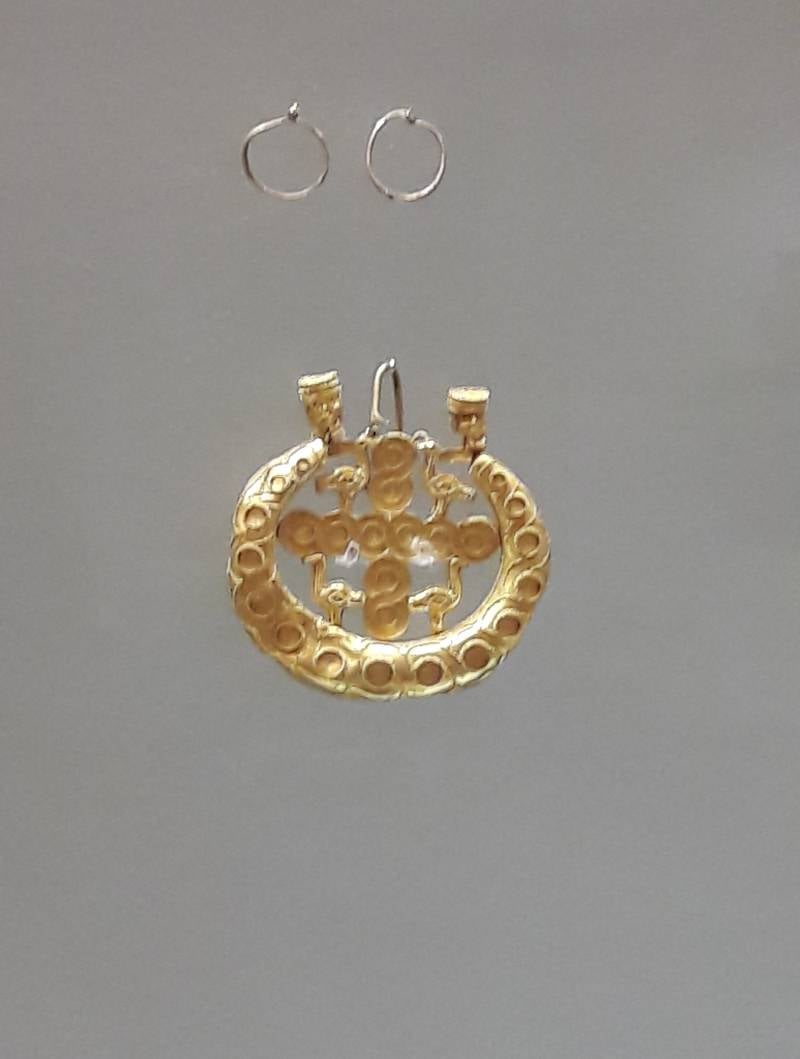 "Earring with birds" was in the past and inlaid with precious stones! (Heraklion Archaeological Museum, Crete)

At the same time, many achievements of the Minoans extend to mainland Greece, that is, we can talk about both conquest and interpenetration of island and mainland cultures.

Most scholars are inclined to believe that Knossos at that time became the political center of the new Achaean federation, but then it moved to Mycenae, and on the island, as well as on the mainland, one common Mycenaean culture was established, which united both Minoan and greek elements. 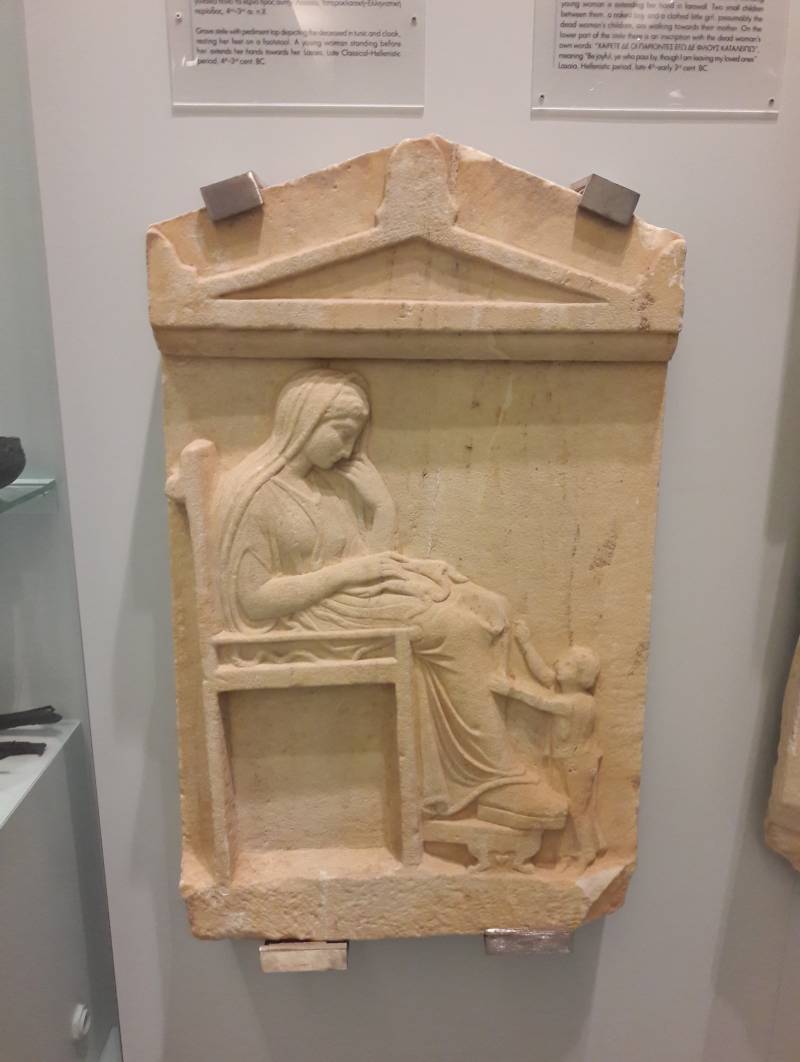 And this is already the tombstone of the era of classical Greece. Even the inexperienced eye can see style differences, isn't it? (Heraklion Archaeological Museum, Crete)

In the XII century BC. er Because of the internal crisis that arose soon after the end of the Trojan War (and this often happened later, even after victorious wars!), the Mycenaean civilization and culture were destroyed during the migration of Dorian tribes from the north. The Cretan writing fell into disuse, and the last autochthonous Minoans themselves took refuge from raids from the sea in villages located high in the mountains, such as, for example, Karfi, so that their language, like the ancient Minoan cults, existed for quite a long time. Thus, the last texts in the Etheo-Cretan language, already written with the help of the Greek alphabet, refer to the 3rd century AD. BC er - that is, after a millennium after the disappearance of the great Minoan civilization.

Ctrl Enter
Noticed a mistake Highlight text and press. Ctrl + Enter
We are
“They worshiped the bull!” The most developed Mediterranean civilization of the Bronze Age (part one)Chernobyl notebook. Part of 3
78 comments
Information
Dear reader, to leave comments on the publication, you must to register.