Eastern Guta - an oasis of contention on the outskirts of Damascus 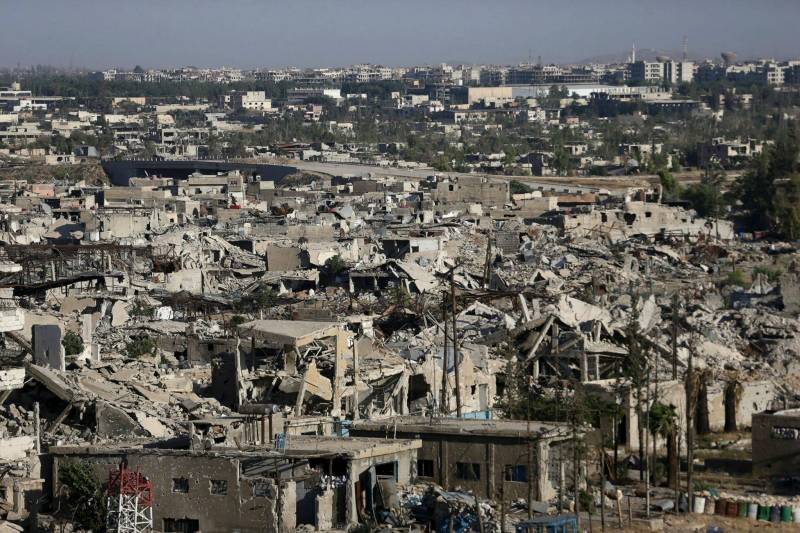 Since the outbreak of hostilities in Syria, the suburb of Damascus Eastern Guta has become a real stumbling block between government forces and illegal armed groups. For several years, the focus of tension has not abated in the regions of Joubar, Ain-Terma and a number of other settlements.

Only in the last two weeks, militants of various groups located on the territory of Guta have made numerous provocations, including shelling of positions of government troops. But the Syrian military was accustomed to such a scenario, and the terrorists took a more sophisticated way - during the past week, the leaders of the IAF “Faylak Ar-Rahman” stated that they were taking full control of the sale of flour and foodstuffs, as well as essential goods. A little earlier, on September 24, members of the Dzhebhat an-Nusra group (banned in the Russian Federation), who rejected the process of national reconciliation, actually looted a UN humanitarian convoy intended for civilians in Eastern Guta.

Also, militants have taken control of and blocked transport communications, which results in an acute shortage of both food and medicine.

“I drive car cereals, juices and various products from Damascus to Guta,” Nazim Al-Muhya says, “but because of the huge duties that people from Faylak Ar-Rahman take from us, the goods are sold in Guta heavier. If in Damascus you can pay 75 lire per kilogram of salt, then in Guta, the price comes to 3000 lire, and not everyone has that kind of money. ”

“We used to buy a gas cylinder for 2500 lire in Damascus and brought it home. Now that the roads have been closed, it’s worth 65000 lire in Gute. For us, this is unthinkable money. I do not even know how we will continue to live, ”complains a resident of the Harasta region of Eastern Guta, Rania Qayum.

Note that even 18 August 2017 of the year in Geneva, the management of “Faylak Ar-Rahman” signed an agreement on joining the cease-fire regime in the “Eastern Guta” de-escalation zone. According to the document, the group claimed responsibility to stop any hostilities, including shelling, against government forces and civilians. Earlier, on July 22, a similar agreement was signed between representatives of the Russian Defense Ministry and another major player in Eastern Ghouta - the Jaish al-Islam group.

But, despite the commitments undertaken, the militants continue to regularly bombard with mortars and other types weapons as the position of government wax, and the peaceful neighborhoods of Damascus. Given that the leaders of “Faylak Ar-Rahman” had previously promised that they would not coordinate with “Dzhebhat An-Nusroy” and even intend to conduct hostilities against it in Joubar, in fact it turns out the opposite: the leadership of this group has actually become an affiliated wing "Nusry". It becomes clear who sets the general negative tone and all the prerequisites for destabilizing the situation in Gut.

In the meantime, the humanitarian situation in Eastern Gute is only getting worse. What will happen in a few months is not difficult to imagine. Another humanitarian catastrophe, artificially provoked by the terrorists of the illegal armed groups who do not want to join the reconciliation process. Just what does the Faylak Ar-Rahman management think about, violating their peacekeeping commitments? The fact that "Dzhebhat en Nusra" will be the winner in this confrontation, or they are eventually rehabilitated? Hardly.