Hegemon will win in space, air, sea, on earth and in the virtual?

October 20 2017
28
The newest strategy of actions of the US Ground Forces has been determined. It covers everything from traditional combat operations to operations in space, cyberspace, air, sea and on earth. Strategists looked into the future: the document deals with the period of 2025 — 2040. 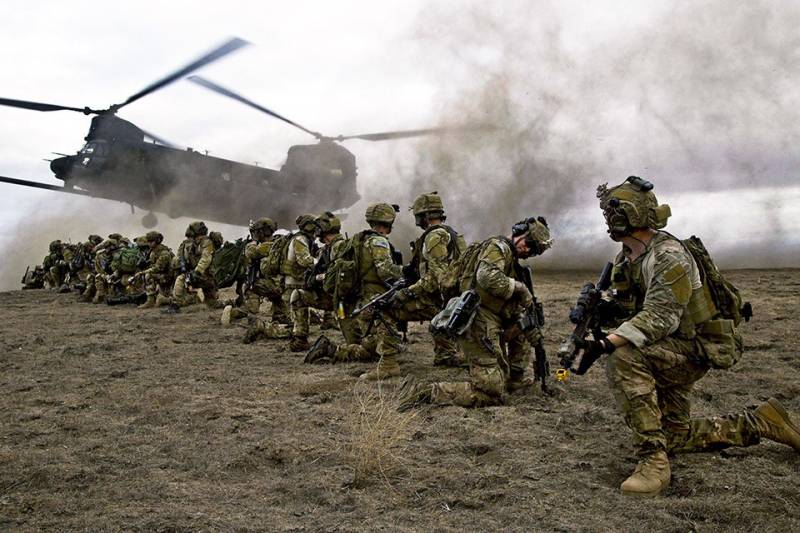 Published online document Commands of combat training and development of the doctrine of the US Army (TRADOC), dedicated to the development of a new strategy for ground forces. The text refers to the fighting and "successful campaigns" simultaneously on several fronts: in space, cyberspace, in the air, on land and at sea against "all opponents." Strategy framework (timeframe) - 2025-2040

The new strategy will require the participation of “people with supernormal abilities” and actions of “small groups”. These people and groups will be distinguished by the highest mobility and will be able to fight simultaneously "in all areas." Such units in the future will replace the "traditional large units" used in wars today.

After the end of the Cold War, the United States and joint forces had considerable freedom in all areas. The goal of the new concept is to prepare the state for a growing number of opponents who "challenge the global hegemony of the United States."

Evolution of combined operations in 2025-2040 will next one.

Small teams working on land, in the air and on the Internet will take on opponents who do not openly show themselves. The new strategy assumes that the enemies of America will attack in space, on the Internet, on land, at sea and on land in such a way that the very distinction between peace and war will be blurred. To adequately "meet these opponents", the army of the future must be much more mobile in all areas of war. simultaneously.

TRADOC created a kind of guidebook that the army of the future will take into account in the development of field manuals and in the preparation of the troops of tomorrow. The newest “concept paper” establishes that opponents “will make life for American troops” as difficult as possible. However, these enemies will not declare themselves enemies. The adversary’s “regular and irregular forces” will be combined “with criminal and terrorist groups”.

Not quite a new idea, says American analyst Patrick Tucker. According to him, the world has already seen how the modern hybrid war is organized, when "thousands of green men invaded the Crimean peninsula in 2014 year."

The concept gives four more reasons why the future army will not be able to successfully fight as it did in the past.

1. Information technology is growing exponentially. American troops can not proceed from the assumption that they will have the best means of communication, unmanned vehicles or computer equipment. As computers become smaller, cheaper and more affordable, the technological advantages of the United States will diminish.

2. The war will be much more "urban." About 60% of the world's population in 2030 will likely be living in cities, and many of them in megalopolises with a population of more than 10 million people. It is here, and not at all in the fields and deserts, that the adversaries will try to take action.

3. The Internet will become a key front not only in terms of cyber attacks, but also in terms of forming a global opinion on the conflict. "Troll troops" will distribute "fake news and disinformation ”, which, in combination with ordinary materials in the media, can complicate the army’s ability to“ receive and maintain an accurate, modern and reasonable understanding of the situation ”and exercise“ control over the information environment ”(from the document).

4. Every “bad guy” becomes a “joker”. The army will see the actions of “super-capable people and small groups” who can “use access to cyberspace, space and nuclear, biological, radiological and chemical arms».

In order to fight in the new environment of the 21st century, the army will have to move towards creating smaller and much more universal formations - to something like today's special operations forces that can perform a variety of missions. These "semi-independent" formations will not just be assigned to conquer territory and retain it. They, the same P. Tucker believes, will have to do everything: from the use of the UAV and protection from them to rocket launches at targets in the enemy’s territory. Equally, they should be able to "beat the bad guys in cyberspace." The operations of these small groups will be conducted “semi-independently”. They will have “neither protected flanks, nor constant communication with the higher headquarters, nor any stable communication line”.

“Semi-independent” is a key definition. The US Army does not seem to intend to return to “large tank formations. "

At the same time, this does not mean that each mobile unit will carry its own missile battery. Not. Rather, small teams should be able to access drones and fire support. The sources of such support themselves will not be large divisions either.

According to Mr. Tucker, the idea of ​​small elusive groups that are loosely connected and located “in extended networks” is in good agreement with what was previously defined as the future of the naval fleet and the U.S. Air Force. In the future, units are becoming smaller, and their number is growing.

Consequently, lone wolves and small land teams (not quite land, rather universal) soldiers, possessing some kind of super-power, will take to compete with other states. Conditions for such a strategy and the preparation of "super fighters", including abroad, the US has. American analysts remind that America has more than 70 military bases in more than 800 countries. And politicians do not intend to cut anything: for the sake of preserving global power, the US Senate this year approved a defense bill worth 700 billion dollars. For comparison: the peacemaker Obama in the budget for the 2011 fiscal year set a limit on military spending to 549 billion dollars.

Obviously, the build-up and modernization of military forces, initiated by the hawk Trump, are rapidly gaining momentum. It is difficult to say what the American army will achieve in 2025 — 2040, but today military strategists, drawing on the experience of unsuccessful “traditional” wars in Afghanistan and the Middle East, generate ideas for small decentralized groups capable of expressing themselves in several areas at the same time: cyberspace, space, in the air, on land and in the sea. This is a kind of response today to tomorrow's war.

By the way, as another point, the TRADOC document establishes the receipt of profits by the US military-industrial complex. It is felt that a businessman sits in the Oval Office.