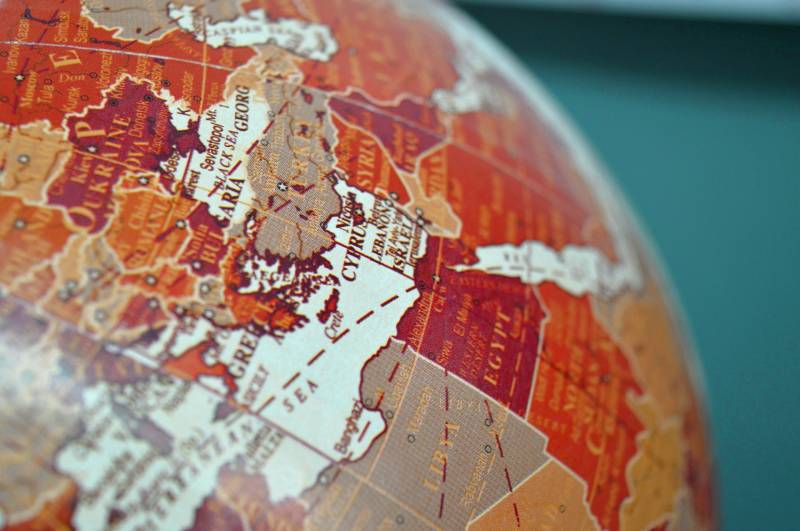 It is safe to say that Turkey’s political activity and ambitions have grown significantly in recent years. Should I list all those news reports summarizing either ambitious statements by Turkish politicians or events related to this state? The current ruling circles of Turkey are not satisfied with the situation, the influence and the political opportunities that they have. They really want more.

Not so long ago, Turkey tried to satisfy its geopolitical ambitions due to the chaos, which was formed as a result of the “Arab Spring” and the activities of terrorist organizations, which significantly strengthened after this “spring”. Russia's military-political interference in Syrian affairs has frustrated the predatory plans of the Turkish leadership. But Turkey did not abandon these plans. Turkey is still trying to survive the most out of the ongoing war in Syria, but given the new circumstances, which strongly restrain its appetites. For example, the same input of troops and the formation of bases in the Syrian province of Idlib. Despite the fact that Ankara refers to the agreements on the creation of de-escalation zones concluded in Astana, the Syrian government called this step "the invasion of Turkish troops", demanding their withdrawal.

What contributed to the growth of these ambitions?

The issue of Turkey’s accession to the EU has been for many years, but, as they say, it's still there. Europe does not want to see Turkey as a member of its Union. Leaders of countries such as Germany, France, Austria have repeatedly spoken against this entry. However, lately, Turkey’s desire to join the EU has significantly decreased. Although the issue has not yet been officially closed, Erdogan has repeatedly stated that the enthusiasm to resolve this issue in Turkey has died away. Literally, 1 of October was told to them that: “We no longer need membership in the European Union,” and also: “We would be happy to make our contribution to the future of Europe,” Erdogan said. - If this does not happen, it does not matter to us. We will continue on our own path. ” In the 2015 year, then still the vice-premier of Turkey, B. Arinc, noted that the percentage of citizens for joining the EU decreased from 75% to 20%.

In general, the prospect of joining the EU, which has been Turkey’s goal for more than a decade, is melting away. So Turkey is trying to find its own way. And for this we need an ideology that would set strategic goals.

There are two ideological alternatives, Western European Turkey, which never became a reality. This is neo-Ottomanism (neo-Islamism) and Pan-Turkism, both of these concepts refer to the past, to the times of the Ottoman Empire and the Turkic kaganates. Supporters of neo-Ottomanism need to Islamize society. The Ottoman Empire positioned itself nevertheless as the last caliphate. And the followers of Pan-Turkism should stir up the people with the dream of the Great Turan, that is, the political union of the Turkic-speaking peoples. Neo-Ottomanism and Pan-Turkism are behind such powerful social structures as Turkish Sufi takrikats and the notorious organization Gray Wolves. Erdogan and his entourage are representatives of neo-Ottomanism.

But one thing - Turkish ambitions, dreams. Another is the possibility of their implementation. If we recall the comparison of chess with geopolitics, then we can formulate the question like this: where are those free cells, where could Turkey go? And it turns out that there are no free cells around, they are all occupied by other powers.

How much can Turkey expand its influence in a southwesterly direction from its borders? Yes, once present-day Turkey was the center of the Ottoman Empire, which in turn was a caliphate. The title of Caliph the Ottoman sultans intercepted from the rulers of the Mamelukes, defeating them. Huge territories with the Arab population were part of the Ottoman Empire. But today such Arab states as Egypt and especially Saudi Arabia are unlikely to want to be the second violin in the Turkish game. Surely, they will restrain the expansion of Turkish influence. Saudi Arabia has no less ambitions, military and political opportunities.

There is another country in the Middle East, comparable to Turkey in terms of population, economy, military potential - Iran. History their relationship is not very simple, and any expansion of Turkey’s influence is unlikely to be applauded in Iran. And for the same Iran, it does not matter under what banner (neo-Ottomanism or Pan-Turkism) this expansion will be proclaimed. Once the Turkic Kaganates expanded rapidly, uniting vast steppe expanses with nomads, and later struck the neighboring powers of the sedentary population. Where are now such loose territories (spaces) - that is, not filled cells? In the Caucasus, Central Asia, in the Volga region there is either Russia, or the interests of Iran and even China. Not to mention that the national states of the Caucasus and Central Asia themselves have their own goals and hardly want to recognize Turkish Pan-Turkism together with the Turkish leadership. Take at least Azerbaijan. Despite certain overtures to Turkey, Azerbaijan still can’t jeopardize relations with Russia and Iran, with which it borders, and has close economic, cultural and ethnic ties.

In this context, a proverb is appropriate - do not throw it, everywhere there is a wedge. It is likely that in the medium term, Turkey will continue to rush between the United States, Europe, Russia, the Arab East and the Turkic-speaking countries, trying to at least somehow satisfy the growing ambitions. Consequences of all these Turkish throwings will be contradictory statements and actions of the Turkish leadership, which we will observe until some tectonic shifts occur on the international arena.

We can say that Turkey is now reminiscent of a boiling pot with a lid. The cover is held back by geopolitical circumstances. But sometimes the internal pressure lifts her slightly, and a jet of hot steam erupts from it in the form of some harsh statements or adventurous actions by the Turkish leadership.

Ctrl Enter
Noticed oshЫbku Highlight text and press. Ctrl + Enter
We are
About Stalin and KhrushchevWhat you didn't want to know about England
Military Reviewin Yandex News
Military Reviewin Google News
24 comments
Information
Dear reader, to leave comments on the publication, you must to register.