In the West, he is respected, in Russia he is hated. Paradox!

October 18 2017
112
Reformer Gorbachev, who "helped put an end to the Cold War," has no place in modern Russia. This is written in the major Western media. 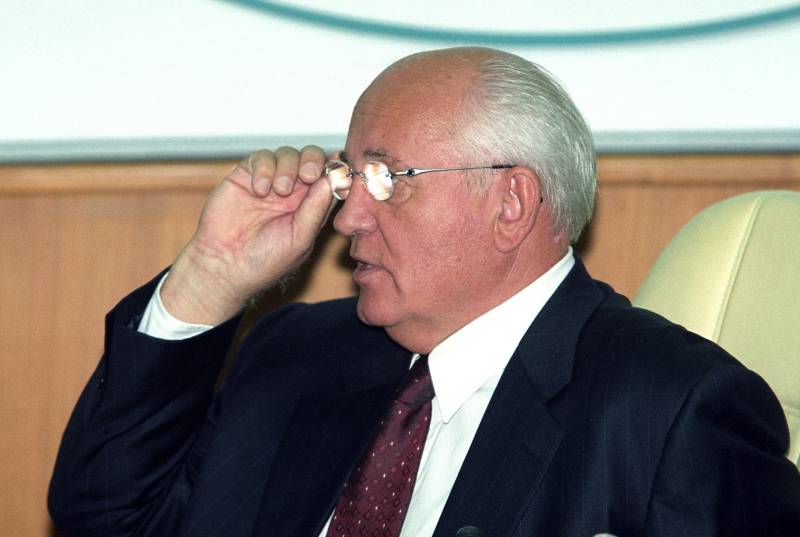 In November, 2017 will mark 100 years of the October Revolution, which opened the Soviet era, writes Jennifer Klibbon (Jennifer Clibbon) on the site CBC News. The Communists ruled 74 of the year - that was how much the “Soviet empire” existed, the journalist points out.

In 1980, Mikhail Gorbachev decided to reform the Communist Party of the Soviet Union “from the inside,” thus marking his figure as the “era of political and economic restructuring,” which laid the foundation for the end of the Cold War and the collapse of the USSR.

A new biography book “Gorbachev: His Life and Epoch” by historian William Taubman has just been published. The journalist believes that this work gives "a convincing look at the last leader of the Soviet Union."

Taubman says Gorbachev "changed his country and changed the world."

86-year-old Gorbachev, who released his own memoirs ("I remain an optimist"), lives in Moscow. However, this prominent Soviet reformer is marginalized "in Vladimir Putin's autocratic Russia."

The book, Taubman, indicated in the material, recalls the “idealistic era” of the 1980s, when a very self-confident and relatively young leader of the Communist Party of the USSR decided to start reforms that “would help his country relieve the burden of the Stalinist past” and finally move on to the future .

Taubman speaks fluent Russian. He spoke with Gorbachev eight times, interviewed in tandem with his wife Jane, a teacher of Russian at a college in Massachusetts, where Taubman himself taught for decades.

The historian speaks of Gorbachev as follows: informal, naturally behaves, a person with a sense of humor. Taubman also noted that Gorbachev had not yet read his new book, but had already thanked him “from the bottom of his heart” for the letter.

This book seems to fill the gap: after all, there are very few Gorbachev biographies in Russia written by someone other than Gorbachev himself, believes Jennifer Klibbon. Such inattention to Gorbachev is explained by the paradoxical attitude towards him in his own country. There are many Russians who still admire him. But many of those who despise him - and these people will hardly be happy with an objective biography.

Gorbachev is much more admired in the West and even in Eastern Europe and much less in Russia. Western societies honor Gorbachev's great achievements: the destruction of totalitarianism, laying the foundations of democracy, the end of the Cold War. However, even those Russians who value these achievements cannot forget about the economic and social collapse, the collapse of the Soviet state and the loss of the Soviet empire.

As for the present and recent past, Gorbachev supported Putin’s candidacy for the presidency of Russia in 2000, however, he opposed his re-election in 2012. He criticized Putin’s authoritarian rule and compared Putin’s United Russia party with the Communist Party under L. Brezhnev.

Gorbachev was an "exceptional" Russian leader, as well as a world statesman, the journalist said. Still, Gorbachev’s view of the post-Cold War world, based as far as possible on the rejection of violence, was idealistic. Under Putin, Russia, "alas, has returned to its traditional authoritarian and anti-Western tradition."

What paradox did the journalist Jennifer Klibbon reveal in relation to the Russians towards M. S. Gorbachev? Actually no. He is disliked (and this is the least) because of the economic disruption brought about by “perestroika”, the shortage of goods throughout the country, and the empty store shelves. This is said even by those who at one time liked “acceleration”, “publicity” and “restructuring”. That is why many Russians voted for Yeltsin at one time: he and his advisers promised the people all the benefits of the market, starting with plenty. True, they preferred not to specify that money would be needed for abundant life. Much money.