October 20 2017
10
On the gloomy autumn day of October 17 1941, the fascist troops captured the beautiful southern city of Taganrog. This ancient city, located on the shores of the Azov Sea, was founded by Peter the Great in the distant 1698 year. He became the first naval base in Russia. Besides, история The city is closely connected with the name of his faithful son, the outstanding classic of Russian literature, Anton Chekhov. The great writer would have turned in his grave if he had learned that in the building of the gymnasium where he was studying, foreign invaders would arrange for the Gestapo ... 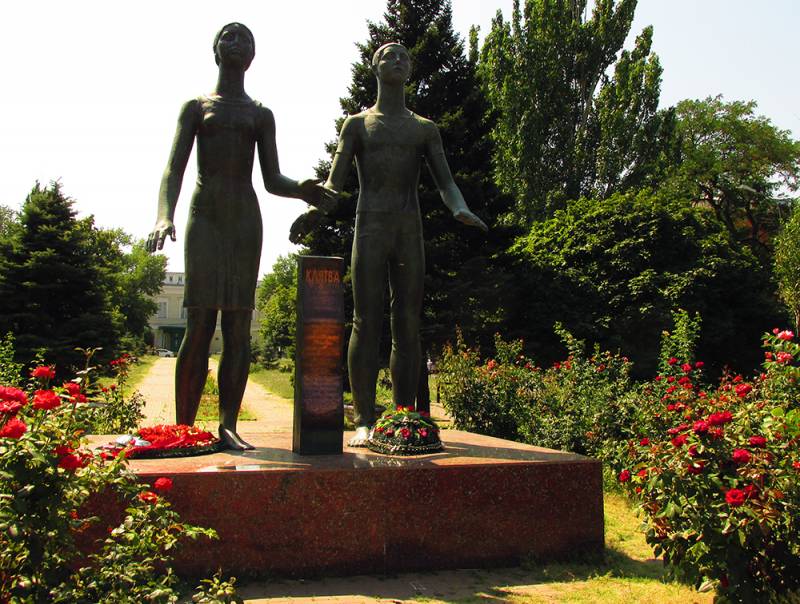 The Nazis entered unexpectedly quickly. The German command threw selected units of the 13th, 14th, 16th against the city tank divisions, the 60th motorized division and two SS motorized divisions - "Viking" and "Adolf Hitler". Soviet troops in unequal battles failed to stop the enemy. They also did not have time to properly evacuate enterprises and institutions - everything happened too quickly, and the road to Rostov-on-Don was cut off. Only relatively little equipment was removed from the factories, and some more had to be hastily blown up. But the invaders got too much - along with the city, which suddenly found itself under an iron heel.

And from the first days the resistance of the inhabitants of Taganrog began to the hated enemy. The secretary of the Komsomol city committee, Nikolai Morozov, who was formerly a pioneer leader and teacher, had great authority with local children. From the very first day of the occupation, he decided to create an underground organization. In fact, Morozov’s name was Semyon, but among the guys he caused an association with Nikolai Ostrovsky, therefore they called him Nikolai. He took this name as an underground name.

At that time, neither Morozov himself, nor the guys who followed him, none of them knew that Ostrovsky’s famous words: “Life must be lived in such a way that it did not painfully hurt over the years spent aimlessly, so that it would not burn the shame for its petty and petty past and, when dying, could say: all life and all forces were given to the most beautiful in the world - the struggle for the liberation of humanity»Will treat them fully.

Senior comrades - Yagupiev, Reshetnyak, Bogdanov, - dissuaded Morozov from his undertaking. On the one hand, you need to think about the organization of the struggle, on the other - he was too famous person in the city. But Nikolai was adamant - he believed that, thanks to his authority, he would be able to create an organization that could give the Nazis a proper rebuff.

The first to whom Nikolay addressed was the family of the Turubarovs. Already an elderly father, a fisherman, who had a son Peter and two daughters - Raisa and Valentina. They responded enthusiastically to the idea of ​​organizing resistance. Soon Leva Kostikov, Zhenya Sharov joined the organization, then others began to catch up. Many of them were not even eighteen years old, and some were not even sixteen ... The main difficulty was that not everyone could be trusted. A mistake in such a thing can be very expensive ...

There were, however, in the city and scum, who gladly met the invaders. First of all, those who considered themselves defeated in the Civil War, who hated the Soviet state and considered themselves offended by it. It was these “people” who were the first to serve the fascists. In Taganrog it turned out to be the Kirsanov brothers, Alexander Petrov, Boris Stoyanov. Yury Kirsanov became the chief of police, his brother Alexey - the editor of the fascist rag, Petrov and Stoyanov also received positions that they worked with special diligence.

The “exploits” of the enemies began first with “de-communization” - the total renaming of the streets (good teachers of the current de-communizers!), And the next step was a mass execution of Jews.

The first step for those who decided to resist the enemies was an unsuccessful attempt to save the Jews from a sad fate. The guys tried to warn them not to submit to the German order “to come to Vladimirskaya Square, to take documents and material values ​​with them”. The Nazis explained such an order by the desire to “protect” the Jews and resettle them in a specially designated area, but the Komsomol members understood that there was no defense at all, and those who appeared would be robbed and killed, as has happened in other cities.

Someone managed to persuade to run away, but many Jews did not listen - they thought that it would be safer to execute the order of the invaders and appear where it was said. October 29 1941, on the western outskirts of Taganrog, on the Petrushina Spit, thousands of those who decided to submit to the Nazis were shot. Even talking about this shooting is strictly prohibited. The truth about what happened on the Petrushina Spit was spread by members of the underground in their leaflets.

The Nazis ordered the population to surrender all the available weapon, radios and even pigeons, so that the pigeon post is not organized. In the days when the fate of Moscow was decided, the Soviet people who were under occupation had nowhere to get information, what was actually happening there, in the battle for the capital. Enemies, of course, spread rumors about their victory near Moscow.

... Gestapo man Willy Brandt lodged in the house, among the inhabitants of which was 18-year-old girl Nonna Trofimova. She was fluent in German, was fond of literature and classical music. Brandt liked her, and he tried to find a common language with her. Nonna did not know what to do. Poison the invader? Then they will shoot her mother and grandmother. Yes, and Willy seemed to her at first not the worst German (until she saw a ring on his finger that belonged to one of her teachers). He even let the girl listen to the radio.

Nonna’s school friends, Nikolai Kuznetsov and Anatoly Mescherin, were by then resistance participants. They prompted her what can be done to fight the enemy. It is necessary to use the privilege to listen to the radio and record bulletins of the Soviet Information Bureau. These reports were distributed by underground workers as leaflets, raising the morale of the inhabitants of the occupied city.

In addition, Nonna went to the infirmary, where there were wounded Soviet prisoners of war. Her mother, a doctor, worked there. The girl did her best to alleviate the plight of the prisoners. Subsequently, she extracted the documents necessary for their escape. With the help of Brandt, she managed to get a job with a fascist translator. We had to endure the condemning views of the inhabitants - they did not know that the girl risked her life every day, extracting important information and completing the tasks of the underground ...

Not only leaflets were engaged guys. They carried out bold combat operations. Just a month after the occupation, 19 November 1941, the heroes worthily celebrated the 24 anniversary of the Great October Socialist Revolution - an explosion of the German commandant's office. Then the 147 invaders died. The commandant survived a miracle. In May, 1942, the guys undermined the German warehouse. The enemy has lost a huge amount of ammunition. Various sabotage was also arranged at the enterprises. Cars of fascists were destroyed, rail war was waged ...

The big problem was that after each sabotage the fascists shot hostages from among the prisoners. Therefore it was necessary to avoid unnecessary, insufficiently effective force actions.

By that time, a sufficiently strong and numerous underground organization had already formed in Taganrog. Vasiliy Afonov became its leader, Nikolay Morozov became the commissioner.

Young heroes were preparing for an armed uprising. They believed that it was necessary to raise it when the Soviet troops were very close. To do this, they accumulated weapons, reaching them wherever possible, often stealing from the Germans.

Several times it seemed to them that the Red Army was about to liberate the city. The front line was near - at Sambek. In Taganrog, the rumble of those battles was often heard. During its occupation, Rostov-on-Don was twice captured and liberated. For the first time, the occupation of Rostov lasted only a week - on November 20 of 1941, it was captured, and on November 28 - already released. In July, 1942, unfortunately, was again captured by the Nazis. In February 1943, Rostov was again liberated by Soviet troops.

Of course, at such moments when Rostov-on-Don was liberated, the residents of Taganrog hoped that their city would soon be spared from the enemy. However, the occupation of the seaside city lasted a long time - 680 days. No other city of the Rostov region could endure such a long suffering ...

Alas, no underground organization can do without traitors, without failures, without mistakes. And in the case of arrest, not everyone can endure torture. Someone fails to "split" on cruel interrogations - but the information can be obtained with all sorts of cunning, vile methods ... Because the history of the Taganrog underground is deeply tragic ...

The first terrible blow struck the organization 18 February 1943 of the year. Nikolay Morozov was in the house of the Turubarovs family, where the meeting was held, when the policemen arrived there. Immediately a large group of underground workers was arrested. Among them are Morozov, as well as the Sisters of Turubarov. As for Peter Turubarov, the information is contradictory. In the book of Heinrich Hoffman “Heroes of Taganrog” it is said that he managed to escape and he subsequently continued the struggle, but according to other information, he shot himself during the arrest.

The arrested guys were subjected to terrible torture. After the interrogations, Nikolai Morozov, Valentina and Raisa Turubarov, Lev Kostikov and others were shot in Petrushina Beam 23 in February 1943 of the year. (Later on, in 1965, Morozov will be awarded posthumously the Star of the Hero).

However, the organization continued to operate, despite these heavy losses. The Nazis knocked down, looking for those who remained. But because of the traitors introduced into it in May 1943, more than 100 underground fighters were arrested.

All of them went through monstrous torture. Unfortunately, there were those who could not stand it. In particular, Anatoly Mescherin surrendered to Nonnu Trofimov, who had to endure terrible tortures, but she remained true to duty. A particularly hard blow for the girl was that she was betrayed by a man whom she had fallen in love with by that moment.

The head of the organization Vasily Afonov, his brother Konstantin, Sergey Weiss, Yuri Pazon, Vladimir Sharolapov are just some of the names of those who were shot on July 6 1943 of the year after agonizing torture in the same Petrushina gully, which was later named Death Beam.

Underground was crushed. But the enemies did not have to triumph for a long time. 30 August Taganrog was liberated by Soviet troops.

Today this city bears the solemn title of the City of Military Glory. And next to the gymnasium, where AP Chekhov once studied and where the Gestapo was located during the occupation, a monument was erected to the underground workers “Oath of Youth”. A young man and a girl stand forever under the southern sun, their hands above the text of the sacred oath ...