October 19 2017
35
During the Great Patriotic War, Soviet fighters and commanders often displayed massive heroism, which ultimately led the country to victory in this cruel war. Stories There are cases when following a battle for the title of Heroes of the Soviet Union were represented by whole groups of Soviet soldiers. The most famous such case is the story of 28 Panfilov, which is widely covered in history textbooks, in special literature, and in art. Less well known is the feat of thirteen heroes of the 15 Krasnovka January 1943. All of them died, but for their courage and heroism in battle, they were posthumously presented to the rank of Heroes of the Soviet Union.


Today Krasnovka is a small farm in the Tarasovsky district of the Rostov region, it is located near the Ukrainian border. During World War II, there was a large railway station Krasnovka and a small village Donskoy, which in the winter of 1943, became the scene of fierce battles between the advancing Red Army units and the Nazi troops. The Krasnovka railway station in January 1943 was an important node of the German defense.

1 January 1943, the Soviet troops launched the Rostov offensive, which was part of the North Caucasus strategic offensive operation of the troops of the South-Western, Southern and Transcaucasian Fronts. The main objective of the operation was the liberation of Rostov-on-Don, in addition to this, the Soviet troops had to cut off the withdrawal routes of the North Caucasian group of the German fascist troops to the north. In two weeks of fighting, the troops of the Southern Front fought approximately 150-200 kilometers and reached the bend of the Don and the Manych basin. By the end of January 23, the troops were at the turn of Seversky Donets, Don, Merry, Celina. During the general offensive by mid-February 1943, most of the territory of the Rostov region was liberated from the Nazi invaders. It was during this operation that the historical battle of Krasnovka station occurred. 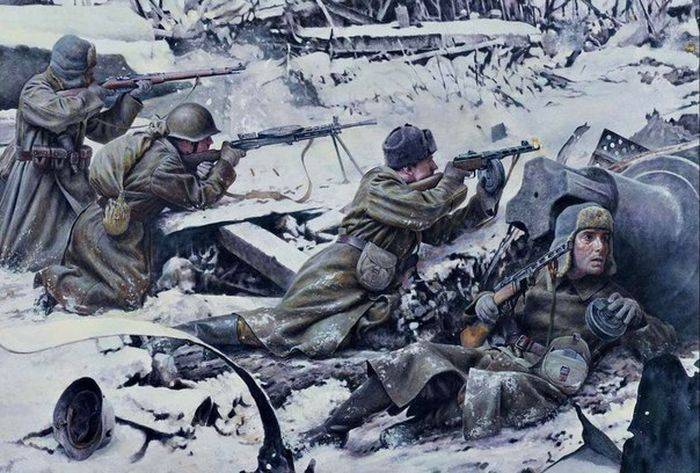 With heavy fighting, cramping German troops and moving west, Soviet soldiers reached the railway station Krasnovka, Rostov region. Here, the enemy managed to build a high shaft of straw and snow, which was then poured with water, creating a kind of peculiar fortress, barbed wire was stretched on the top of the shaft. To seize this railway junction and the station itself was ordered to soldiers of the 130 regiment of the 44 th Guards Rifle Division. The station, which was located on the railway line Millerovo-Voroshilovgrad and was an expensive strategic, was of great value both for the attackers and for the defenders. The 130 regiment fighters were ordered to seize a section of the railway in the area, preventing the German echelons with soldiers and equipment from moving towards Stalingrad.

At dawn on January 15, a company of Lieutenant Ivan Likunov went to storm the man-made German fortress. Snow or better to say the ice wall was rather slippery and high, the fighters found it difficult to cling to something. Making their way to the top, they helped themselves with bayonets, while the enemy threw grenades at the attacking soldiers, which, however, did not stop the brave guardsmen. It is worth noting that the attack also took place under the enemy’s dense mortar and machine-gun fire, but this did not prevent the Soviet soldiers from seizing the rampart and reaching the outskirts of the railway village Donskoy (today Krasnovka hamlet), capturing three houses on the outskirts of this settlement. True, this promotion was given a very expensive price, only 13 fighters of the company of the guard Lieutenant Likunov could reach the houses.

The burst guardsmen defended in three huts, responding to enemy attacks with friendly fire from all that they had weapons. Guards Lieutenant Ivan Likunov with four fighters occupied the far left hut, sergeant Nikolai Sevryukov and privates Konstantin Polyakov, Timiry Kubakaev and Nikolai Sirin entrenched in the middle. The defense in the far right hut was led by junior lieutenant Ivan Sedov of the Guard. Despite repeated enemy counterattacks, the fighters held these positions throughout the day. Brothers several times tried to break through to their rescue, but they were stopped by the disastrous enemy artillery fire. 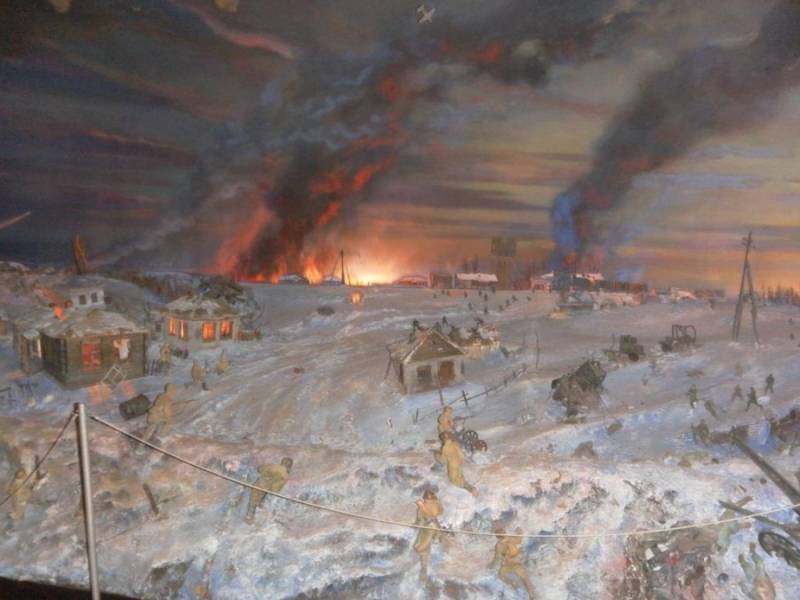 Diorama from the museum 13 Heroes of the Soviet Union in Krasnovka, photo: ankol1.livejournal.com
As noted in the award sheet of one of the heroes of this battle of the Red Army guard Ivan Tarasenko, the Germans repeatedly suggested that the defenders surrender, to which they answered: “The guardsmen are not surrendering!”, Opening fire on the enemy. During the day, the Nazis threw several times against a handful of daredevils to the company of infantry with tanksbut those managed to fight back. In the end, the Germans managed to surround all three huts in which daredevils took refuge and impose a straw on them. After the straw was set on fire, the flame quickly spread to the houses, but still no one came out of the burning huts. Their defenders continued to fight until they ran out of ammunition. When the ammunition came to an end, some of the defenders rushed into a bayonet attack, trying to break through the enemy’s positions to their own. However, the forces were too unequal, and they all died in this battle. When the Soviet artillerymen crushed the enemy’s batteries and the advancing Soviet troops were still able to break into the village of Krasnovka station, three huts were burned out on the edge, around which about a hundred killed enemy soldiers and officers were counted.

By decree of the Presidium of the Supreme Soviet of the USSR from 31 in March 1943, for the courage and heroism shown and exemplary performance of command tasks in battles with the German fascist invaders, all thirteen heroes of Krasnovka were posthumously presented to the title of Hero of the Soviet Union and awarded the Orders of Lenin. Here are the names of the heroes: Guards Lieutenant Likunov Ivan Sergeevich, Guards Junior Lieutenant Sedov Ivan Vasilievichs Konstantin Illarionovich, Guard Private Sirin Nikolai Ivanovich, Private Guard Tarasenko Ivan Ivanovich, Private Guard Utyagulov Zubai Tukhvatovich. All the soldiers who died in this battle were buried in a mass grave near the railway station, which they stormed.

In the post-war years, the heroism of Krasnovka’s 13 heroism was in oblivion for a long time, ”said Natalia Marchenko, the keeper of the local museum. Only in 1955, in the course of the search in one of the graves, would the medallion of ordinary Kotov, the Hero of the Soviet Union, be found here. Then there was information about the burial of all 13 heroes here. Large-scale search work began, and other dead Soviet soldiers were found. At the same time the collection began literally bit by bit information about each of the 13 heroes, there were relatives of these people, correspondence was established with them. And only after 14 years after the dead battle, it was decided to open a museum here. 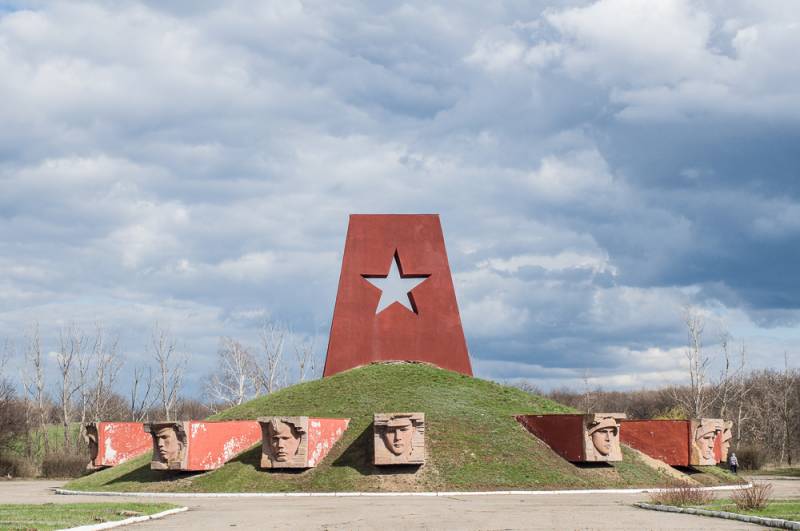 Monument to the fallen heroes, photo: ronald-man.livejournal.com
So the feat of thirteen heroes of Krasnovka was not forgotten. At the platform station Krasnovki they had a monument. Also in Krasnovka, Tarasovsky district of the Rostov region, the 13 Museum of Heroes of the Soviet Union was founded, it happened on April 16 of 1957. The museum was opened on October 12 1968. The founder of the museum was Gudyrenko Ivan Nikitovich. If you will be in these places, be sure to honor the memory of the dead heroes and try to visit the local museum.

The museum has almost 500 storage units in the collection, of which 353 is the main stock of the museum. Among the exhibits there are personal belongings and documents of the thirteen soldiers of the 130 Guards Rifle Regiment of the 44 Guards Rifle Division, photographs, documents of their fellow soldiers and relatives, there is also a fairly large-scale diorama - “Fight for the Krasnovka station”. Immortalized their memory in Moscow. The Central Museum of the Armed Forces has a separate stand, which is called “Thirteen Heroes of Krasnovka”.

It so happened that far fewer people know about the heroism of 13 heroes of Krasnovka than about the feat of 28 Panfilov. Most likely, the main reason is that General Panfilov’s soldiers tell about the exploits of the division’s soldiers in the school curriculum. For the sake of justice, it should be noted that it is almost impossible to describe all the feats of Soviet soldiers during the Great Patriotic War, and a hundred history books will not be enough for this. This is the greatness of the Victory, which evolved with every drop of spilled blood and sweat of Soviet soldiers on the battlefields. To win the war, for the freedom and independence of our Motherland, they gave everything they could, including their lives, and this is the greatest feat that must always be remembered.

Ctrl Enter
Noticed a mistake Highlight text and press. Ctrl + Enter
We are
Cossacks in World War IIMyths of the Great Patriotic. Papier mache helmet
35 comments
Information
Dear reader, to leave comments on the publication, you must to register.