October 18 2017
38
Ukrainian military sailors made boastful threats against Russia. In particular, they talked about using what tactical instrument they are going to confront the Russian Black Sea the fleet. What do these bravura statements mean and in reality what could the Ukrainian Navy theoretically threaten Russia with? 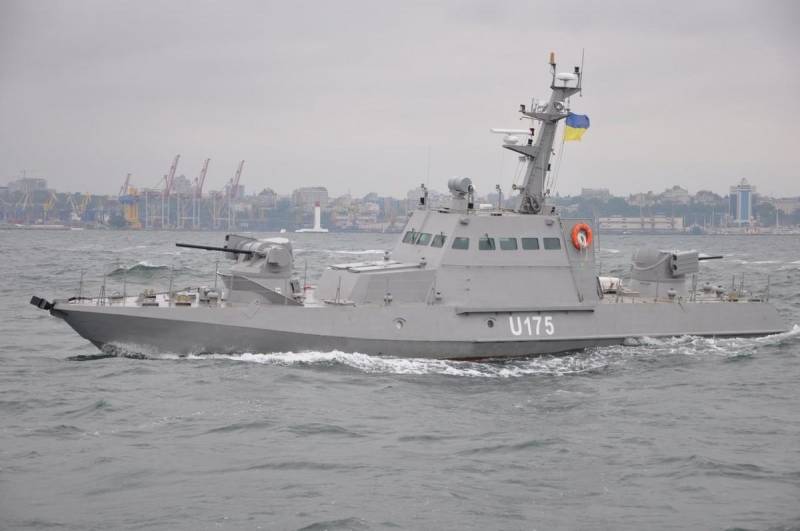 Ukrainian military thought once again invented the bicycle. This is how one can characterize the statement of the Kiev military that "a new tactic of the Ukrainian fleet is being born on the Black Sea" (according to TSN). This is the so-called "Wolf Pack" or "Mosquito Fleet." It is them who now have to be afraid of the "enemies of Ukraine," says the Ukrainian press.

“Wolf Pack” means that together with six of us we can rush to a larger enemy ship, ”commander of the Ukrainian armored boat Alexander Regula told the TV channel. “At the same time, he (the enemy's ship) is not able to conduct many targets and, let's say, to fire on them,” explains the tactical reception commander of another armored boat Roman Mokryak.

On the maneuvers just held, the boats attacked the conditional “aggressor”. It is noted that the Naval Forces have just received several new boats, three or four more will arrive soon, Alexander Vishnevetsky, deputy general director of the Kiev shipyard of Kuznitsa at Rybalsky, promises. The military admit that they dream with their help to return the strategic gas platforms that have moved Russia along with the Crimea.

“In fact, sea battles are already underway. The Russians twice opened fire just in the Ukrainian water area not far from Odessa. They were shooting at a diving ship and a military plane, ”writes UNIAN. The Ukrainian agency, however, does not specify that these were warning shots in the air, which forced the Ukrainian ships to depart from Russian naval facilities.

It remains to add that the armored boats in question are not even missile boats carrying anti-ship missiles and because of this they can actually pose a potential threat to the Russian Black Sea Fleet. Everything is much funnier

- there are two such rocket boats nominally in the Ukrainian Navy, and in reality they are hardly combat-ready. The same Ukrainian sailors who voiced threats against Russia are being mastered by completely different ships — recently, the Gyurza-M project boats with a displacement of 51 tons and armed with a 76-mm cannon and a large-caliber machine gun entered the Ukrainian Navy with great fanfare. Russian experts at one time characterized these ships as "squalor." That was soon confirmed - in the design of armored boats found numerous miscalculations.

For comparison, it is enough to say that the corvettes arriving at the Black Sea Fleet of the Russian Federation now (also small class ships) have a displacement of thousands of tons in 2,2.

What is the "mosquito fleet"

It is no less curious that the commander of the armored boat argues on matters of naval tactics and strategy of the Ukrainian Navy. That is a very young officer, a recent graduate of a military college. By the way, the channel proudly claims that Regula was one of several cadets who refused to go under Russian flags in 2014 in Sevastopol. All this is very patriotic for Ukraine, but does not remove the question of the competence of its seamen.

The concepts of "Wolf Pack" and "Mosquito Fleet" in the fleet do exist. "Wolf Pack" - a tactic of pursuing enemy ships with submarines in order to wait for numerical superiority, and it was used by Germany and the States in World War II. What does the missile (and artillery) boats do to do with this? It is not clear, but Ukraine has no submarines. As they say, they hit a finger in the sky.

Here "Mosquito fleet" - perhaps the more appropriate term in this situation. It involves a combination of high-speed and maneuverable small warships, such as torpedo, patrol, missile and other boats. Moreover, the Ukrainian boats of the project “Gyurza-M” are indeed in the mosquito category.

Cruisers do not walk in proud loneliness

"Mosquito fleet" was used in the Baltic, and even the term is used. Maybe in the coastal version, this tactic could be applied. But it does not apply against the Russian fleet. A small ship is a small ship. For its operations, ideally quiet weather is needed, which almost never happens, ”the adviser to the Chief of the General Staff, Admiral Igor Kasatonov, who led the Russian Black Sea Fleet in 1991 – 1992, explained to the VIEW newspaper.

As for large ships, they are always accompanied, there is always reconnaissance around them, including “situation lighting systems,” Kasatonov reminded and added:

“It seems to me that all these statements are nonsense, an attempt to politicize their achievements. I do not think that this tactic can be effective. These are just scare attempts. ”

Ukraine can not boast not only the authorship of the idea of ​​"mosquito fleet." The concept appeared even during the First World War. At that time, it was believed that fast, maneuverable and inconspicuous boats could withstand the enemy’s armored fleet in coastal areas, depriving them of their domination. Here are just further practice of such submissions refuted. In the USSR, the theory of the “small fleet” (preference for a large number of small ships to the detriment of the construction of large ones) was the official naval doctrine since the 1920s. However, already in 1936, it was abandoned in favor of the Big Sea and Ocean Fleet program.

Oddly enough, the new life in the "mosquito" tactics breathed the end of the Cold War. At the beginning of the 2000, when the military budget was declining, the US Navy was faced with the fact that they simply did not have enough money to purchase and maintain large ships. There was an idea to replace some of them with a large number of small ships. A program to create littoral (coastal) warships was launched.

Even the Pentagon has not yet decided

As envisioned by the Pentagon, smaller ships should attack larger groups from different directions with the support of drones, helicopters, electronic suppressors, as well as cruise missiles and other coastal-based weapons.

However, many US military eventually became disillusioned with the program. The reason was not only that the construction of littoral ships was much more expensive than planned, but also in their lack of effectiveness.

In 2014, an alternative program was proposed for the construction of so-called small surface combatants - frigates with slightly different characteristics. As a result, both programs are not curtailed, but are in limbo, because the Pentagon has not yet decided whether to complete them, reduce them or replace them with a new plan. But in any case, even these small American ships of the coastal zone have a displacement of even more than Russian corvettes - 2,8 thousand tons.
At the same time, it was the Americans who advised Kiev to concentrate on building small ships, for example, the very Gyurza artillery boats. In their opinion, the concept of a group strike of small ships could not be better suited for countries that do not have a large military budget.

Perhaps this idea can really be successful for the survival of the Ukrainian fleet. Here are only threats that, with their six boats, the Ukrainian Navy will make Russia tremble, at least ridiculous.

“In reality, the Ukrainians have no other ships, except for those very few boats. Technically and professionally they have nothing to carry out their delusional threats.

The only thing they can do is sabotage from boats, civil courts. But for this we are working on various options for anti-sabotage protection.

Such options on the Black Sea Fleet and other fleets are in the combat training program. This is the norm, ”said Mikhail Nenashev, Chairman of the All-Russian Movement for the Support of the Fleet, told VZGLYAD newspaper.