On whose terms will Russian gas go to Europe

October 17 2017
6
On Thursday of last week, in Brussels and Kiev, they were almost simultaneously engaged in gas issues. In the Ukrainian capital, as part of the so-called ІІІ Gas Forum, they discussed the transit of Russian gas through Ukraine and the EU’s participation in the management of Ukrainian gas pipelines. In the capital of the European Union, an expert council decided the fate of the trans-European mainline Nord Stream-2, which in many respects made the Ukrainian gas pipelines and the forum in Kiev meaningless. 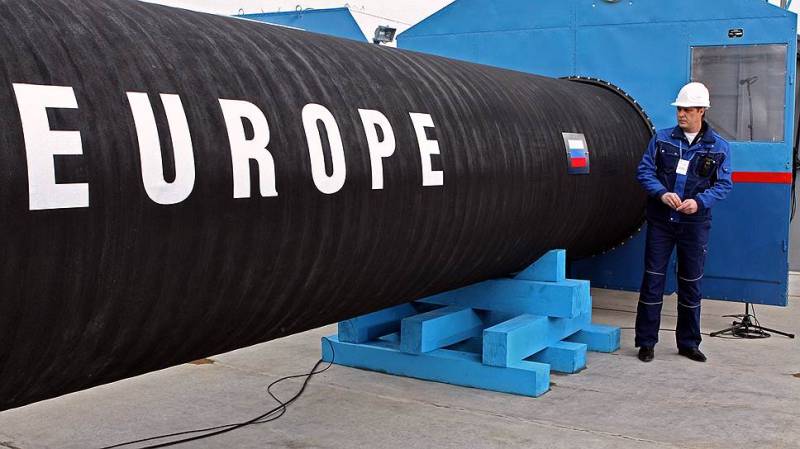 These two mutually exclusive events rather vividly demonstrated that Europeans had not only a single position on gas supply to the alliance countries, but even a basic understanding of the obvious economic benefits and awareness of all the risks involved.

In Kiev, they tried to look beyond the horizon of 2019 of the year, when the contract between Naftogaz of Ukraine and Gazprom for the transit of Russian gas expires. The future was seen by the participants of the Gas Forum as a continuation of the present: “blue fuel” runs to Europe across the expanses of Ukraine, filling the Ukrainian treasury with the currency it needs.

The disputes were fought mainly on how to get to this gas-financial stream by the Europeans themselves. The topic is definitely fascinating. Especially in light of the fact that Russian Gazprom has long and seriously been talking about its intention to reduce gas transit through Ukraine to the EU to 15 billion cubic meters a year or to stop it altogether.

The experts made an analysis of the consequences of such a step by the Russian company and concluded that the profitability of the Ukrainian gas transportation system begins with the transit through it of 60 billions of cubic meters of gas per year. If the volume is less, “part of the Ukrainian CTA will have to be cut for scrap.”

You can, of course, go the other way. At the beginning of last year, for example, Ukrainians unilaterally raised the transit tariff almost three times - from 2,73 dollars per thousand cubic meters for every 100 kilometers of pumping to 7,91 dollars. The local media have already begun to consider the expected revenue for the transit of gas. It turned out that in a year it will grow from 2 to 6 billion dollars.

However, Gazprom did not agree to changes to the contract. In Europe, the “Ukrainian Wishlist”, which led to a direct rise in gas prices, did not understand either. It was necessary for Naftogaz of Ukraine to return to the conditions specified in the contract, and for internal use to launch a propaganda campaign, flavored with lawsuits in local arbitration courts.

In Europe, it is not forgotten. It is not by chance that one of the topics discussed by the Kiev Forum was the demand of EU representatives to involve a European company in the management of the gas transportation system of Ukraine. He was called "a necessary condition for the preservation of the transit of Russian gas through Ukraine." An explanation of this issue was made at the forum by the representative of the Ukrainian Support Group at the European Commission Torsten Wellert. Here is his main conclusion: "For a stable transit organization, a trusted transit operator is needed."

“Untrusted” Ukrainians actively protested, but they were nailed to the site by two new demands. In its first condition, the European side expressed its intention to conclude transit contracts not with Gazprom, but with a “trusted operator” and buy Russian gas not on the western, as it is now, but on the eastern border of Ukraine.

The second condition was the division of the Ukrainian monopolist "Naftogaz of Ukraine" into three companies - for gas production, trading and transit. So requires European legislation. Using it, EU officials have long and persistently create commercial problems for our Gazprom. Now it’s the turn of Naftogaz of Ukraine.

It is noteworthy that of all three alleged companies created on the spot of the Ukrainian monopolist, the Kiev guests from Europe are only interested in the third - on gas transit. Together with the European "trusted operator", it should ensure the implementation of all the plans that were discussed at the Third Gas Forum in Kiev, but so far they have become the subject of a Ukrainian-European compromise.

How can the European Union save 20 billion euros

This forum reminded in some way a dispute between passengers about the price of tickets and the conditions of travel on a bus that is not going to carry them. Gazprom, as we know, has completely different plans. It is building two new gas pipelines - the Nord Stream-2 under the Baltic Sea and the Turkish Stream through the Black Sea.

The “Turkish Stream” goes outside the jurisdiction of the European Union, therefore the Baltic gas pipeline has become the subject of dispute in Brussels. She, as the lawyers found out, is also not within the competence of the European Commission, since the facility is located in international waters, outside the EU.

This conclusion of the lawyers somewhat cooled the ardor of Estonia, which is now presiding over the EU. It was on her initiative that an expert council was held, discussing the construction of the Nord Stream-2 gas pipeline. Actually, Estonia itself, like other Baltic countries, is opposed in general to this construction.

A new gas pipeline is needed for Old Europe. However, at the above-mentioned meeting of the Council, Germany and its supporters were in the minority. Young Europeans crushed everyone with their activity and mass character. As a result, the European Union was not able to coordinate a single position on the Nord Stream-2 gas pipeline.

This situation is quite satisfied opponents of construction. They seriously expect that the strife in Europe and the perseverance of the Americans to move their liquefied natural gas to the continent will finally bury the plans of Russia and Germany to build a second gas pipeline along the Baltic Sea.

Experts doubt it. One of them is Daniel Fried. During the years of Barack Obama’s leadership, he was the focal point for sanctions at the US State Department, therefore, as they say, in the subject. “We had an agreement with Europe not to touch the gas sector,” Fried said in an interview with Deutsche Welle, and called the part of the American law relating to sanctions on the gas pipeline being built, “arbitrary and not mandatory.”

The fact is that the US administration can only apply sanctions against Nord Stream-2 only in coordination with its allies. According to Fried, after consultations between Europeans and US lawmakers, this provision became a mandatory requirement of the law. Therefore, “if the deal (on the construction of Nord Stream-2” - ed.) Falls apart, either because it will be considered inappropriate to European energy policy, or the Europeans will change their mind, ”said Daniel Fried in an interview.

Fried did not touch the economic reasons. It is the prerogative of the Europeans. They have already counted everything along and across and have come to a disappointing conclusion for the opponents of the gas pipeline. This is how it looks in the study of the analytical center of the Institute for the Study of Energy Economics at the University of Cologne.

“We calculated various scenarios,” says Harald Häcking, director of the center and head of research. “Even if the demand for LNG is moderate and world prices for it are relatively low, European consumers, if Nord Stream-2 is commissioned, will save almost 2020 billion euros in gas imports on 8 during the year. If the demand and prices for LNG turn out to be high, then the EU countries ’28 savings will amount to a billion euros thanks to this 24 pipeline.”

Heckking assumes that the cost of Russian gas from Nord Stream-2 will be substantially (at least 30 percent) lower than that of natural gas. After all, gas from the Baltic pipeline is even cheaper than Ukrainian transit. Today, the cost of pumping thousands of cubic meters of gas per 100 kilometers of Nord Stream does not exceed the 2,1 dollar (compare with the Ukrainian tariff of the 2,73 dollar and Kiev’s desire to get even more).

The calculations of economists and analysts have not yet cooled the hotheads of Eastern Europeans, carried away by intrigues against Russia. Experts are confident that with time the situation will change. At least because with the release of Britain from the EU, the community budget is seriously reduced. The subsidies with which opponents of the gas pipeline being built are now patching their budget holes will be less.

Under these conditions, 20 billion euros, of which Harald Hacking speaks, should become the weight on the economic balance of the European Union, which will outweigh the political predilections of opponents of laying the new Baltic pipe. Let's hope that the experts are not mistaken in this assessment.

Ctrl Enter
Noticed a mistake Highlight text and press. Ctrl + Enter
We are
Do not be afraid, Europe, we will not leave without gas!2019 problem of the year
6 comments
Information
Dear reader, to leave comments on the publication, you must to register.