How did the Turks appear

October 18 2017
57
History the settlement of Asia Minor by the Turks goes back to the conquests of the Seljuk Turks. The Seljuks were one of the branches of the Oguz Turks who lived until the 10th century in the steppes of Central Asia. A number of scientists believe that the Oguzes were formed in the steppes of the Aral Sea region as a result of the mixing of the Türkic (tribes of the Turkic Kaganate) with the Sarmatian and Ugric peoples.


In the 10th century, part of the Oguz tribes moved to the south-east of the Aral Sea region and became vassals of the local Samanid and Karakhanid dynasties. But gradually, the Oghuz Turks, taking advantage of the weakening of the local states, created their own state formations - the Ghaznavid state in Afghanistan and the Seljuk state in Turkmenistan. The latter became the epicenter of the further expansion of the Oguz Turks, also called the Seljuks, to the west - to Iran, Iraq and further to Asia Minor. 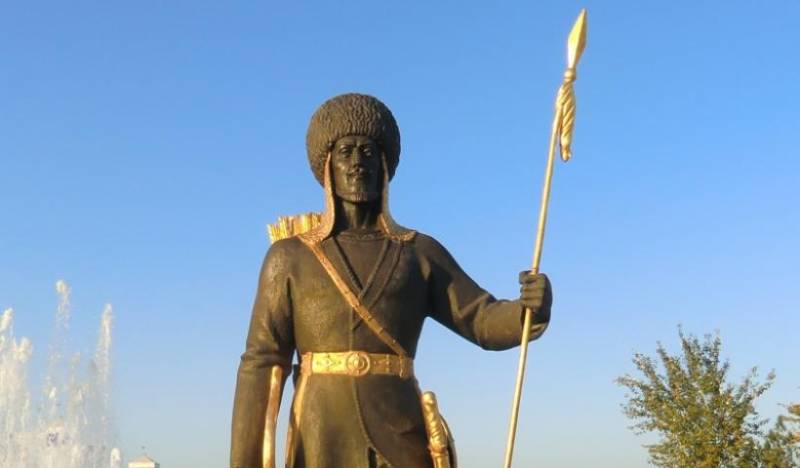 The great migration of Seljuk Turks to the west began in the 11th century. It was then that the Seljuks, led by Togrul Bek, moved on to Iran. In 1055, they captured Baghdad. Under the successor of Togrul Bey, Alp Arslan, the lands of modern Armenia were conquered, and then the Byzantium troops were defeated at the Battle of Manzikert. Between 1071 and 1081 virtually all of Asia Minor was conquered Oguz tribes settled in the Middle East, giving rise not only to the Turks proper, but also to many modern Turkic peoples of Iraq, Syria and Iran. Initially, the Türkic tribes continued to engage in nomadic cattle breeding that was usual for them, but gradually they were mixed with the autochthonous peoples living in Asia Minor.

By the time of the invasion of the Seljuk Turks, the population of Asia Minor was incredibly motley in ethnic and confessional terms. Numerous peoples lived here, for thousands of years forming the political and cultural image of the region.

Among them, a special place was occupied by the Greeks - the people who played a key role in Mediterranean history. The colonization of Asia Minor by the Greeks began in the ninth century. BC e., and in the Hellenistic era, the Greeks and the Hellenized aboriginal peoples made up the majority of the population of all coastal regions of Asia Minor, as well as its western territories. By the eleventh century, when the Seljuks invaded Asia Minor, the Greeks inhabited at least half of the territory of modern Turkey. The most numerous Greek population was concentrated in the west of Asia Minor - the coast of the Aegean Sea, in the north - on the Black Sea coast, in the south - on the Mediterranean coast all the way to Cilicia. In addition, an impressive Greek population lived in the central regions of Asia Minor. The Greeks professed Eastern Christianity and were the main pillar of the Byzantine Empire.

Perhaps the second most important people after the Greeks of Asia Minor before the conquest of the region were the Turks Armenians. The Armenian population prevailed in the eastern and southern regions of Asia Minor - on the territory of Western Armenia, Little Armenia and Cilicia, from the shores of the Mediterranean Sea to the south-western Caucasus and from the borders with Iran to Cappadocia. Armenians also played a huge role in the political history of the Byzantine Empire; there were many notable families of Armenian origin. From 867 to 1056 in Byzantium, the rule was the Macedonian dynasty, which was of Armenian origin and also called by some historians the Armenian dynasty.

The third large group of peoples of Asia Minor to the X-XI centuries. There were Iranian-speaking tribes that inhabited the central and eastern regions. These were the ancestors of the modern Kurds and kindred peoples. Much of the Kurdish tribes also led a semi-nomadic and nomadic way of life in the mountainous regions on the border of modern Turkey and Iran.

In addition to the Greeks, Armenians and Kurds, Georgian people also lived in Asia Minor in the northeast, Assyrians in the southeast, a large Jewish population in the major cities of the Byzantine Empire, and the Balkan people in the western regions of Asia Minor.

The Seljuk Turks invading Asia Minor initially retained tribal division characteristic of nomadic peoples. To the west, the Seljuks moved in the usual manner. The tribes included in the right flank (bouzouk) occupied more northern territories, and the tribes of the left flank (uchuk) - more southern territories of Asia Minor. It is worth noting that along with the Seljuks, the farmers who joined the Turks came to Asia Minor, who also settled on the lands of Asia Minor, creating their own settlements and gradually tyukizirovshis being surrounded by Seljuk tribes. The settlers occupied mostly flat areas in Central Anatolia and only then moved westward to the Aegean coast. Since most of the Turks occupied the steppe lands, the mountainous areas of Anatolia largely preserved the autochthonous Armenian, Kurdish and Assyrian population. 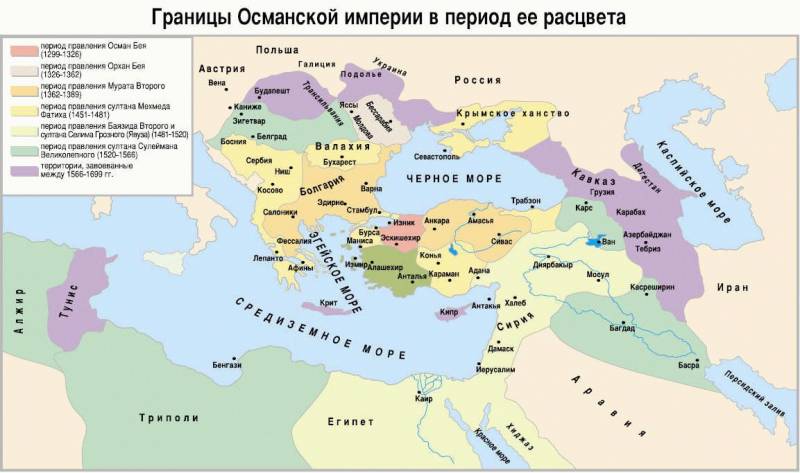 The formation of a single Turkish nationality on the basis of numerous Turkic tribes and the autochthonous population assimilated by the Turks took a long time. It was not completed even after the final liquidation of Byzantium and the creation of the Ottoman Empire. Even within the Turkic population of the empire, there were several groups that were very different in lifestyle. Firstly, these were actually nomadic Turkic tribes, who did not hurry to abandon their usual forms of economic activity and continued to engage in nomadic and semi-nomadic cattle breeding, mastering the plains of Anatolia and even the Balkan Peninsula. Secondly, it was the sedentary Turkic population, including the farmers of Iran and Central Asia, who came along with the Seljuks. Thirdly, it was the assimilated autochthonous population, including Greeks, Armenians, Assyrians, Albanians, Georgians, who accepted Islam and Turkic and gradually mixed with Turks. Finally, the fourth group was constantly replenished at the expense of immigrants from the most diverse peoples of Asia, Europe and Africa, who also migrated to the Ottoman Empire and were turkised.

According to some data, from 30% to 50% of the population of modern Turkey, considered to be ethnic Turks, are in fact Islamic and Turkic representatives of the autochthonous peoples. Moreover, the figure in 30% is voiced even by nationalist-minded Turkish historians, while Russian and European researchers believe that the percentage of autochthons in the composition of the population of modern Turkey is much higher.

Throughout its existence, the Ottoman Empire crushed and dissolved various peoples. Some of them managed to preserve their ethnic identity, but most of the assimilated representatives of numerous ethnic groups of the empire finally mixed with each other and turned into the foundation of the modern Turkish nation. In addition to the Greek, Armenian, Assyrian, Kurdish population of Anatolia, the Slavic and Caucasian peoples, as well as the Albanians, were very numerous groups that participated in the ethnogenesis of the modern Turks. When the Ottoman Empire extended its power to the Balkan Peninsula, under its control were vast lands inhabited by Slavic peoples, most of whom were Orthodox Christians. Some of the Balkan Slavs - Bulgarians, Serbs, Macedonians - chose to adopt Islam in order to improve their social and economic situation. Whole groups of Islamized Slavs have formed, such as Bosnian Muslims in Bosnia and Herzegovina or Pomaks in Bulgaria. However, many Slavs who converted to Islam simply dissolved in the Turkish nation. Very often, the Turkic nobility took as wives and concubines Slavic girls, who then gave birth to the Turks. Slavs constituted a significant part of the Janissary army. In addition, many Slavs individually converted to Islam and transferred to the service of the Ottoman Empire. 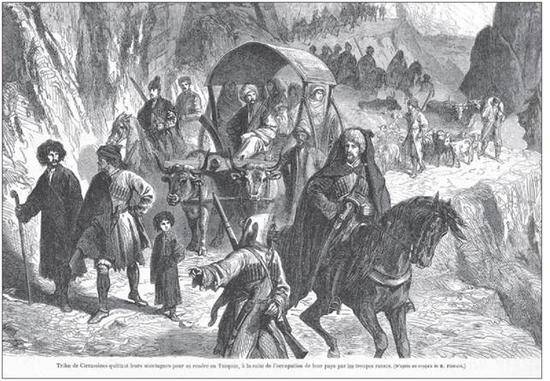 The presence of Caucasian peoples in Anatolia significantly increased after the Caucasian War, when many thousands of Adyghe-Circassian, Nakh-Dagestan and Turkic peoples of the North Caucasus moved to the Ottoman Empire, not wanting to live in Russian citizenship. Thus, numerous Circassian, Abkhaz, Chechen, and Dagestan communities formed in Turkey, which became part of the Turkish nation. Some groups of Muhajirs, as settlers from the North Caucasus were called, retained their ethnic identity up to the present, others almost completely dissolved in the Turkic environment, especially if they themselves initially spoke Turkic languages ​​(Kumyks, Karachays and Balkars, Nogai, Tatars). 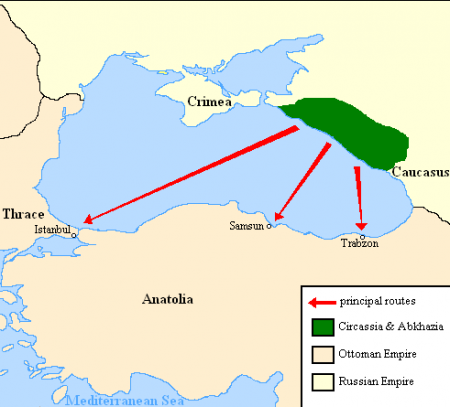 At full strength, the militant Ubykhs, one of the Adyg tribes, were resettled to the Ottoman Empire. Over the century and a half that has passed since the Caucasian War, the Ubykhs completely dissolved in the Turkish environment, and the Ubykh language ceased to exist after the death of the last carrier, Tevfik Esenc, who died in 1992 at the age of 88 years. Many prominent state and military leaders of both the Ottoman Empire and modern Turkey were of Caucasian origin. For example, Marshal Berzeg Mehmet Zeki-Pasha was Ubykh by nationality, Kabardin was one of the military ministers of the Ottoman Empire, Abuk Ahmedpasha.

During the XIX - early XX centuries. Ottoman sultans gradually resettled numerous groups of Muslim and Turkic populations from the outskirts of the empire, especially from regions where the Christian population prevailed, to Asia Minor. For example, in the second half of the 19th century, the centralized relocation of Muslim Muslims from Crete and some other islands to Lebanon and Syria began - the sultan was worried about the security of Muslims who were surrounded by Greek Greek Christians. If in Syria and Lebanon such groups retained their own identity due to large cultural differences from the local population, then in Turkey itself they rapidly dissolved in the environment of the Turkic population, also joining the unified Turkish nation.

After the proclamation of the independence of Greece, Bulgaria, Serbia, Romania, and especially after the First World War and the collapse of the Ottoman Empire, the displacement of the Turkic and Muslim populations from the countries of the Balkan Peninsula began. So-called exchanges of population, the main criterion of which was religious affiliation. Christians were evicted from Asia Minor to the Balkans, and Muslims from Balkan Christian states to Asia Minor. Not only the very numerous Balkan Turks were forced to relocate to Turkey, but also groups of Slavic and Greek populations who professed Islam. The Greco-Turkish exchange of population 1921 of the year was the most large-scale, as a result of which the Muslim Greeks moved to Turkey from Cyprus, Crete, Epirus, Macedonia and other islands and regions. Similarly, the resettlement of Turks and Islamized Bulgarians - Pomaks from Bulgaria to Turkey took place in a similar way. The communities of Greek and Bulgarian Muslims in Turkey assimilated rather quickly, which was facilitated by a great cultural closeness between the litters, the Muslim-Greeks and the Turks, the presence of a long history and cultural ties.

Almost simultaneously with exchanges of the population, numerous groups of new wave of Muhajirs began to arrive in Turkey - this time from the territory of the former Russian Empire. The establishment of Soviet power was very ambiguously perceived by the Muslim population of the Caucasus, the Crimea and Central Asia. Many Crimean Tatars, representatives of the Caucasian peoples, peoples of Central Asia, preferred to move to Turkey. There were also immigrants from China - ethnic Uigurs, Kazakhs, Kyrgyz. These groups also partly became part of the Turkish nation, partly - they retained their own ethnic identity, which, however, is increasingly “eroded” in the conditions of living among ethnic Turks.

Modern Turkish legislation considers Turks to all those born from a father - a Turk or a mother - a Turkish woman, extending the concept of "Turks", thus, to the progeny from mixed marriages.

Ctrl Enter
Noticed a mistake Highlight text and press. Ctrl + Enter
We are
Armament of the Turks of the Early Middle Ages (Part One)The myth of the "Mongol-Tatar" invasion
57 comments
Information
Dear reader, to leave comments on the publication, you must to register.