What is behind the "aggressiveness" of Israel in Syria

October 18 2017
158
So, the situation in the Middle East is "spinning" rapidly. Terrorism, which the region has long been famous for, is suffering defeat on all fronts. Questions that nobody even wanted to talk about a year or two ago are starting to be decided today. And solved quickly enough. In Astana, it has become customary to see sworn enemies at the same table. People who were tired of the war on both sides began to think not only about their own claims against the enemy, but also about the claims of the enemy against them. And it costs a lot. 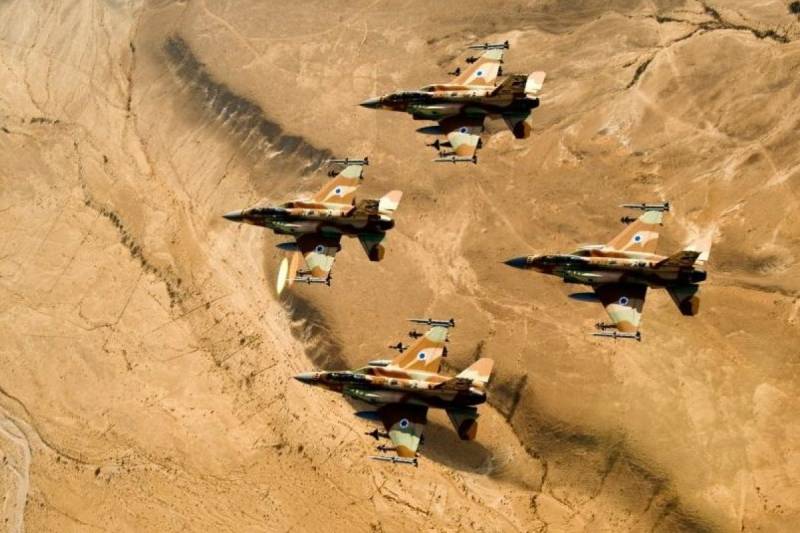 But there is a state that in this situation can lose a lot. And geographically, and in the moral and political terms. I write about Israel. Many readers wonder why Israel strikes Syrian positions today? Why, for example, the Syrian C-200 battery was destroyed? Destroyed just like that. There was no particular military need for this. Meanwhile, the battery, if you look at the map, was just 50 km from Damascus.

And then another question. Why did Israeli political and military leaders visit Moscow? I have the impression that the Israelis are now flying this route "to work". What for? What did the Kremlin need of the Jewish state? Yes, and those with whom Israeli leaders meet, obviously not engaged in the economy. In particular, on Monday in Moscow met the heads of the military departments, Sergei Shoigu and Avigdor Lieberman.

The meeting itself is interesting because Russia and Israel are on opposite sides of the barricades in the events in the Middle East. We support President Assad, while Israel actively supports those who seek his overthrow. And even now, I cited the example above, spoiling the petty Syrian army. Why small?

Yes, simply because for the Syrian army the destruction of the same battery is unpleasant, but not critical. President Assad is well aware that the Israelis will not go further. Then they will have to face the Russian C-400. For Russia, such attacks are also more like mosquito beeps. Beeps mosquito. It is unpleasant to listen. But, it is worth trying to bite a mosquito, for his life no one will give even a broken penny. Slam.

Moreover, on Monday, Sergei Shoigu during a meeting with Lieberman announced the imminent completion of the operation in Syria. "I would like to separately discuss everything related to Syria. The operation there is coming to an end. There are several points that require urgent solutions and require discussion of the prospects for further development of the situation in Syria." So what's the deal? What does Israel need from Moscow today?

The answer to this question was also voiced in the statement of the Russian Minister of Defense: "Apart from the questions of our military and military-technical cooperation, of course, the main and main question is related to the fight against terrorism and the situation in the region." And I would pay particular attention to the last words. On the situation in the region. Let's try to understand the distribution of power today.

What is happening now on the line of contact between the Syrian army and the militants reminds the press. Assad is pressing the terrorists towards Idlib. "Moderate", realizing this, go to the negotiations and gradually out of the war. The rest, the most odious and warlike, the Syrian army gather in a heap, for complete destruction in one place.

This is a rational grain. Why spray power and money if you can strike with a fist? Some analysts today are talking about the support of US militants. I do not argue, such support exists. This was repeatedly stated by our Ministry of Defense. And not only stated, but also led the facts of such support.

However, it is already clear that the US influence in the region is falling. And stop this fall is almost impossible. The only option for America is to completely, by 100%, change its views on Syria. Recognize the legitimacy of the election of Assad and the government in Damascus. What, of course, Trump just can not do. With all their desire.

But back to Israel. To the origins of the Israeli policy towards Syria. Those attacks that Israel periodically inflicted earlier, were made just in the interests of the United States. The Western coalition for the Jewish state was the only option for its own security. Many have forgotten, but Syria and Israel are still in a state of war. From 1948 year! Many have forgotten that in 1967, Israel occupied the Golan Heights and annexed them in 1981.

In addition, it seems to me, the Israelis did not want to "stay with their own" after the defeat of the Assad army by the Americans. Very much they wanted to get their own gesheft after dividing Syria into zones of influence. Jerusalem never spends its own shekels just like that. Jewish practicality has become the talk of the town.

In principle, everything would have happened, did not interfere in the Syrian war, Russia. And the two years that the Russian operation has been going on have radically changed the alignment of forces in the region. Today, Israel can no longer boast the strength of its own army. No, no one detracts from the opportunities of the Israelis. Just the possibility of opponents have increased significantly.

The Syrian army two years ago and the Syrian army today are two completely different armies. This also applies to the Iranian army. Well-armed and "modernized" with the help of Russia, the army with many years of combat experience, motivated and evil. And most importantly, the army, which remember their defeat in the year 1967. Jerusalem is well aware that the responsibility for the sacrifices made by Syrian families during the civil war also lies with Israel. It was Israel that supported the terrorists. But there is also Lebanon. The 1982 war of the year was not forgotten there either. And Iraq remembers everything.

Assad today does not state his intentions regarding Israel. The liberation of the country must be completed. And Iran? Hassan Rouhani does not hide his desire to destroy the Jewish state as such. And this is the official position.

I do not think that after the destruction of the terrorists, Iran and Syria will disband their own armies. But you can not keep them idle. Everyone understands that in this case any excesses are possible. A soldier must either fight or go home. Restore destroyed by war. Assad and Rouhani will not go to reduce the army. Just because such a reduction will give the terrorists who are hiding today the opportunity to re-launch the booze. And they do not need to look for the enemy. And the troops do not need to motivate. Here it is, the enemy!

A gloomy deal for Israel? Alas, gloomy, but not critical. Considering the remaining "attendant factors." At the beginning of the article I did not just talk about the frequent trips to Moscow. The Israeli leadership is starting to play another card today. This game fits perfectly and completely unnecessary to anyone air strikes.

Recall Astana. Who is represented in the negotiations there? And, most importantly, who is not there! But Israel is not there. From the word not at all. This means that Jerusalem is excluded from the list of those who decide the fate of the region. Consequently, for the regional policy of this state is not. With all the consequences. That is why Israel’s “aggressiveness” has emerged. “Hey, we are fighting too. We are also a significant military force that can ignite the Middle East. So we must also decide the fate of the region. Quickly move over and give us a chair at your table!”. Like that.

And who can "put in a word" for the Jews in Astana? Well, about Syria and Iran is understandable. Turkey? Well yes. Especially after the Israelites quarreled with Erdogan in tatters. USA? So Americans can not protect their own interests in the region. Not Israel until today. "The case smells like kerosene." How would the United States not fly out of the Middle East. So who remains?

It is clear that we will not allow the destruction of Israel. We are not only Russia, but also other countries. The Jewish state took place, it was suffered by the people. And from the point of view of big politics, today everyone needs it. About the balance of power, no one forgets. Israel is a counterweight to the Arab states. No matter what we say about Iran, the strengthening of Tehran’s position is obvious today. After the victory in Syria, the position of Damascus will also increase. And in perspective, we can get a rather serious coalition of Arab states. And there ... The East is a dark matter.

What is happening today at the top, says only one thing. Moscow leads its party very rationally and with a long-range sight. We are gradually becoming necessary not only for Arabs, but also for Israelis. And the Turks. And this means that the plans of the West to organize the blockade of Russia fail. The west remains in the west. And there we can handle.

No wonder Israeli politicians are coming. Oh, no wonder. Moscow will again become the savior of Israel. The initiator of the creation were. Now we will also be saviors. One important question remains. What to do with the annexed Golan Heights? Will we be able to influence Damascus and Tehran, or not? Honestly, I'm not sure about that. So, not sure about the preservation of peace in this region. But this is a private opinion about which one can argue ...

Ctrl Enter
Noticed oshЫbku Highlight text and press. Ctrl + Enter
We are
Bashar al-Assad: Captain does not run from the ship"Israel is a big pain in America’s ass"
Military Reviewin Yandex News
Military Reviewin Google News
158 comments
Information
Dear reader, to leave comments on the publication, you must to register.