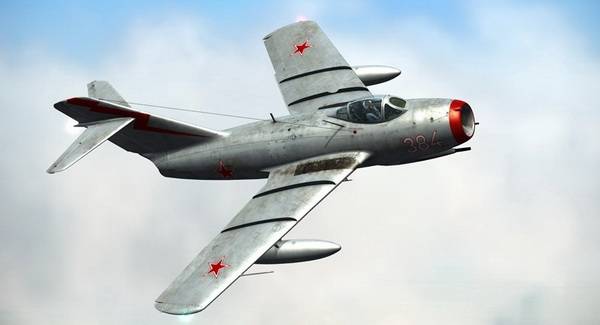 The second time the war recalled itself in 1950. On the Korean Peninsula, large-scale hostilities unfolded between North Korea, China, supported by the Soviet Union, and the pro-American South Korean regime, which the United Nations led by the United States. At that time, Vladimir Sergeyevich served in the North Caucasus, was a mechanic of the latest for those times Soviet fighter MiG-15. He was offered to go on a business trip. The proposal itself was constructed in such a way that it did not imply a refusal. Yes, he did not think to refuse. We drove in an ordinary passenger train, dressed in civilian clothes. Brought to Transbaikalia, in Chita. Here they stayed a month. We studied the Chinese language. The captain still remembers him. They were also told about the customs and traditions of the Chinese and Koreans ...

After completing the training, the military unit was transferred to China. Often changed locations. In the border of Antoun, which stands on the banks of the Yalu River, a hydroelectric power station and a railway bridge were covered. Our planes flew with the identification marks of the Chinese Air Force, and the servicemen were dressed in Chinese military uniforms and stationed in the barracks of their army. The fact is that our military posed as Russians living in China. Then there were more than 600 thousand.

Despite powerful weapons, “flying fortresses” were effectively lost by our MiGs.

The daily routine was compressed like a spring. Often had to rest no more than two hours a day. True, they fed well.

Flights took place at any time of the day. Our planes were in the air 24 hours a day - constantly had to take off at the interceptions of the American "flying fortresses" and "Sabre". Sometimes MiGs returned to the base riddled with machine gun bursts. Had to undock the wings, parts of the fuselage. While the plane was being repaired, the pilot received a new fighter and again went into battle. True, aviators preferred to fly only on "their" aircraft. Each MiG had its own individual characteristics - its own “character”.

However, not everything was solved only by technology. Much depended on people. Vladimir Sergeevich notes that war especially mobilizes human capabilities. And he can give quite a few such examples ...

Americans often bombed Soviet airfields aviation. Before this, saboteurs and scouts usually landed, they were helped by agents recruited among the Chinese. They pointed to targets for bombing attacks. Vladimir Sergeyevich says that they practically did not have to live in the barracks. All the time in shelters at aircraft, at a depth of 5 meters.

The effectiveness of American strikes on airfields was low, as the American strategic bombers B-29 bombed from high altitudes using radar sights. Crews could not see whether the bombs hit the target, for fear of running into anti-aircraft guns. In addition, our aircraft did not leave such flights unpunished. Despite the powerful weapons, the “flying fortresses” were effectively lost by our MiGs. Sometimes after the attacks of the MiG-15 B-29 just collapsed in the air. As Kapitansky remembers, B-29 dumped containers with huge green flies. Hundreds of thousands of released beasts spread various infectious diseases.

Our pilots and technicians have done a lot to prepare the aircraft of North Korea and China. They relocated very often, so sometimes they didn’t even know where they were - in Korea or in China. From place to place flew vehicles on transport aircraft or traveling by truck. And here it came from the Americans - they bombed car columns, and American saboteurs were also disturbed. In this war, the concept of front and rear was relative.

With the signing of the armistice agreement, our specialists returned home. Nearly six and a half decades have passed since the end of the Korean War, but its soldiers still cannot forget about it. For a long time they were also depressed by the fact that everything was covered with the darkness of secrecy. And only in the middle of the 1990-ies "Koreans" were allowed to speak.