Russian military in Abkhazia will work defensive actions in the mountains

October 16 2017
22
Soldiers of the Russian base in Abkhazia at the Tsabal training ground are practicing defense actions in a mountainous and wooded area during a company tactical exercise (MOUT) with combat shooting, reports press office Southern District. 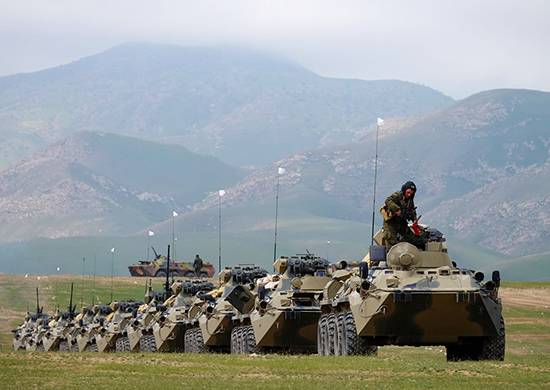 “The units of the compound were raised by alarm and secretly advanced on standard military equipment in the designated area. On the march, the military solved the tasks of repelling attacks aviation and the destruction of sabotage and reconnaissance groups of the conditional enemy, ”the release said.

During the exercise, special attention will be paid to the “fortification equipment of the company’s support station, the creation of engineering barriers and the organization of a fire system”.

In conjunction with tank and artillery units, motorized rifles will hit about 1000 targets that mimic aviation, armored vehicles and manpower of a conditional enemy,
added to the press service.

The event is planned. It employs about 500 military personnel, up to 100 units of military equipment, including the BTR-82AM, Dozor armored reconnaissance vehicles and Grad rocket launchers based on Ural vehicles.

Ctrl Enter
Noticed a mistake Highlight text and press. Ctrl + Enter
We are
Sudden verification of the combat readiness of the Northern Fleet, ZVO and Airborne TroopsCamp gathering of intelligence officers of the Russian military base in Abkhazia began at the mountain training complex Tsabal
22 comments
Information
Dear reader, to leave comments on the publication, you must to register.