October 17 2017
7
At the very beginning of the forties, the German army launched a program whose goal was to create a new single machine gun. The existing MG 34 product had a number of positive features, but did not fully meet modern requirements. According to the results of the program, the MG 42 machine gun was adopted, while it was abandoned from other developments. One of the contenders for getting into the army could be a machine gun designed by August Coenders.


German designer of Dutch origin A. Coenders participated in the development of various samples of artillery and small weaponsduring which he proposed a number of original ideas. In the thirties, the gunsmith moved to Röchling'sche Eisen und Stahlwerke GmbH, where he again took up the design of new systems. At the very beginning of the forties, a group of engineers led by A. Coenders created several new projects. One of them offered the construction of a promising machine gun with increased firepower.

Unfortunately, very little is known about the works of A. Koders. There is information about the development of a number of samples of small arms of different classes, but detailed information about the products created is most often not available. Moreover, the lack of information sometimes led to curious results. Thus, due to the lack of marking and documentation, an experienced submachine gun, created by Röchling'sche Eisen und Stahlwerke, was for some time considered an ERMA development. Nevertheless, in the future it was possible to establish the real origin of this sample and, as they say, to restore justice.

Basic information about several of Röchling'sche Eisen und Stahlwerke's developments has become known thanks to one of its former employees. More recently, Heinz-Kurt Schmidt, who worked with A. Coenders in the early forties, published several photos from his personal archive, and also read out some information about the weapons that existed. Some of the details have not been published, but the information obtained has significantly clarified the situation.

It is known that the A. Koders machine gun was developed in the early forties and, possibly, could get into the army tests. The Wehrmacht and other structures of Nazi Germany at that time wanted to get a new machine gun with the main characteristics at the level of the existing MG 34, but devoid of its main flaws. The project of A. Koenders could be submitted to the appropriate competition.

According to reports, in the framework of the original project was made only one experienced machine gun, intended for testing. The results of inspections at the shooting range could have some influence on the further development of the project, after which the creation of new prototypes was not ruled out. However, they did not appear for unknown reasons.

As follows from the well-known information, the goal of the next project, authored by A. Koenders and his colleagues, was to create a promising machine gun for a standard German rifle cartridge 7,92х57 mm, which differs from serial samples with increased rate of fire. Whether the task was to simplify the design and improve performance is unknown. Anyway, the weapon should not have been particularly complex.

From the point of view of layout, the machine gun did not differ from other samples of its class. The main weapon unit was a rectangular receiver with mounts for other devices. A barrel and a cylindrical casing of a gas chamber were attached to its front wall. On the back wall were means of mounting the butt. Next to the latter, on the bottom of the box, there was a pistol grip for controlling the fire.

The stem box of an experienced machine gun was distinguished by a sufficiently simple design. It was made in the form of a unit with a rectangular section. Its front part differed in smaller height. On top of the box was closed rocking lid. The latter was fastened with a front hinge and rear latch. As far as can be judged by the available materials, the cover should have been reclined only when servicing the weapon.

The machine gun of A. Koenders was proposed to be completed with a relatively long rifled barrel of the caliber 7,92 mm. The barrel was installed in the front of the receiver with the help of detachable fasteners, which allowed you to quickly replace the heated barrel during the battle. On the left side of the weapon, near the chamber, there was a large swing arm. Apparently, it was with his help that it was proposed to control the mountings of the trunk.

The machine gun received automation using powder gases discharged from the barrel. Directly above the breech breech was a large cylindrical housing that served as a gas chamber. At the same time, the gas outlet was located at a minimum distance from the chamber, which, apparently, could speed up the recharging process to a certain extent. The type of piston used is unknown. Probably, a system with a short piston stroke was applied, using an existing rod that pushed the bolt group.

The receiver box accommodates a movable bolt carrier with a set of appropriate devices. The operating principles of the shutter and the method of locking are unknown. A return spring and a firing mechanism should be placed behind the bolt. Apparently, the latter did not have a single shooting mode. Fire control was carried out using the trigger of a traditional design. There was a fuse blocking the descent.

A. Koenders' machine gun was supposed to use tape ammunition. Cartridges 7,92x57 mm were proposed to be placed in a standard canvas tape and stored in existing metal boxes. In preparation for shooting, a tape with cartridges was inserted into the weapon through a rectangular receiver on the left wall of the receiver. Empty tape was thrown through a smaller window on the right side. The sleeves probably should fall down.

An experienced machine gun differed fairly simple execution. In particular, he did not have any sights. On the cover of the receiver there were certain protrusions or niches necessary for the correct placement of the internal parts of the weapon, but the scope was not installed. Thus, the prototype could fire only in a given direction, without targeting a specific target. Probably, in the course of further development, the weapon could get an open mechanical sight. In this case, the fly would have to be placed on the rack, compensating for the difference in the height of the barrel and the receiver cover.

The product is equipped with a fairly simple pistol grip assembled from a central metal element and a pair of wooden overlays. There was a trigger guard in front of the handle. Butt performed in the form of a rigidly fixed tube, which served as the basis for the vertical plate of the shoulder rest. The use of bipods on the prototype was not intended.

According to reports, in terms of the dimensions of the machine gun, Augustus Koenders was almost the same as the MG MGNNX serial army and the MGNNXX future MG. However, he had significant advantages in basic characteristics. Due to the correct selection of automatic parameters, gunsmiths managed to get the highest rate of fire. As wrote H.-K. Schmidt, an experienced machine gun could do up to 34-42 shots per minute. For comparison, the MG 2200 machine gun, depending on the modification, showed a firing rate of no more than 2400-34 rounds per minute.

It can be assumed that the only known prototype of the machine gun A. Coenders was made in the early forties, and soon went to the shooting range for testing. Probably, it was precisely at the test site that the high design characteristics of the rate of fire were practically confirmed. In addition, during testing, the experts had to identify other advantages and disadvantages of the product.

What conclusions were drawn from the test results is unknown. However, further events, as well as a shortage of information, allow us to draw certain conclusions. Everything suggests that after one or another test phase, the work on the new project was discontinued. The machine gun did not show the desired results, or did not suit the potential customer. As a result, the further development of weapons did not make sense. 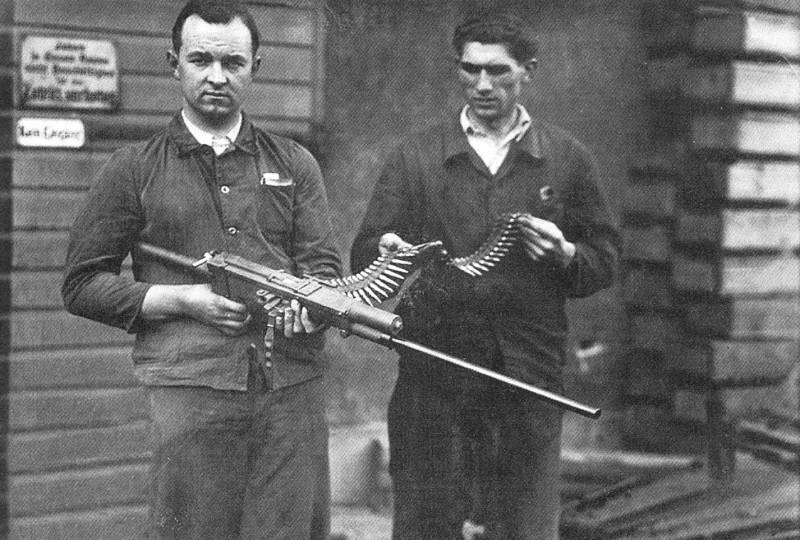 Information about the future of the only prototype is missing. Apparently, after the completion of the work, it was disposed of as unnecessary. It could also be destroyed at the final stage of the war, when the territory of the company Röchling'sche Eisen und Stahlwerke became a battlefield. Anyway, an experienced machine gun was not preserved. Now you can see it only in two photos.

Having certain information about the original German development, it is possible to make certain assumptions and conclusions. These assumptions can help determine the causes of project failure. However, this is only an attempt to establish a real course of events based on a few known data, which leads to known problems.

There were no revolutionary new solutions in the design of the A. Koenders rapid-fire machine gun; it was based solely on well-known principles. This could to some extent simplify production and operation. At the same time, the correct calculation of components allowed to bring the rate of fire to record values. One can imagine what would be the results of the use of such weapons on the battlefield, both in the role of a heavy machine gun, and as a weapon of armored vehicles.

At the same time, a high rate of fire in practice could be a serious disadvantage. A standard 50 canvas ribbon would only last for 1-1,5 seconds of continuous firing, after which a relatively long reload was required. All this could seriously impede the use of a machine gun in practice, as well as hit on its real effectiveness.

It should also be noted the inability of fabric machine-gun belts for use in systems with high rate of fire. It cannot be ruled out that during the tests, the means of supplying the machine gun showed themselves to be the worst: the insufficient rigidity of the tape could lead to incorrect feeding of cartridges and delays in shooting. Replacing the canvas tape with a metal one, in turn, would require reworking a part of the machine gun devices.

In the proposed form, the A. Koders machine gun could have serious problems that could adversely affect its real potential. Thus, in the initial configuration, he was not of interest to the army, which could be the main prerequisite for the well-known end of the project. The weapon could not interest the potential operator, and the lack of a real order led to a halt in operations. Later, no one needed experienced machine gun ceased to exist. Now it can be seen only in two surviving photographs.