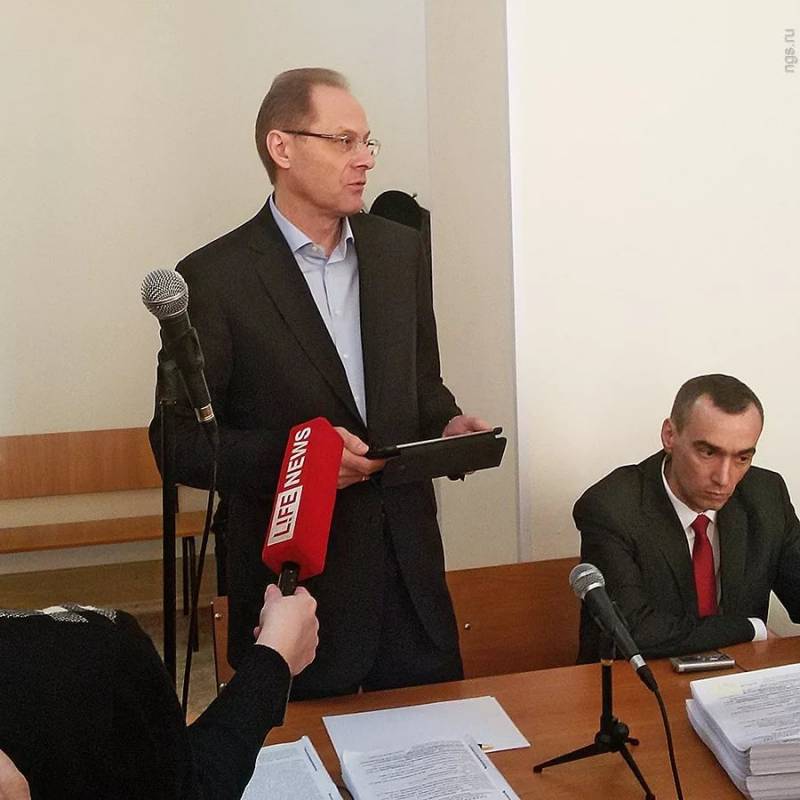 During the unauthorized 7 rally of October this year by supporters of Alexei Navalny in Novosibirsk, observers drew attention to the poster “Freedom to Yurchenko!”, Which for some time hung among the participants.

It is still unknown whether this is a demonstrative step of Vasily Alekseevich Yurchenko himself towards the camp of a non-systemic opposition led by Alexei Navalny, or this action should be regarded as a completely independent initiative coming from colleagues.

Meanwhile, it is well known that the ex-governor himself is not in places not so remote. And court sessions on his criminal case are continuing.

Thus, to some extent, the cry “Freedom of Yurchenko!” Can be regarded, if not as an attempt to put pressure on the court, then as a way of misleading society…

Among the episodes that the investigation then began to deal with was the sale of some Novosibirsk buildings at reduced prices, the illegal transfer of land from one category to another. And it was also supposed at least inaction when stealing 152-s of millions of rubles allocated for the construction of the Industrial and Logistics Park, where the son of the ex-governor worked at one time.

Currently, the trial of one of the criminal cases continues. And only the court can decide the question of the guilt or innocence of the ex-governor.

It would seem that everything is clear?

But no: all this time, some of the Novosibirsk media did not have time to produce stories in which the activities of the former governor were presented only in a very positive way, and he positioned his person only as an “innocent victim”. It remains a mystery whether such pure activity was altruistic, or did the modest ex-governor have more money for custom materials?

The retired governor is actively supported by Sergey Boyko, a member of the Novosibirsk headquarters of Alexei Navalny.
Which, by the way, was detained on October 9 by the police and taken to the “Central” department. He is suspected of organizing an unauthorized event in Pervomaisky Square. Smartly impute art. 20.2 Code of Administrative Offenses of the Russian Federation (“Violation of the established procedure for organizing or holding a meeting, rally, demonstration, procession or picketing”). As a result, he was sentenced to four days of administrative arrest.

Of course, this event did not go unnoticed by such an active “democratic” and, of course, entirely “pro-Russian” organization like Radio Liberty.

It immediately published material relevant content. Such attention and knowledge of the details of the Novosibirsk events on the part of Radio Liberty makes one seriously assume that there is a close relationship between supporters of Navalny and this organization.

Among the active opponents of the decision of the President of the Russian Federation on the removal of Vasily Yurchenko from his post is the former head of the mass communications department of the Novosibirsk region, and now a staunch opponent of the “regime” Andrei Gladchenko, whose name quite often appears on Radio Liberty. Currently, he is directly involved in the unauthorized actions of supporters of Navalny as the head of the regional branch of the Progress Party.

Gladchenko, himself a co-organizer and active participant in such unauthorized events, was not detained by law enforcement agencies.

All of the above leads one to wonder whether it is an accident that the active advocates of Vasily Yurchenko are at the same time supporters-supporters of Alexei Navalny, who openly and aggressively rely on unconstitutional methods of political struggle?

If this is not accidental, then the conclusion inevitably follows that the PR action on the proposal of ex-Governor Vasily Yurchenko as another “victim of the repressive regime” is not only known to him personally, but also approved directly by Radio Liberty, since there materials appeared on this topic, and in a way that is invariably positive for the ex-governor.

However, there is another very piquant moment that makes you wonder: the fact is that 17 in November 2011 of the year Natalia Yurchenko, who at that time was the legal wife of the acting governor of the Novosibirsk region Vasily Yurchenko, was granted a residence permit in Austria with the number А23633513.

The opportunity to get this card exists from July 1 2011, when the immigration program was officially launched on a “ball” system. The main objective of this program was to provide opportunities for soft immigration for skilled workers from third countries and their family members who have the desire to reside and work permanently in Austria.

Obtaining a residence permit almost immediately after the introduction of this program can only say that Natalia Yurchenko and her family turned out to be very important people for the Austrian government.

What connected (or does it still bind?) At that time the family of a modest leader by no means the richest region of the Russian Federation and one of the most prosperous countries in Europe? And with what feelings he went to the podium and told about the lack of funds in the regional budget, called for full economy, knowing that his lawful spouse has such a document?

Probably, for managers of such a rank as the governor there must be some ethical moral restrictions that he must establish for himself personally, even if they are not specified in the laws.

You must admit that it is very strange to be the leader of almost 3 of millions of your fellow citizens, a significant number of whom hardly make ends meet, and at least put up with the fact that your legal wife has a residence permit in Austria. After all, as they say, you need to know and measure ...

Only this alone, if a referendum on this topic were held among Novosibirsk residents, would deprive Vasily Yurchenko of the right to hold the post of governor.

In all this stories It is not yet known whether the Novosibirsk supporters of Alexei Navalny are Sergei Boyko and Andrei Gladchenko, demanding “freedom” for Vasily Yurchenko, on their own initiative, with his approval and in agreement with Radio Liberty?

Ctrl Enter
Noticed a mistake Highlight text and press. Ctrl + Enter
We are
The governor, the mayor and deputies are preparing the success of "non-systemic opposition" in the elections in NovosibirskAbout Stalin and Khrushchev
6 comments
Information
Dear reader, to leave comments on the publication, you must to register.