Project "ZZ". Take your bribes back!

October 16 2017
29
In Russia, there is an active fight against corruption: this is even recognized by Transparency International. Putin is dispersing governors in the regions, who have shown themselves to be poor in management. As for foreign policy, the US allies are now looking in the direction of Russia. Is life getting better?


Russian news Do not leave the pages of Western newspapers. About Russia they write in Germany, Austria, Denmark, Norway, the USA and many other countries. Everyone seems to care about the future of Russia. Human rights activists also revived: having given a “warm” place in Russia in the next ranking, this time they didn’t forget to mention at Transparency International that the fight against corruption in the country is still on the right track. An amazing marvel!

The West is also worried about the unprecedented event of V. V. Putin on the personnel "purge": the president throws off the governors one after another. Positions are lost by those who have shown themselves poorly in management activities. Even those who have shown themselves to Putin "loyal" are flying. However, of course, one cannot say that these people fell into disgrace. 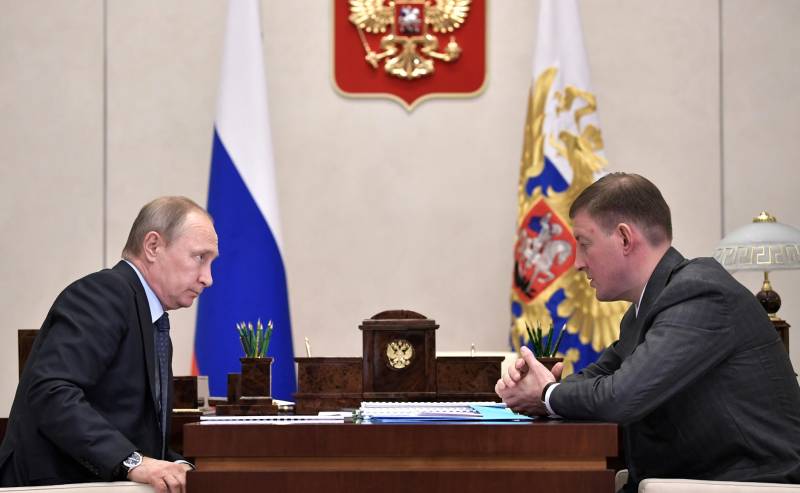 V. Putin and A. Turchak. A photo: kremlin.ru

On the eve of the 2018 election, President Putin is driving out “loyal governors,” writes Simon Kruse in a Danish newspaper. "Berlingske". The Russian president wants to show his “determination”.

41-year-old Andrei Turchak (Andrej Turtjak) is considered almost the most loyal associate of President Putin. This man stood at the head of the Pskov region with 2009. However, not a few days he said goodbye to the governor’s chair.

Mr. Turchak showed himself badly in managerial affairs: his quarrel with the local party top is known. Most importantly, this “loyal ally” is not ceased to be accused of involvement in the massacre of a journalist who was severely beaten. Such a bloody "past" could "cast a shadow" on Putin’s upcoming presidential campaign, Kruse said.

However, Mr. Turchak is not the only one who fell into disfavor. In recent weeks, Vladimir Putin has dismissed eleven governors, whose possessions stretched from the Pacific to the Baltic.

And this is not the first such initiative of the Kremlin: there were layoffs this spring. According to Kruse's calculations, about a quarter of the regional bosses were dismissed for 2017 in Russia.

The analyst links all the resignations with the March elections. Few doubt that Putin is being re-elected again. However, it is obvious that the ruling "United Russia" seeks to maximize the "purity" of victory. “Cleanliness” is important especially because the election campaign does not even have a “clear topic” that would lead Putin to the Kremlin for a new six years.

The political scientist Yekaterina Shulman speaks about the gubernatorial "purges" initiated by the Kremlin as a thoughtful political step of the authorities. “This [cleansing] gives the impression of a deliberate political step, and is an incentive for the elite; she must learn: he [Putin] cannot escape, ”Kruse quotes her interview to the Moscow Times publication.

Who in Russia is going to the place of those left behind?

This is a team of apparatchiks, the author believes. People in the regions are also appointed in the Kremlin. "Young technocrates" are sent to head the regions. These people are not at all connected with the areas that they will have to manage. Their “descent” into the regions from the Kremlin means the strengthening of the notorious vertical of power, which will ensure (as previously provided) V. Putin control over politics.

Putin's reforms have long contributed to reducing the independence of the Russian regions. Reduced cash flow management. The power of the governors was also weakening politically. Other governors even became scapegoats. In short, in the ruling party, the post of governor is apparently not considered an enviable post. Maybe this is why some “candidates” refused the proposed positions (S. Melikov is an example). As a result, "United Russia" exposes less experienced officials as "candidates".

In social networks, today they laugh at the physical similarity of newly-minted officials who have taken seats in Samara, Nizhny Novgorod and Omsk: all the Kremlin envoys are wearing glasses, all with hair combed into a side parting.

Both the competence and the benefits of such “candidates” in the election campaign remain in doubt.

By the way, one should not think that retired officials have suffered. Not at all: they got new “silent” posts. For example, the scandalous Turchak mentioned above headed the party committee in Moscow, the author points out.

While the “scandalous” people in the regions are losing their posts, the social struggle against corruption is gaining momentum in Russia.

Apparently, the cause of the struggle was a sharp decrease in bribes and offerings due to the crisis. This is the thought of the Moscow report of Per Anders Juhansen, a journalist for the newspaper "Aftenposten" (Norway).

The correspondent reports the fact: the parents handed the eighth grade teacher an envelope, and in the envelope that - money. The trouble is that the money was not enough, and the recipient of the envelope was outraged. “I was enraged,” the journalist describes her reaction. She even threatened to “test the knowledge” of the students in the class. 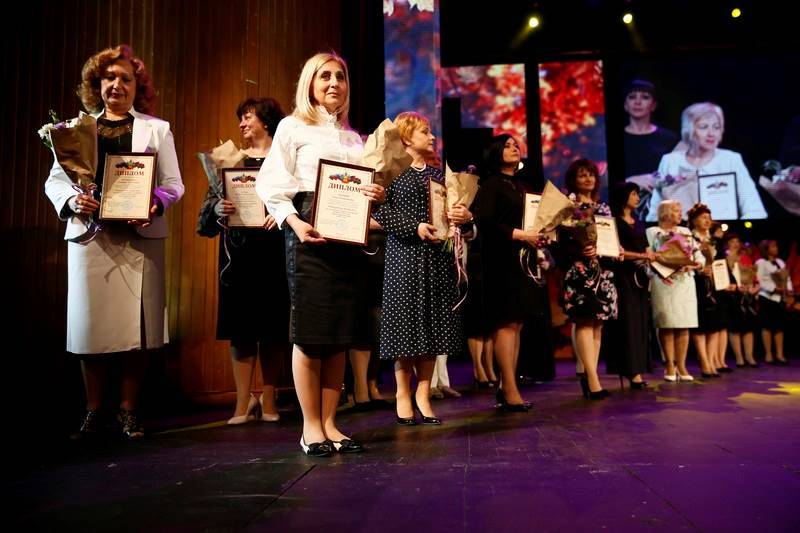 Teachers of the Krasnodar Territory on the Teacher's Day. A photo: Ministry of Culture of the region

Parents did not become silent. The chairwoman of the parental committee wrote in the Russian social network "VKontakte" that such a "gift" to the teacher seemed "humiliating and unworthy", and therefore she returned the envelope and a bouquet of flowers attached to it.

And the teacher was also crying.

Parents assumed the same two thousand rubles “to hand over” to the principal and class teacher.

Parents have decided: enough is enough! They are tired of bringing envelopes to teachers several times each year. And they went on the Internet, where they told history about their cash "gifts."

Result: a scandal in this Krasnodar school broke out into one of the most discussed topics in Russian social networks. Second result: the brawler teacher was dismissed. As the journalist notes, she was fired for extorting bribes.

However, in Russia, the envelope "practice" still flourishes.

Today’s Russia is ranked 131 in the 176 ranking of countries. In the new report, Transparency International still indicates that in the Russian Federation the fight against corruption is on the right track, especially in terms of the adoption of anti-corruption laws. Recently, Moscow even passed a law that will protect employees who report back on the facts of corruption.

Along with this, changes in attitudes in society are noticeable: an increasing number of people perceive corruption as an unacceptable phenomenon.

And nevertheless, in Russian kindergartens, schools, hospitals and institutions often expect "small bribes" from citizens. The reason that parents or patients give money is fear. For example, Russian citizens are afraid that their children will "learn worse." After all, pupils are “completely dependent” on the location of teachers (civil servants). And the flip side: Russian teachers, the correspondent indicates, receive pennies.

And corruption scandals do not stop.

Here is another example: a teacher at a Sochi school last spring got angry at her parents, who “gave” her little money.

She even spoke on the VKontakte social network, where she said a mocking “thank you so much” for the parental greeting on March 8, expressed in the amount of 5000 rubles. She added that she wants to return it: “So, you estimate my attitude towards your children!”

So, in the country there are big internal problems of corruption and big problems with the governors. But, apparently, on the outer "front" everything is fine. And even the US allies turn away from the USA and turn to Russia. At least that's how they see it in America.

Tom O'Connor in Newsweek expresses the following opinion: Trump "fights" with Iran, but the US allies in this "war" ... go over to the Russians and the Chinese!

The fact is that former US officials, who played a role in the agreement on the Iranian nuclear issue in 2015, criticized President Trump’s decision to cancel the agreement. These people believe that such an act would lead to "the isolation of the United States in the international arena." And no wonder: the White House did not care about the opinions of Iran itself, as well as of China, France, Germany, Russia and Great Britain, who made the relevant statements. On Friday, the thirteenth, Mr. Trump announced his refusal to support the Joint Comprehensive Action Plan, signed by the above-named states in the time of B.H. Obama.

“Trump is trying to lower other states to the level of his own politics, but other states have no reason to support this,” said Ben Rhodes. According to him, the US is moving away from its “closest allies.”

Wendy Sherman put it in the same vein: "We will weaken our positions and isolate ourselves."

Apparently, the “self-isolation” of the United States, about which people close to the historical agreement of the six mediating states with Iran speak of as a close event, means the realization of Putin’s cunning plan, which is performed by the Kremlin’s appointee Mr. Trump. Just think: Trump is pursuing his plan as if to spite the entire international community! Objections rush from everywhere, from the most diverse political camps - from “communist” China and “developing” Russia to advanced capitalist Germany and Great Britain. Trump pushes himself into a corner. Togo and look, Europe will lift the sanctions against Russia and impose sanctions against the United States.

As for the scandals with "offerings" to teachers and other officials, then victorious marches are far from here. The sadness here is this. The reason for publicity, which is written in the press, was not an attack on corrupt officials, but a decrease in “offerings”, probably due to the financial crisis in the country. The miserable sums in 2000 or 5000 rubles rouse the recipients, and those, apparently considering the gifts in envelopes as the norm, are outraged publicly. No shame, zero embarrassment. It comes to social networks. Publicity and became the cause of the “fight against corruption”: the scandals simply went beyond the school and through social networks became known throughout Russia and even in Western Europe. Is it possible to defeat corruption in a country where it has long become the norm, where other teaching people are openly outraged by insufficiently generous “offerings”?

Ctrl Enter
Noticed a mistake Highlight text and press. Ctrl + Enter
We are
Situational analysis of the death of the MH17 flight (Malaysian Boeing 777), made on the basis of engineering analysis from 15.08.2014Results of the week. "God forbid to see Russian revolt, senseless and merciless!"
29 comments
Information
Dear reader, to leave comments on the publication, you must to register.