The largest terrorist attack in Mogadishu

October 16 2017
22
The largest terrorist attack in recent years has occurred in Africa. We are talking about the African state of Somalia, in the capital of which - the city of Mogadishu - a mined truck was blown up in the immediate vicinity of the hotel building. The attack was carried out in the area of ​​Khodan.


Local authorities claim that the culprits of the barbaric attack are the terrorists of the Al-Shabab group (branch of Al-Qaeda *, prohibited in the Russian Federation). As a result of a powerful explosion, at least 276 people died, even more 300 were injured of varying degrees of severity. At least 25 of them are in critical condition. Therefore, the number of casualties is increasing every hour - medical workers state the facts of the deaths of the injured after they are delivered to local clinics. 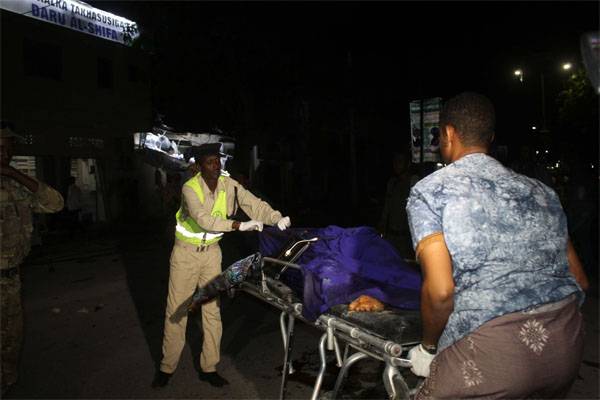 News agencies report that the explosion was not one. Another blast was carried out in the Medina area.

In total, several buildings in Mogadishu were almost completely destroyed. In their rubble, there are still people. Moreover, local authorities can not exactly answer how many people are currently missing. Work is underway to dismantle debris and search for survivors of a terrible terrorist attack.