Monarchist "virus Poklonskaya" and liberal "Chubais syndrome": from one laboratory?

October 17 2017
119
It so happened that for quite a long time I communicated in letters with representatives of two trends: monarchical and liberal. And he himself appeared to be sort of between them, really between two fires. And the result was a very funny calculations. 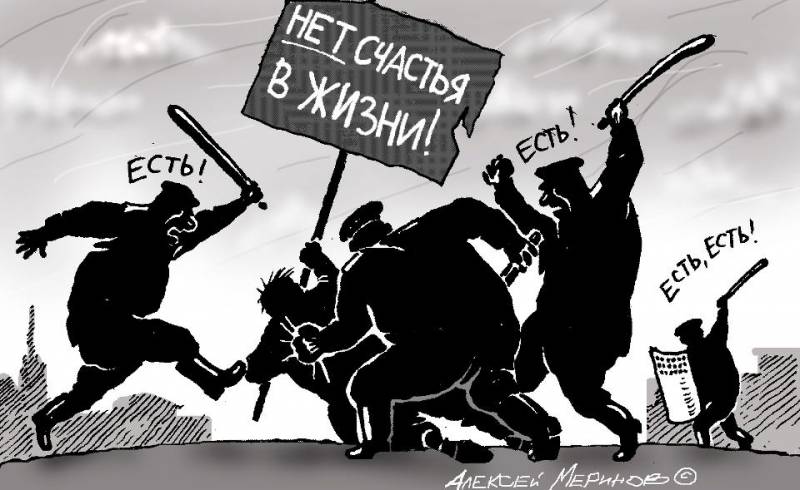 Monarchists and liberals: who is more maternalstories valuable?

To paraphrase Mayakovsky, nonetheless. Of course, gentlemen, monarchists live history. It's all clear and transparent. The history of the Russian Empire is the bible of any monarchist. He lives in it. It seems to be nothing so bad about it.

On the one hand, yes. On the other - how to teach everything.

I have long been interested in the question: why did the last emperor suddenly become an icon? Not his grandfather Alexander the Second Liberator (much respect), who, by the way, also moved into another world not on his own will, not father Alexander the Third Peacemaker (generally bow down)?

The answer from the monarchical mass is simple: therefore. Because holy and all. Paws away from the king-father.

Let me quote one of the messages.

“I just uphold his honest name and the honest name of the deceased Russia. And I have every right to do this, because of the dead, either it is good or nothing. This is my position, and I defend it. It is disgusting to me when my lost Fatherland is thrown mud at cannibals, justifying the genocide of the Russian people by industrialization and victory in a war paid for with Russian blood. Ugly.

An interesting point of view. Which, however, does not interfere with watering mud with everything that happened from 1917 to 1991 years.

Well, at least, thank God, that fascism is worse than Bolshevism. For now at least.

Against whom and for whose interests were sent by Nikolai the Second millions of exactly the same Russian people to the First World War - not discussed. For all that the anointed of God has done is a blessing for Russia. Nevermind.

As I now understand, when a cultural worker does not work, the field is not plowed for a cult worker. And the complete absence of at least some intelligible ideology gives rise to such zombie sectarians from 18 to 40 years old.

Vacuum in the minds must be replaced by something, so it is replaced. The only question is who?

What is most terrible, none of the three of my interlocutors could not answer the amebic question: then what?

Indeed, then what? Well, let's build the church of Nicholas in each city. Okay, no problem. Well, let's start there all together to walk under the watchful eye of the prosecutor's office in general and Poklonskaya in particular. Let's start worshiping and bowing. But then, really, what?

I received no answer from anyone. Neither intelligible nor any else. The vacuum in the head and the imperial flag - it turns out to be dreary.

Further, insults began in the style of “you are defending your executioners, you have Stockholm syndrome” and the like.

Probably, it is not necessary to say to what generation my frantic interlocutors belonged? That's right, by the very same. Thrown.

Ours including the wine that happened, yes. But at the output, we have not yet received an army, but a certain number of not very smart, but great processed ones. Reserve, so to speak.

Whose? Now we get to this.

But first I touch the liberals. Those.

I agree that if their opinions are listening to something, then half-heartedly. Nevertheless, supporters of Chubais, Yavlinsky, Nemtsov and others still have a place to be. Rather, less than more, but still live.

And, unlike the monarchists, they have a clear understanding for tomorrow. I will not paint, we all know that to whom Chubais should belong and where those who “would not fit into the market” should have gone to. Also a very good strategy.

But the liberals called idiots for some reason does not rise language. They have a goal, building a society in the American way and likeness, they have a program. But they really did not work out in a particular country taken.

Democratization, final and merciless, still did not take place. Razderbanit all failed. And what's more, the American-style liberals, that is, “have not taken root”. Nobody has a chance to climb up.

But you have to do something?

No, this is not a fairy tale about the fact that monarchists are the next in line crowd, no. Although both liberals and monarchists have one thing in common which makes one think.

Both the first and second with the same pleasure spit in the Soviet past of the country. Here in this, albeit under different flags, but they are one. Everything that was under the Soviet Union was wrong, disgusting, must be abused, forgotten, and so on.

You say: what wound up, scoop?

Are there any options? Do not start? Yes of course. So that some sucker would tell me how my great-grandfathers, grandfathers, and father did everything wrong? Oh yes, I heard enough. So what? Pry a piece and throw it out?

Stop, but this has already happened. Already called to repentance. All the same 90-x. And again? Only then were the democrats called, who are now liberals, now they are monarchists.

But the essence is the same at the exit. Full contempt for history, for the past. And either along the liberal path forward to a brighter future according to Chubais, or, according to Poklonskaya, in the church, banging their heads in repentance. But without any future at all.

And here is my conclusion.

With the liberals did not work. Suddenly, for no apparent reason, crowds of admirers of the monarchical past drew themselves, but without a definite future. But those who are ready to spit and slush over part of our historical past.

What happens: the program is not added?

Strange, is not it? The program is elementary. Here are the liberals:

1. In the USSR, everything was bad.
2. In Russia, everything will be fine if:
a) take the American model as the ideal;
b) give everything you can into private hands;
c) as much as possible to sell everything abroad.
3. Broad strides rush into a bright future.

This is short. And the monarchists?

Not finished. But they will finish it sooner or later? The world does not tolerate emptiness. And the vacuum must be replaced with something. This is physics, you can’t argue against it, even with the black-and-white-yellow flag, it is, my dear, the same for everyone.

And here we come to the main problem of our being: to the absence of a distinct and generally no state filling for consciousness.

If something is lying on the street, then it is unowned, right? That is a draw?

It turns out that the heads of all these monarchists were also picked up by someone and put the idea there, that during the time of the tsar-father, everything was so great that it was heaven on earth. And then came the bloody Marxists and the paradise of that ...

But what’s next, these fans of RI haven’t been put into the heads yet. But it is quite obvious that they will. When they come up with that.

Moreover, our state really does not care, unfortunately. And simply empty-headed impersonality is being replaced by people who already have some idea in their heads. Not the best. But - the idea. Someone carefully designed and invested in these heads.