Ukrainian hysteria breaks about the truth of life

October 16 2017
46
Last Thursday, the builders of the Crimean Bridge installed on the fairway supports an automobile arch weighing five and a half thousand tons. The unique operation was followed not only in Russia, but also in many countries of the world. With particular predilection, the actions of the Russian bridge builders were observed by the Ukrainian authorities and their assistants. From the very beginning of the construction of the bridge from the Kuban to the Crimea, they convinced the Ukrainians that Russia would have nothing to do with this project. They recalled the previous unsuccessful attempts to connect the peninsula with the mainland through the Kerch Strait and wickedly rubbed their hands. But, contrary to the Ukrainian kamlaniyam, the bridge grew steadily, acquiring its clear outlines. 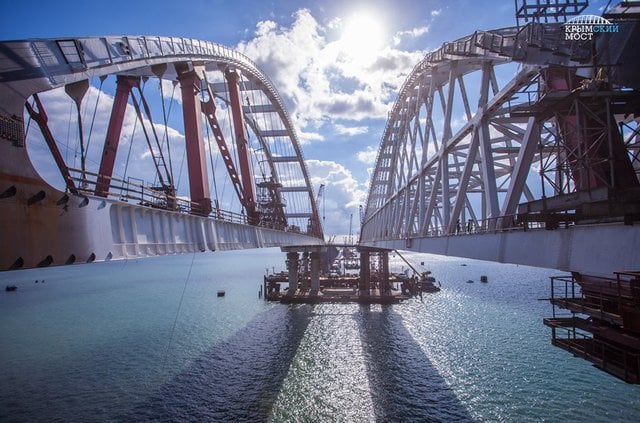 Then in Kiev, they changed the subject. Local media and political biased by the authorities screamed about the environmental threat that the new bridge crossing would cause to nature. In the spring, President Poroshenko himself joined this choir. He "instructed to sue the Russian Federation because of environmental harm from the construction of the Kerch bridge," the presidential press secretary Svyatoslav Tsegolko informed the Ukrainians via Twitter.

Following him, a statement was made by the prosecutor's office of the Autonomous Republic of Crimea. There is such a sinecure in Kiev, fulfilling the political orders of Poroshenko and his company. In May, she announced the initiation of criminal proceedings on the construction of a bridge across the Kerch Strait.

“Building a bridge in the strait,” the fake prosecutor’s office substantiated her claims, “can lead to a regional ecological catastrophe. In violation of the requirements of the Water Code of Ukraine and the norms of international law, an object is built that poses a serious danger to the ecology of the Black and Azov Seas: pollution, violation of the natural reproduction of aquatic biological resources and their destruction. ”

The statement was solely for internal use. Authoritative international environmental organizations have not confirmed the panicky expectations of the Ukrainian authorities. Then in Kiev offices was born a new claim to the bridge under construction. Ukrainian authorities have said that he will limit the entry of large-tonnage merchant ships into the Sea of ​​Azov.

Now this is the most popular version. It began to be actively exploited in late August, when builders installed a railway arch on the fairway. President Poroshenko got excited, local media and politicians frightened Ukrainians and the whole world. Some pierced quite strongly. For example, expert at the Atlantic Council portal Stephen Blank called on the US government to “unblock” the Kerch Strait with the help of the US military fleet.

Blank called the construction of a bridge to the Crimea “a demonstration of contempt” for President Donald Trump and an “attempt by Moscow to show great power.” According to the scenario of the Atlantic Council, the US Navy ships, under the pretext of protecting the Ukrainian ports of Mariupol and Berdyansk, should enter the Sea of ​​Azov, and then eliminate the bridge under construction.

It is difficult to say what was more in this appeal - provocative stupidity or outright schizophrenia. In America itself, commentators amicably preoccupied by the fact that the portal calls on the US government to declare war on Russia. However, the White House did not respond to the recommendation of an aggressive "expert".

Attentive analysts drew attention to the purely technical absurdity of the proposal itself at the Atlantic Council. The fact is that the Kerch Strait is quite shallow. By virtue of this circumstance, in the middle of the last century, a restriction was imposed on the passage of ships and vessels with a depth of draft more than 8 meters in the Kerch-Yenikalya Canal.

This was reminded by the Atlantic Council of the French edition of AgoraVox. The author of the publication, journalist Christel Nean led the technical data of the shock ships of the US Navy. American aircraft carriers have a draft of 12 meters, for cruisers - 10, for destroyers - 9 meters. The natural properties of the Kerch Strait will be an insurmountable obstacle for them.

Crimean bridge does not interfere with fish and birds

For this reason, by the way, large container ships never entered Ukrainian ports on the Sea of ​​Azov. Because their draft starts with 9 and can reach 15-20 meters. Ukrainians are trying to keep silent about this feature of the strait, they are more hysterical about the dimensions of the fairway arches (the distance to the water surface is 35 meters) and the bridge span itself - 200 meters.

From the calculations of the Kiev "experts" it follows that ships with a length of less than 160 meters can now go to the port of Mariupol, and the displacement is not more than 10 000 tons. Due to this circumstance, the port's cargo turnover will fall, and its Ukrainian clients will have problems. And, of course, Russia is to blame for all these troubles, having started the construction of a bridge to the Crimea.

Life quickly denied these allegations. Soon after the installation of the railway arch underneath, it passed to Mariupol Federal Oshima with a load of 20000 tons. The length of the vessel is almost 200 meters. But the draft is quite acceptable for navigation in the strait - 4,8 meters. It is noteworthy that after installation over the fairway passage of the second, automobile arch, the first through the channel was the dry load “LADY LEILA”. This large vessel went from the Ukrainian Mariupol to the Israeli port of Haifa.

It would seem that after such verification of the bridge, the practice should abate the Ukrainian hysterics around the construction of the bridge. But no. Now this topic has become an explanation of the economic problems of Ukraine. Even in the summer, Yuriy Lavrenyuk, the Deputy Minister of Infrastructure of Ukraine, actively pedaled her.

He gave the Ukrainian media several interviews, the meaning of which was reduced to the fact that Russia's construction of a bridge across the Kerch Strait "would lead to a significant reduction in ship calls to the seaports of Mariupol and Berdyansk, and a decrease in the profits of port operators and their partners."

Now Lavreniuku is echoed by the head of the Administration of the Seaports of Ukraine Raivis Veckagans. “We see,” he told journalists the other day during a press tour to the Yuzhny sea trading port, “that we have a drop in freight turnover to 30% in Berdyansk port. This situation is connected with the construction of the Kerch Bridge and with the decision of the cargo owners to reorient the cargo to other ports. ”

Statements by Ukrainian officials can be taken on faith, but you can look at the situation through the eyes of the already mentioned French publication AgoraVox. It found a very convincing comparison: “Russia has five ports on the Sea of ​​Azov, and their turnover in the 2016 year was 29,1 million tons. This is three times the official tonnage of Mariupol and Berdyansk and ten times more than their real tonnage. ”

We note, by the way, how the French gracefully walked through the double-entry bookkeeping of Ukraine - assessments of the real situation of the economy and numbers for the International Monetary Fund, as they say, - for takeaway. Hints began to appear about this in the Western media, but the new topic is still waiting for its attentive researcher.

What is obvious today, Russia would not design the Kerch bridge to the detriment of its ports of Azov and, of course, would make the necessary amendments to the design of the passage along the channel. Probably, this was not required, since today Russian cargo ships freely go through the Kerch Strait to 200 meters in length and displaced to 50000 tons. According to experts, this corresponds to the possibilities of cargo handling in the Ukrainian ports of Azov.

This is already known in the world. Therefore, today fewer and fewer people are ready to listen to Ukrainian stories about the “fetish of the Crimeans, whom the invaders swear.” The British agency Reuters has spread a photo essay on the establishment of an automobile arch bridge. The pictures show huge vessels passing along the channel of the strait, fishermen taking out catch nets, numerous flocks of swans and ducks swimming near the bridge. The Crimean bridge has already entered the life of the strait. Perhaps the time will come when this is recognized in the Kiev government offices.

Ctrl Enter
Noticed oshЫbku Highlight text and press. Ctrl + Enter
We are
The road arch of the Crimean bridge brought into the fairwayThe bridge to the Crimea will be on time. And not in spite of, but because
Military Reviewin Yandex News
Military Reviewin Google News
46 comments
Information
Dear reader, to leave comments on the publication, you must to register.