“Deadly trick” for Moscow: new details of the “Fast Global Strike”. How not to step on the same rake? 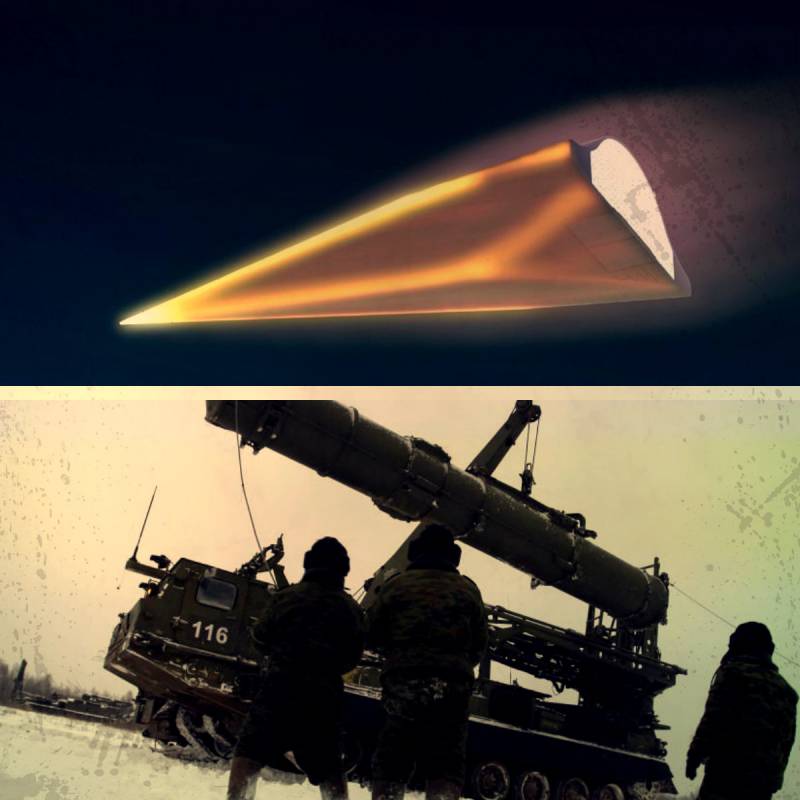 The end of the previous week was remembered by the impressive turmoil among the Russian mass media, who were greatly impressed by the data on the launch of the US Department of Defense’s program for developing complexes that are in line with the concept of the Fast Global Impact (BSU). Despite the fact that the active phase of the design and development of supersonic and hypersonic means of delivery of high-precision weaponsAccording to the representative of the Ministry of Defense of Russia Alexander Emelyanov, it began only recently, individual projects have been carried out by the American defense giants for more than 8 years. These include intercontinental ballistic missiles with monoblock and multiblock non-nuclear "equipment", which are individual-purpose maneuvering BBs with advanced missile defense systems (strategic types of BSU), as well as tactical supersonic or hypersonic anti-ship / multipurpose long-range anti-ship missiles.

The latter, in turn, can be divided into 2 subtypes: the X-51 “X-174“ Waverider ”, etc., as well as the long-range RIM-6 ERAM attack missile long-range missiles (as is well known, Raytheon "Is actively working on high-speed anti-ship modification SM-72). A separate class is the concept of a hypersonic reconnaissance-strike high-altitude aircraft from Lockheed Martin SR-40, which, according to the idea of ​​the developer and representatives of the Air Force, in addition to intelligence from 45 - 6 km, can strike at targets with high-precision XNUMX-flywheel elements of high-precision weapons with ultra low reflective surface.

If we argue objectively, there is nothing supernatural for a knowledgeable in military technology and geostrategic redistribution of man in this information. Nevertheless, all signs of panic appeared in the information resources and forums caused by a loud publication titled “Global strike: the United States will destroy Russia in 60 minutes”. For a person who is ignorant and suspicious, such material can result in real stress. Apparently, this name was caused by a statement by Alexander Emelyanov, made on the margins of the 1 Committee of the UN General Assembly, where a high-ranking representative of the Defense Ministry noted the fact that the Pentagon intentionally accelerated the rate of output of BSU funds to the level of operational alertness regional missile defense as soon as possible. After all, the alleged retaliatory strike of the Russian and Chinese Strategic Missile Forces after the “star raid” of the BSU state facilities should be much weaker than the pre-emptive one. Theoretically, the opinion of the Russian military representative quite correctly reflects the whole essence of the actions of the Americans; but the hysteria of the press, some representatives of which have very little understanding of the current deployment of air defense systems of the VKS at the European theater of operations, knows no limits and sometimes borders on marasmus.

First, it should be noted that even today, the US Naval and Air Forces are technically absolutely incapable of delivering a “disarming” strike on all strategically important military facilities of the Russian Armed Forces, especially with the use of non-nuclear ICBM or SLBM warheads . It is impossible for such reasons as:

- excellent mobility and stealth movable ground strategic missile systems type PT 2PM "Poplar» (36 units with 36 warheads.) PT 2PM2 "Topol-M» (18 units with 18BB.), MS-24 "Yars" (82 PU with multiunit 15IX55M ICBMs equipped with 336 self-guided combat units), which does not allow the American BSU hypersonic elements to provide adequate accuracy of the circular deflection, because for detecting and “capturing” a mobile ground unit, the combat stage must have active radar an on-line homing head that cannot work effectively in the low stratosphere and troposphere because of the resulting plasma “cocoon” at a speed near 12-15М;

- the impossibility of radar direction finding of ground PGRK through strategic high-altitude reconnaissance RQ-4A / B and promising SR-72 due to the presence of the most powerful anti-aircraft / anti-missile zones of access and maneuver of A2 / AD in the aerospace space above the central Russia, The Urals and the southern part of Siberia (in previous works, we considered that the SR-72 has the ability to pass over the upper lines of interception only the C-300PS / PM1 and С-300В ЗРК; similar “fad” with С-XN UMXB300 will not work thanks to the promising ZUR 4M9MB);

- the regular arrival in service of the Radiotechnical Forces of the HKS of Russia unique in the world practice of interspecific multiband radar complexes “Nebo-M”, represented by three radar modules of meter, decimeter and centimeter ranges (RLM-M, RLM-D and RLM-CE, respectively); the detection range of a target with 0,1 m2 EPR in the sector mode is for the 200 complex km (under interference conditions) and around 300 - 320 km (without intensive radioactivity); instrumental range for large objects reaches 1800 km; the height of detection for large targets of the type BR can reach 1200 km, for small targets it depends on the EPR and elevation position.

In fact, we have a powerful RLC capable of quickly transferring to the most missile-dangerous operational directions as a missile attack warning system (EWS) and transmit target designation to the automated control systems of anti-aircraft missile brigades such as Polyana-D4M1 or Baikal. . Stationary high-potential radars of the intermediate-purpose missile systems of the Voronezh-M / DM / SM type have a significant drawback in terms of work on the means of the Fast Global Impact based on hypersonic direct-flow aerials. The trajectory of the latter passes at an altitude of 45-50 km, which is why the radio horizon limit is about 950 km, and therefore even the existing number of Voronezh is not able to cover all the “blind” aerospace parts of the Russian Federation in Siberia and Chukotka. The four-element mobile complex 55Ж6М “Sky-M”, which can turn around in a quarter of an hour, successfully compensates for this drawback. 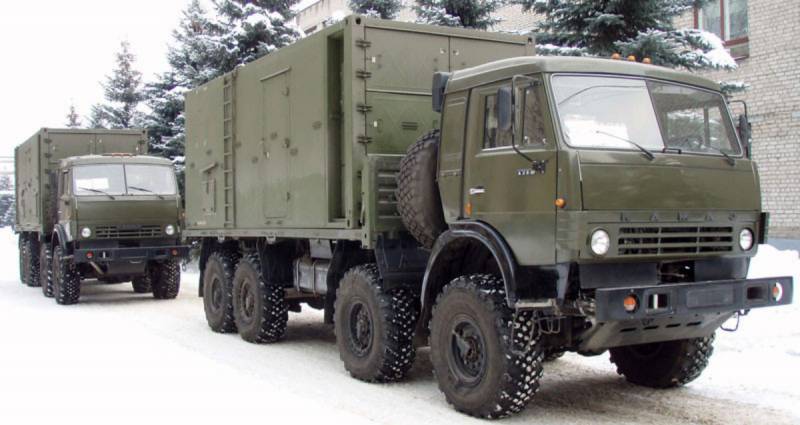 The automated control system of the 9C52М1 mixed anti-aircraft brigade "Polyana-D4M1" is a unique product of network-centric opposition in an aerospace theater. High-performance A-50 computers, as well as automated workstations of operators with wide-format MFIs built on the basis of modern components, make it possible to obtain and analyze a vast amount of tactical information about the air situation from several sources simultaneously (from AWACS A-50U and the Nebo-M RCL to low-altitude “Plyot-K” LLW and “Opponnik-G” surveillance radars). Information is received via secure multi-frequency radio communication channels with frequency hopping mode. The processed information (with the priority distribution of 250 targets) is transmitted to the PBUs of various types of air defense systems of the ground forces and video conferencing

From the above it becomes clear that forcing a situation with the help of the headlines “about the destruction of Russia in 1 hour” is pure panic, having little in common with the actual situation. Pay attention should be completely on another detail. Announcing a large-scale program for the development of BSU complexes by several American aerospace leaders, the Pentagon again openly pushes the Russian Federation into an arms race of unprecedented scale, which is quite capable of creating very, very much trouble for our economy. It is for this reason that in no case can we miscalculate with the countermeasures being taken. In particular, the allocation of colossal funds for the development of many similar means of air attack will automatically lead to a reduction in funding for programs such as PAK FA, PAK DA and PAK DP. And here with us, and so it was all written in the water with a pitchfork!

While the Americans put more than 170 F-22A, 105 F-35A, 50 F-35B and 25 F-35C on the wing, we only carry out 9 1 and 2 samples of the 41-th stages and continue to test with the old TRDDF AL1F117 (“50 product”). Moreover, as noted earlier, for the T-57 (Su-35) and Su-9C, a promising ultra-long-range air attack missile RVV-AE-PD with an integrated rocket-ramjet engine with high power in the final segment of the trajectory and due maneuverability (after all, a low-maneuverable heavy RVV-BD is not able to cope with modern "helicopter" aircraft and fighters maneuvering with 120-multiple overloads). In the American and European Air Forces, the long-awaited AIM-XNUMXD URVB units and the Meteor MBDA have successfully coped with such tasks.

Focusing on the development and introduction of precisely these types of weapons, there remains a chance of establishing domination over NATO’s long-term military capabilities. As for the fight against air attack of the Belarusian State University, there is nothing better for this task than developing and bringing to mind the project of the Advanced Airborne Interception Complex (MiG-41). Even today's modernized offspring of the RAC "MiG" - the MiG-31BM interceptor has an immense potential to destroy enemy high-altitude hypersonic objects operating at speeds up to 6400 km / h, which the machine owes to the P-37 ultra-long-range missiles and the onboard radar system " Zaslon-AM ”on the basis of PPAR, transmitting radar data to the higher-performance core“ Baguette-55 ”.

The project of the PAK DP, which is planned to be transferred to the VKS by 2026, should become the embodiment of high-altitude interceptors of the 21st century. The estimated speed of the MiG-41 closely approaches the lower boundary of the hypersonic (about 4,3М) with a practical ceiling of about 32 - 38 km. The new interceptor missiles for the advanced MiG are currently unknown, but it can be said with certainty that their flight speed will be at the level of “fresh” 9М82МВ SAM for C-300B4 (2600 m / s) ammunition The controls will present the gas-dynamic "belts" of the transverse control engines in the center of mass of the rocket and its tail for maneuvering in the upper stratosphere and mesosphere. This will allow the PAK DA project to fully comply with the capabilities of the enemy’s high-precision weapons at the beginning of the new millennium. As for the promising hypersonic types of weapons, there is absolutely no point in trying to merge tens of billions of rubles into them, trying to keep pace with the tricky American plan, because we will get all the chances to lose the weapons necessary for superiority in high-intensity conflicts. local value.

Ctrl Enter
Noticed a mistake Highlight text and press. Ctrl + Enter
We are
What war do we need to prepare for?Shield and sword
77 comments
Information
Dear reader, to leave comments on the publication, you must to register.