LC: One of the groups of the Armed Forces of Ukraine ignores orders of the command

October 14 2017
29
Chief of the General Staff - Commander-in-Chief of the Armed Forces of Ukraine General of the Army Viktor Muzhenko arrived at the headquarters of the Lugansk Operational-Tactical Group (OTG), whose command systematically ignores his orders, said the spokesman for the People's Militia of the LPR, Colonel Andrei Marochko, reports LuganskInformCenter

According to the information we have, the Chief of the General Staff - Commander-in-Chief of the Armed Forces of Ukraine, Army General Viktor Muzhenko arrived in the headquarters of the operational-tactical group "Lugansk" on a working visit.
- noted Marochko.

Presumably, the reason for the visit is the complete disregard for orders, instructions and directives received from the General Staff by the grouping command. 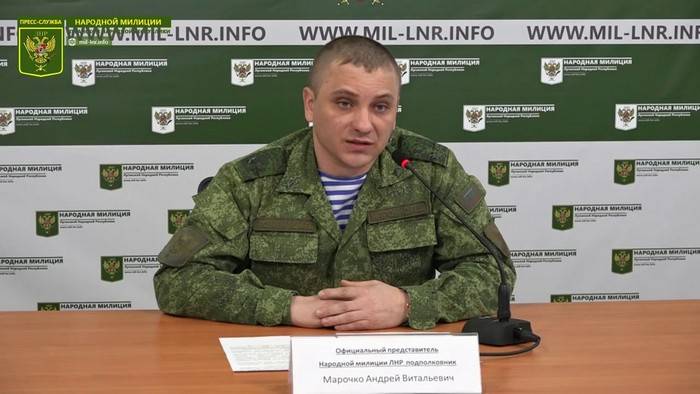 The People’s Police repeatedly noted that the moral and mental state of the Kiev security officials was deteriorating, they continued to maraud and organize “drunken clashes”, there were frequent cases of non-statutory relations that lead to desertion and suicide among the Armed Forces of Ukraine military personnel.

As it became known, the death of military personnel occurred due to poor preparation and organization of the occupation by the officers

In addition, the representative of the defense department of the LPR noted that the Ukrainian Armed Forces continue to store ammunition in places not intended for this and to equip ammunition depots in populated areas or on their outskirts.

In the area of ​​responsibility of the 14 brigade, in the warehouses of rocket and artillery weapons in settlements Novoaydar, Alekseyevka, Shiroky for the storage of ammunition use agricultural buildings
- he said.

These buildings and the surrounding area do not meet safety requirements, which can lead to another tragedy and new civilian casualties.

Ctrl Enter
Noticed oshЫbku Highlight text and press. Ctrl + Enter
We are
Chief of the Ukrainian General Staff Muzhenko reflects on the topic of "possible personal presence" of Sergei Shoigu during the operation in DebaltseveRiot day
Military Reviewin Yandex News
Military Reviewin Google News
29 comments
Information
Dear reader, to leave comments on the publication, you must to register.