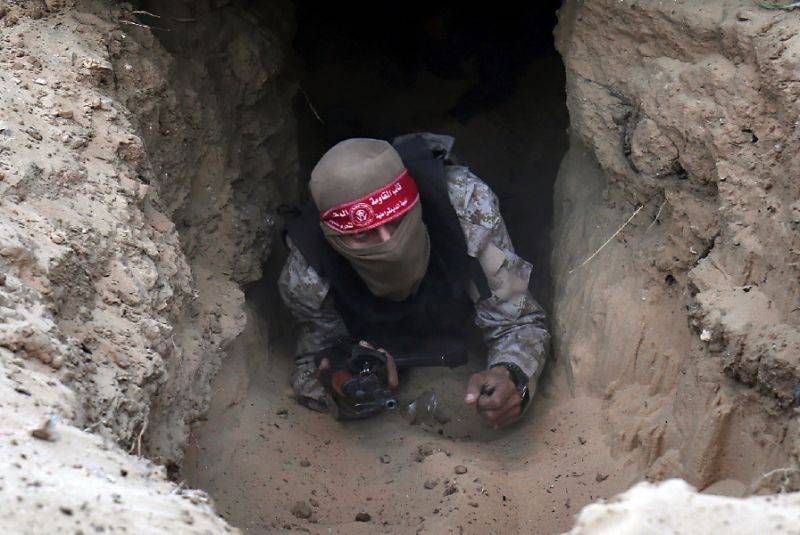 Digging tunnels during a war is as old as war itself and often represents an act of recklessness on the part of a weaker opponent. In modern warfare, tunnels are becoming an asymmetric means of denying ground and aerial technology and the advantages of firepower. The state of Israel is engaged in a continuous and merciless fight against terrorists who lay underground tunnels.

During the Vietnam War, the Americans and their allies faced similar problems and, having no better solution, simply sent groups of "tunnel rats" under the ground to search for and destroy the enemy. In South Korea, along the thin demilitarized zone, Korean and American forces have for several decades been confronted by a huge North Korean army, which has in its arsenal the most complicated network of tunnels for conducting attacks under this zone. More recently, in Afghanistan and Iraq, coalition troops fought in a tunnel with an elusive adversary. Today it becomes clear that underground operations are returning to the tactics of military operations, especially in urban space, and the army, ignoring the tunnel battle, ignores it at its peril.

The Israelis understand this very well. The main problems are created by terrorists from the tiny Gaza Strip with a length of just 41 km and a width of 6-12 km. From there begins a complex network of military tunnels dug by the Sunni fundamentalist organization Hamas, which has ruled there since 2007. Israel and Hamas are in a state of permanent war, interspersed with rocket attacks, invasion of tunnels and full-scale hostilities. Hamas, founded in 1987, is the brainchild of the Muslim Brotherhood. Its military wing, the so-called Al-Qassam Brigade, sometimes operating independently of the Hamas government, has launched attacks on Israel since its inception. In response, Israel periodically conducts military operations in the Gaza Strip, among the last major conflicts are the operation Cast Lead (December 2008-January 2009) and Operation Enduring Rock (July-August 2014).

The natural response of the Israelis to threats from Gaza was the construction of a wall along the entire border with this formation. The wall, in which five checkpoints are organized, has become a relatively effective means of deterring the bulk of Palestinian terrorist attacks. To overcome this barrier, terrorists began digging tunnels deep underground. The scale of the tunnel war in Israel is staggering.

Israel claims that Hamas spends millions of dollars on 100 a year and hires Palestinians to 1500, paying them from 250 to 400 dollars a month to dig tunnels into Israel. It is reported that Hamas confiscates up to 95% of cement produced in Gaza to strengthen these tunnels. Hamas has gained vast experience in building tunnels under Israeli fortifications. According to the lieutenant colonel of the Israeli army Peter Lerner, many of the tunnels “are equipped with electricity, communications, air filters and rails for transportation, they are quite spacious, they can easily stand an adult with small weapons, RPG and other equipment.

The elite unit of the Israeli army corps, which is charged with neutralizing underground threats, is called Yahalom (Hebrew diamond), its official name is “Special Forces Engineering Division”. In the journal of the Israeli army, Yahal is described as follows: “Although the task of the entire unit is to combat the tunnel threat, it is divided into specialized companies. The company "Yael" is engaged in engineering intelligence. Saifan has been trained to combat the threats of non-conventional weapons (weapons of mass destruction). Two more units are engaged in the disposal of explosive objects, and “Samur” specializes in tunnel warfare. ”

Based on 50’s experience of Operation Enduring Rock, which included the discovery and destruction of Hamas’s extensive tunnel network, the army doubled the number of officers and soldiers assigned to Yahal and added new military technologies to its arsenal. These technologies include: a specially adapted protective kit for each soldier; radio systems for working inside the tunnel; the latest night vision equipment; use of small robots; new secret technologies for detecting activity in the tunnel; and training systems for practicing tactics, methods and methods of warfare. We will focus on the last three: robots for work in tunnels, technology for detecting tunnels and, most importantly, advanced combat training. 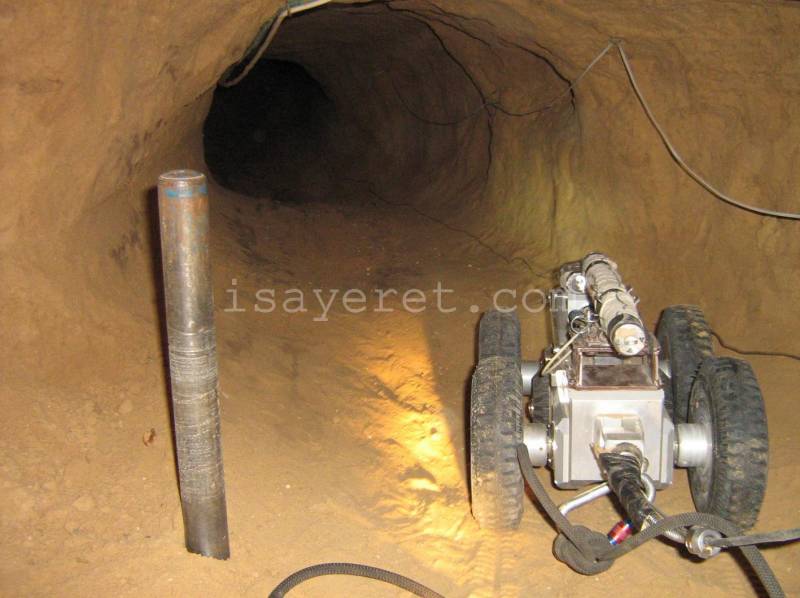 The Israeli army employs many advanced technologies in the fight against the tunnel threat, including its small assistants - four-wheeled mobile robots

The Israeli army is armed with a whole arsenal of robots, adapted for action in the tunnels. The most common are Eye Drive, EyeBall, TALON and ANDROS WOLVERINE. The Mistral Group ODF Optronics has developed two hand-cast, abandoned reconnaissance robots: the caterpillar EyeDrive and its smaller brother, the EyeBall, with a size and shape similar to a softball ball. The day / night cameras of these small robots provide an overview of the 360 °, video and audio information is transmitted wirelessly; they are transported, deployed and serviced by a single operator. The army also has larger devices, for example, the TALON IV robot was adopted by Yakhalom in the 2013 year for reconnaissance and neutralization of explosive objects. The ANDROS WOLVERINE system, developed by Northrop Grumman REMOTEC, also entered service with the Israeli army. This heavy universal robot weighing 73 kg can be used to neutralize improvised explosive devices. In addition, it is possible to install various weapons on it; in the dark tunnel he will move ahead, saving the soldiers from danger. 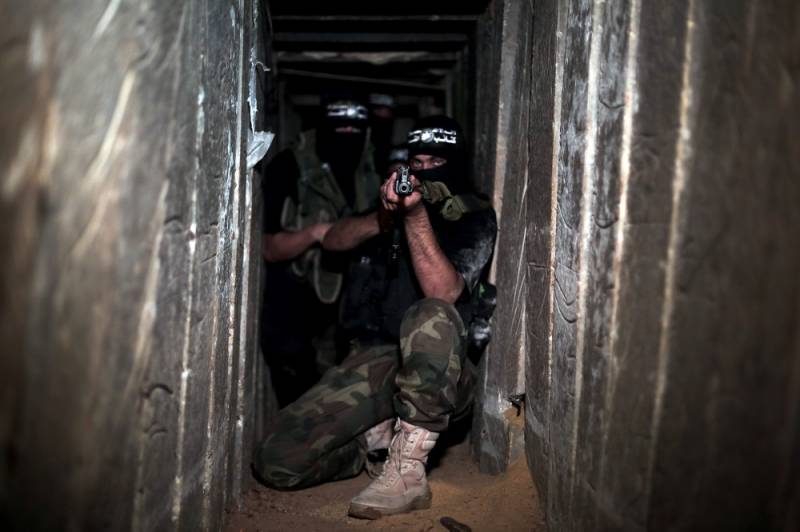 Hamas fighter from Al-Qassam brigade in a tunnel in Gaza. The tunnels of this group represent a strategic problem for Israel.

Detecting enemy tunnels through layers of soil and stones is a huge problem. The Hamas organization views its tunnel activity as a strategic weapon against Israel, actively digging tunnel systems at depths of 20-35 meters. In response, the Israeli army began to carry out what it calls "permanent underground security tasks." In order to conduct continuous underground activities effectively, the necessary means to improve the level of ownership of the situation in the underground space. In recent years, seismic technology has gone far ahead. Since the beginning of 2000, the Israeli army has tested several tunnel detection systems, but none of these systems have been able to penetrate the ground deep enough and therefore could not become a practical means of detecting the laying of the tunnel by the enemy.

Last year, Israeli Prime Minister Benjamin Netanyahu announced that Israeli scientists had made a breakthrough in tunnel detection technology. “In recent days, the state of Israel has achieved a breakthrough in its work on the localization of tunnels, which no country has achieved. We checked the whole world on this. ”

This tunnel detection system was created with US financial support and was developed by a consortium of companies led by Elbit Systems and Rafael Advanced Defense Systems. It is reported to consist of hundreds of seismic sensors located underground and connected to an advanced computer system for monitoring tunnel activity. This technology can determine the length and location of tunnels with very high accuracy.

The Israeli anti-tunneling system is classified, but Israeli newspapers write that it will soon be deployed along the entire Gaza border with Israel. At the same time, Israeli engineering troops are digging a wide anti-tunneling barrier along the Gaza border, which will be laid deep under the ground in order to provide physical and technological protection against the construction of new tunnels. The search for a technology to solve the tunnel problem was difficult, but the Chief of the General Staff of the Israeli army said about this: "We did everything possible to find a technical solution to the problem." 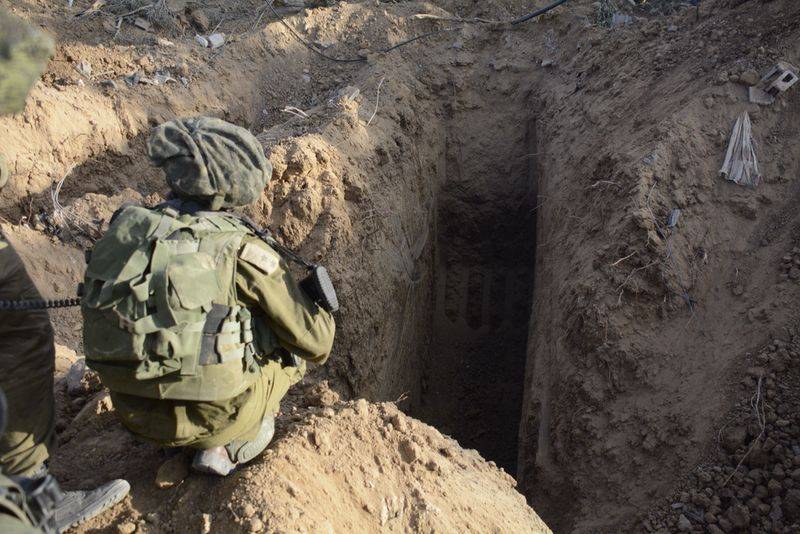 An Israeli soldier peers into the black hole of a tunnel dug by Hamas militants into Israeli territory. Asymmetrical enemy uses tunnels for protection and shelter, as well as a safe means of attack

The slogan "Train as if you are fighting" lives the Israeli army. She recognized the need to prepare for a tunnel war and is building a new high-tech combined arms training base on the Golan Heights to prepare for combat operations in human settlements, which also includes an underground war preparation site. The Snir Training Center (named after the tributary of the Jordan River) will allow for the conduct of combat training of all Israeli units and the development of combined-arms operations both on land and underground. Similarly, the concept of the National Training Center of the American Army, the Israeli military will be able to conduct comprehensive training in the entire spectrum of hostilities, from labyrinths of tunnels to bilateral exercises and live firing underground.

The tunnel system under the Snir base will allow Yahal and other Israeli units to gain experience in real tunnel systems based on Hamas tunnels that were discovered and destroyed by Israelis in the 2014 war of the year. For training with combat shooting, there are "smart targets" representing both combatants and civilians. A special conditional enemy unit, or a “red group,” will be organized in the center of Snir, which will conduct training battles with the “blue” units of the Israeli army. For this purpose, the MILES (Multiple Integrated Laser Engagement System) multipurpose integrated laser target destruction system will be used to simulate the use of weapons. The Israeli military will train in the center's tunnels, learn how to discover tunnels, enter them, orient, mark their path, in general, improve their tactics for victory in an underground battle. The center will provide modern material and technical base for the training of elite, regular and reserve Israeli units. Underground training center Snir is currently working and will be fully ready by the end of 2017.

In its report on the performance of combat missions in the war in Gaza in 2014, the Israeli army acknowledged that it was not ready to fight in the tunnels. Preparing the army to detect, enter and neutralize a huge network of tunnels is a difficult task that the Israelis still have to solve. Since 2014, Hamas has announced that it is rebuilding and expanding its network of tunnels. This statement was a signal to Israel and forced the army to focus its efforts on fighting in the tunnels.

Today, the Israeli army is facing ever-changing tactical challenges, responding to them with new technologies and in-depth combat training. She intends to show her adversaries that the cost-benefit ratio from further tunnel attacks will not be in their favor. Whether it will achieve this is not yet clear, but at the interim stage its activities will allow the military of other countries to pass on valuable experience that will help reduce their own losses and win a merciless underground war.