October 13 2017
33
RIA News publishes material that talks about the next success of the Syrian government army in the province of Deir-ez-Zor. According to recent reports, the militants of the so-called "Islamic State" (* prohibited in the Russian Federation) were driven out of the northeastern suburb of Deir-ez-Zor - Hattle settlement.


At the initial stage of the operation, militant positions were attacked aviation, then dense artillery fire was opened on them. Some time after that, the assault troops entered Khatla, because they did not meet with any active resistance from the terrorists.

At the moment, the fighting groups of the Syrian troops conducted a sweep of the neighborhoods of the village of Hatla and began to equip their positions for further advancement towards the neighborhoods occupied by the militants. 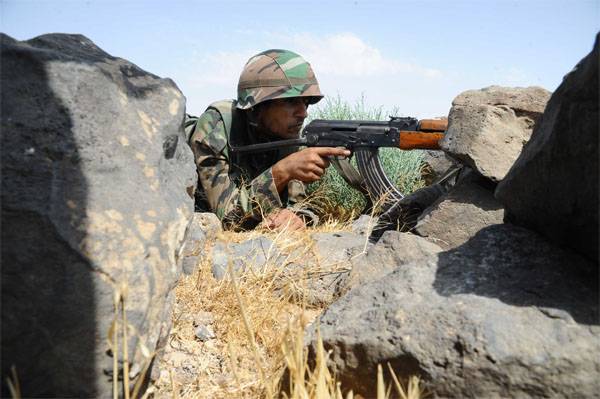 The commander of a Syrian army unit emphasizes the importance of success in Hatla. The fact is that it was through this settlement that the supply routes to the militants of ammunition passed weapons and food. Now all these routes are blocked. This will help to finally free Deir ez-Zor from ISIS terrorists (*).

Ctrl Enter
Noticed a mistake Highlight text and press. Ctrl + Enter
We are
The Iranian rocket plant in Banias was too tough for the Israeli Air Force. What does Tel Aviv fear? Details of the fight for Deir-ez-Zor
33 comments
Information
Dear reader, to leave comments on the publication, you must to register.