October 16 2017
50
Current Naval Development Plans fleet provide for the construction of a large number of warships, submarines and auxiliary vessels of various types. The ultimate goal of all these works is to radically update the Navy with the most serious consequences for the country's defense. A number of tasks are solved without any problems, but new ambitious programs may face special challenges.


At the moment, all the major shipbuilding enterprises of Russia are engaged in fulfilling a mass of orders involving the construction of warships of various classes. According to the results of these works, the Russian Navy should receive dozens of frigates, corvettes, patrol ships, landing ships, rocket ships and boats, etc. By launching the operation of all these ships, the fleet will increase its combat potential in the coastal and marine zones. 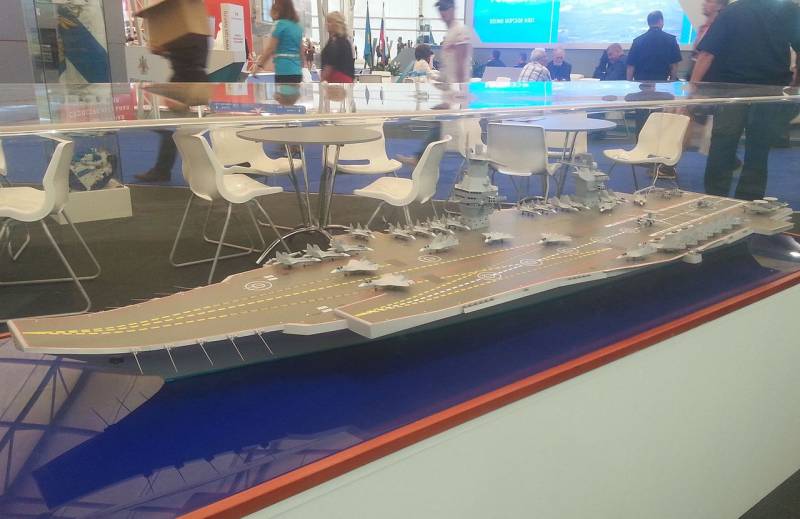 Despite all the obvious advantages and expected results, the current shipbuilding programs have a specific feature. All ships under construction are of medium size and displacement. Thus, the displacement of the newest ships rarely exceeds 5 thousand tons. For comparison, the 1164 “Atlant” missile cruisers have a displacement of more than 11 thousand tons, while the 1144 “Orlan” heavy nuclear missile cruisers have this parameter greater than the 27 thousand tons. So large and heavy warships of great interest to surface forces of the Navy in recent years have not been laid and not built.

However, the command and industry have not forgotten about such construction, and already have certain plans for this. Currently, several new projects are being developed for large surface ships for various purposes. In the case of their successful implementation at the disposal of the Navy, new combat units with the highest characteristics and capabilities will appear. At the same time, some new projects will make it possible to supplement and then replace some of the existing ships, while others will lead to a noticeable increase in the potential of individual formations.

Perhaps the most interesting and daring promising project in the field of large ships is the creation of a new aircraft carrier. Currently, the Russian Navy has only one ship of this class, which is considered insufficient. For years, there has been a discussion on the possibility of developing and building a new aircraft carrier, but real work has been regularly postponed and has not yet begun. However, recent statements by officials allow them to look into the future with cautious optimism: a new aircraft carrier project may emerge as part of the new State Weapons Program, designed for the 2018-2025 years.

As far as we know, the military department has not yet determined the desired appearance of the future aircraft carrier and has not issued a technical task. Nevertheless, the industry, trying to predict the future actions of the customer, is already offering its projects. Thus, over the past few years, the Krylov State Research Center (KGNTs) has been demonstrating at exhibitions the materials on the 23000E multi-purpose aircraft carrier project. At the same time, the project has not yet received official approval and retains the status of a preliminary proposal.

KGNTS specialists suggest building a ship with a length of 330 m and a maximum width (along the flight deck) 85 m. The full displacement of such an aircraft carrier will reach 95 kt. of them. It is proposed to use various weapons for self-defense. The type of the main power plant will depend on the wishes of the customer: options developed using the boiler-turbine and nuclear systems.

The second bold project in the field of large warships is a destroyer of the type "23560" or "Leader". Work on this topic started a few years ago; Back in 2013, the Severnoye design bureau presented a preliminary draft version. At the end of August, 2017 appeared reports, according to which the Ministry of Defense approved the draft design of 23560. Earlier it was reported that the construction of the head "Leader" could begin as early as 2018, with the transfer to the customer in 2022.

A characteristic feature of the 23560 project is the large size of the ship: in terms of size and weight, this destroyer will be superior to some existing cruisers. The total length of the “Leader”, according to open data, will reach 200 m with a width of up to 20 m. Displacement is set at the level of 18 thousand tons. The ship can receive a nuclear power plant. A significant number of modern and advanced weapons will be on board.

The basis of the 23560 destroyer armament complex should be a universal vertical launcher with several dozen cells for different types of missiles. It is assumed that it will be equipped with rockets of the Caliber family, as well as Onyx and Zircon products. Similarly, air defense can be organized. It is also expected to use large-caliber artillery guns and torpedo tubes.

A few years ago, Russia lost the opportunity to replenish the military composition of the Navy amphibious helicopter-carrying docking ships of the Mistral type, built in France. Nevertheless, the need to modernize the amphibious fleet remained, and soon its own draft DVKD was created. Nevsky Design Bureau created a project with the code "Surf". From the point of view of the general concept, this project is similar to the French one, but it has a number of characteristic differences.

The Surf project proposes the construction of a ship with a length of about 200 m and a width of more than 30 m, equipped with a large flight deck and bulk cargo holds. The ship's displacement will reach 24 thousand tons. Due to its size, the ship will be able to take on board up to 500 paratroopers or up to fifty combat vehicles. AT aviation the group will include up to a dozen transport and combat helicopters. The stern dock camera will allow landing with boats. The armament complex of the ship is calculated to solve the problems of self-defense; shock systems are not provided.

Construction of large new ships is a very difficult task. First of all, such difficulties are connected with construction technologies. In addition, a serious problem may be the search for suitable production capacity corresponding to the dimensions of the future ship. Unfortunately, a significant part of the shops and slipways of Russian shipyards cannot be used in the new program due to insufficient size. However, Russian shipbuilding has large platforms.

First of all, it is necessary to mention the workshops of the Sevmash plant. It is in Severodvinsk that Shop No. XXUMX is located, which is the largest facility of its kind in the country and one of the largest in the world. It has dimensions 55х430 m. Shop No. 130 with the same width has a length of 50 m. These workshops are currently used for the construction of submarines, each of which can simultaneously assemble several massive structures. It is easy to see that the dimensions of workshops No.365 and No.50 not only meet the requirements of promising projects “Leader”, “Surf”, etc., but also cover them with a large margin.

The capabilities of other shipyards do not yet allow to carry out orders by the type of future destroyers or amphibious ships. Nevertheless, there are already plans to modernize existing enterprises, as a result of which they will receive new opportunities. Thus, over the next few years it is planned to upgrade the equipment of the Severnaya Verf plant in St. Petersburg. As part of this modernization, the plant will receive an indoor slipway with a new slipway. According to the available data, such an assembly site will allow building and launching ships of displacement up to 25 thousand tons.

Earlier it was reported about the possibility of upgrading the Admiralty Shipyards plant, as well as the construction of a new large dry dock in Kronstadt. However, this program was abandoned for a long time, and the St. Petersburg company did not receive a significant increase in production capacity. 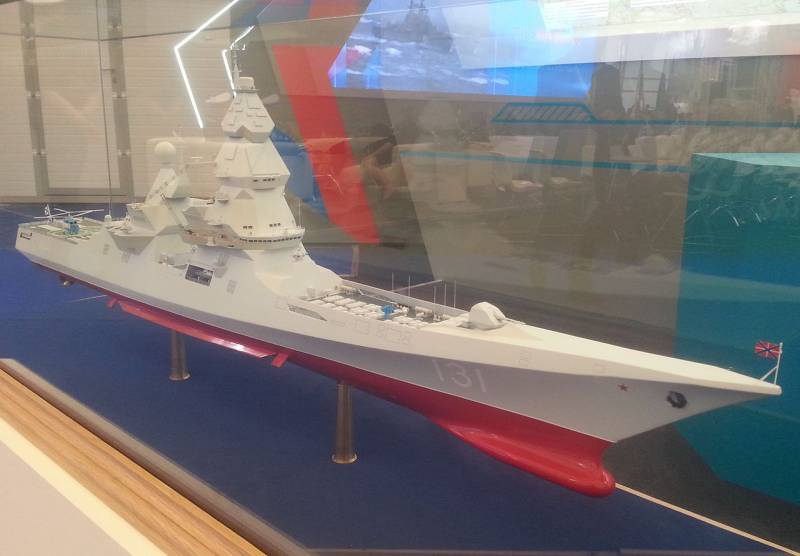 To date, the modernization of the Far Eastern Zvezda plant (Bolshoy Kamen, Primorsky Krai) has been launched. According to the results of the three stages of construction, which should be completed in the twenties, the new shipbuilding complex will become the largest Russian enterprise of its kind. The workshops, boathouses and docks of the complex will allow building ships with a displacement of up to 350 ths. Tons. In addition, the company will be able to produce offshore platforms and other special equipment.

Opportunities "Stars" after the upgrade will meet the requirements of new projects in the field of military shipbuilding. Nevertheless, there are certain factors that do not allow to consider this enterprise as a site for the construction of aircraft carriers, DVKD or destroyers. The fact is that the complex "Star" is now regarded as a civilian shipyard, which will carry out only commercial orders. As a result, the size of production areas that are of interest to the military is a response to the existing needs of potential customers. In addition, the specific location of the plant can seriously hamper work with related enterprises, mainly located in other regions.

Despite certain difficulties, the potential of the Russian industry already allows the construction of large ships. On the basis of known data, very optimistic conclusions can be drawn and it can be assumed that to start the construction of a “Leader” or “Surf” only the finished project and the corresponding financing are necessary. There are no serious difficulties with production capacities, which in principle do not allow building such ships. However, it is necessary to take into account the existing load of enterprises, in connection with which a significant part of the existing sites are already occupied by the engineering under construction.

It is also necessary to recognize that such optimism can be extended only to destroyers and landing ships. In the context of the development of the carrier fleet, such assessments may be premature. The construction of the 23000 project ship with a displacement of the order of 95 thousand tons is an extremely difficult task, including in the context of the capabilities of the available sites. Perhaps in the foreseeable future, such problems will be solved, but such work will be associated with a lot of difficulties.

In general, new projects for the construction of large warships, markedly different from those currently under construction, face the same typical problems. The limited financial capabilities of the armed forces, as well as the presence of several priority projects, make it impossible to quickly lay down the Leader destroyers and the Priboy DVKD, not to mention a promising aircraft carrier. In addition, the start of construction of new types of lead ships is postponed due to the lack of ready-made projects.

The current state of some domestic shipbuilding enterprises may be a cause for concern. At the same time, some of the existing problems are already being solved, and in addition, several programs have been launched to modernize certain factories. It should be noted that some projects for refurbishing plants only provide for the replacement of outdated equipment, while other programs offer the construction of completely new production facilities.

Currently, a number of domestic shipyards carry out orders for the construction of various combat ships of various classes. In the future, such construction will continue, but the structure of the portfolio of orders may change. The construction of large-capacity ships of promising projects that can have the most noticeable impact on the potential of the Navy will be present in the new state weapons programs. Implementation of such plans is associated with certain problems, but they are already finding a solution. The required work will not be simple and fast, but still will give the desired result.

Ctrl Enter
Noticed a mistake Highlight text and press. Ctrl + Enter
We are
Coastal Warships: Modern Approach"Svetlana". History of creation
50 comments
Information
Dear reader, to leave comments on the publication, you must to register.