In Kiev, the radicals are brought in from all over the country.

October 13 2017
68
On the Day of Defender of Ukraine, coinciding with the Day of the Ukrainian Insurgent Army * (UPA), (October 14), nationalists from all over the country will be brought to Kiev, writes the Ukrainian edition Strana.ua, familiarized with the plans of events in the Ukrainian cities for the coming weekend.


Several nationalist parties are calling for participation in the annual march, including the National Corps, the Right Sector * and VO Svoboda, which are banned in Russia. Nationalists are gathering "in tens of thousands of votes to honor the memory of Ukrainian soldiers." This year's march will be called the "March of Glory of Heroes." 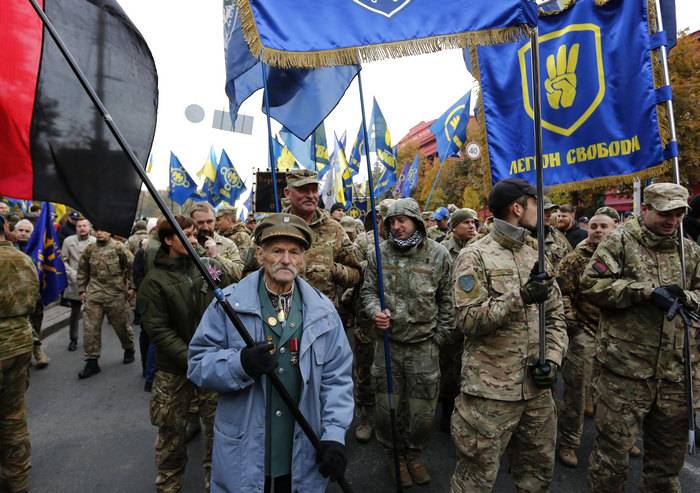 On the Day of Ukrainian Heroism, with tens of thousands of votes we will honor the memory of the Ukrainian soldiers - those who gave their most precious lives for the sake of the Motherland. The march will be dedicated to the memory of all the fallen fighters for Ukrainian Independence - from antiquity to the present day
- the radicals said

In other cities, such marches are not planned, said Strana.ua. Everyone willing to join will be brought by buses from Zaporizhia, Lviv, Kherson, Dnipro and other cities.

At the same time, there is information that the radicals are attacking the Kiev-Pechersk Lavra of the Ukrainian Orthodox Church of the Moscow Patriarchate, about which the prior of the Kiev-Pechersk Lavra, Metropolitan of Vyshgorod and Chernobyl Vladyka Pavel warned the authorities and security forces. But judging by the past marches and speeches of the radicals, if the attack happens, the authorities will not interfere.

The Ukrainian Insurgent Army is the armed wing of the Organization of Ukrainian Nationalists (OUN), which operated in Ukraine during the Great Patriotic War of the 1943 year. The leaders of the grouping were Stepan Bandera and Roman Shukhevych. It is known that the UPA acted against the Soviet partisans and collaborated with the Nazis.

Right Sector * is an extremist organization, banned in Russia.

Ctrl Enter
Noticed oshЫbku Highlight text and press. Ctrl + Enter
We are
Ukrainian environmentalists: Radioactive waste is brought under Kiev from the territory of 18 regions of the countryVerkhovna Rada legislated the Day of Defender of Ukraine for October 14 - the day of the creation of the UPA
Military Reviewin Yandex News
Military Reviewin Google News
68 comments
Information
Dear reader, to leave comments on the publication, you must to register.